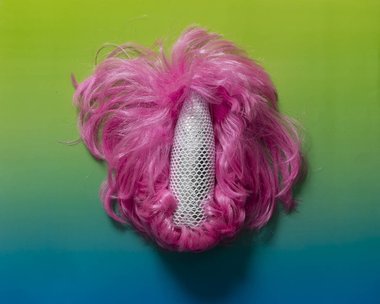 Two untitled prints nearby have a similar Post-Tridentine theatricality and flamboyance to them (the Vatican, after all, invented bling). What appear to be bottles wrapped in foil and nylon webbing, are nested in fluoro costume-party wigs. They summon up an array of disparate associations (as only Darragh can) from heads, Absolut Vodka ads, vulvae, reliquaries, Baroque cartouches, and 1960s/70s psychedelic graphic design. They are incredibly appealing to my eye.

Judy Darragh has been a fixture of the New Zealand art world since the Olympian heights of the 1980s. She was prominent in the establishing of Auckland’s Teststrip in the early nineties, and the subject of Te Papa’s first survey show of a living artist, Judy Darragh: So… You Made It? in 2004. The irregular aluminium foil planetoids of her installation Limbo have hung from in the North Atrium of Auckland Art Gallery since the end of 2015 and will remain there until March 26 of this year. She is not short of accomplishments…

And yet…why has the market not embraced her? Her prices have remained relatively static and lower than many of her peers. Is it because she’s a woman and the market is notoriously unfair to women? Yet the prices of many of her female contemporaries have not been so constrained. Is it her use of kitsch? While she may have pioneered that in New Zealand, she is hardly alone now, and her application of formalist aesthetics to the tack and trivial readymade has a strongly subtle Duchampian-cum-Eva Hesse feeling about it and her wryly abject visual humour predates British artist Sarah Lucas by a generation.

Is it because her work dares to be fun in an art-historical New Zealand milieu dominated by men with a penchant for dark palettes (with obvious exceptions like Pat Hanly who shared Darragh’s joie de vivre)? Is it that her whimsical recycling of found objects and middle-finger-to-conventionality palette contains a tacit criticism of consumerism and commodification? Allan Kaprow’s work was a big influence on Darragh and he categorically believed art should be merged with life, and that it should simultaneously affirm and deny the culture of art.

Probably it is an intersection of all these. They consciously defy an existence as commercial commodities. At Darragh’s show Ummm (as if asking that very question) at Christchurch’s Jonathan Smart Gallery, the work falls into five distinct categories, all works from 2016.

The most immediately accessible are the digital prints on paper. The Papercraft series, in the most lurid hues, cleverly puts a piece of elaborately folded paper (yellow on one side, magenta on the other) against a background tonally gradated background of yellow-green to blue or yellow to orange. To me these capture the distillation of Italian Baroque and Mannerist art, in particular the calculatedly difficult colour transitions of Pontormo and the elaborately convoluted drapery of Bernini. They revel in their artifice.

Two untitled prints nearby have a similar Post-Tridentine theatricality and flamboyance to them (the Vatican, after all, invented bling). What appear to be bottles wrapped in foil and nylon webbing, are nested in fluoro costume-party wigs. They summon up an array of disparate associations (as only Darragh can) from heads, Absolut Vodka ads, vulvae, reliquaries, Baroque cartouches, and 1960s/70s psychedelic graphic design. They are incredibly appealing to my eye.

In amongst the frivolity, Darragh reminds us that she can be serious beyond the disciplined approach to her practice. Darragh the feminist asserts her presence in the work Nice Fake Tits, a digital print of a US $20 bill, emblazoned with the title in a way that paradoxically recalls both Barbara Kruger and Billy Apple. Isn’t that exactly what some sweaty punter at a strip club might say as he thrusts the soiled, crumpled bill down a g-string for a lap dance? Perhaps there is a subtle self-deprecating acknowledgement that art necessarily objectifies everything.

Feminism is again key to understanding the Blue Stockings works, which consist of webs of nylon stretched around the edges of stretched canvases. The title of the series punning on a mocking term for an educated woman and the slightly sexy resemblance of the nylon webbing to garish fishnets. There is also, perhaps, an echo of the 1970s fetish for string pictures and macramé.

The Clear Light and Green Gaze works play with the trappings of New Age counterculture, the assemblages kitsch agate of sliced geodes, crystals, silicon and paraffin wax, stuck to clear glass in the former and canvas in the latter. They take up Rosalind Krauss’ “Expanded Field” and take it into strange, unexpected places. Painting emerges from the wall as sculpture, but like some Baroque grotto, and play delicious tricks with the light, sometimes reflecting the viewer back as if watching us as we look at them. The viewer becomes part of the artwork and is reminded of their complicity in closing the circuit of looking - not unlike Jeff Koons recent works where he inserts a reflective witch ball of coloured glass into a meticulously hand-reproduced old master painting.

Similarly the Built Paintings are as much sculpture as painting, incorporating expanded polyurethane foam. For me, foam is the ultimate semi-permanent medium of the Kristevan abject. It emerges from the can like a stool and expands into a very organic resemblance to one, in intestinal loops and tidy poops. Freud believed that the artist was unconsciously re-enacting the playing with poo of infancy, the first act of self-creation. Darragh enhances their formal qualities with a restricted palette of blue and white, like a Scottish Saltire or a postcard of the white-washed, blue roofed villages of Santorini.

The suite The Fates falls into more traditionally painterly territory, if fluoro spray paint on “very nice paper” can be regarded as traditional. The spray paint gives the paintings a vaguely graffiti feeling in which a hand, presumably the artists, has been used to mask layers, probably with a recollection of Aboriginal Australian hand stencil rock painting. The incorporation of the hand reasserts the presence and creative agency of the artist, though for me they don’t quite work as well as earlier works using posters and other found imagery as a background, or the more riotous compositions of her Pinewood Bend show at Dunedin’s Blue Oyster in 2013.

Darragh has always been an acquired taste, but like so many things described as such, life is all the more surprising and delicious having done so.