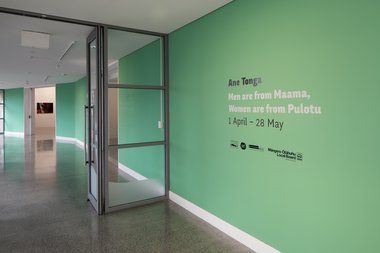 Ane Tonga's exhibition is split diagonally across two linked rooms, with women on the bottom / left, and men (surgical procedure and interviews) on the top / right. 'Grills' sees the decorative dentistry as symbols of Tongan beauty (faka'ofo'ofa), questioning and exploring some aspects such as sino lelei (an idealised, full figured body), ngingila (shininess), and sino molu (soft and supple body).

This Ngā Tohu o Uenuku show in Mangere re-presents Grills (2008-2014), the photographic exhibition about nifo koula (gold teeth) of six female relatives that Ane Tonga organised for the small gallery of the Gus Fisher a couple of years ago and shown again more recently in Hamilton. Now it has been expanded by including a new ‘brotherly’ series about Tongan masculinity, Fakaētangata (2014-2016), extending the participants to involve men as well as women.

The exhibition has interviews with both, and while most of the photographs of nifo koula show them in the mouths of women, the documentation of the dental procedure features the teeth of men. The interviewees are all Tongans living in New Zealand, and so because their dentistry occurred in Tonga, the subtext is that of a diaspora, the symbolism of this practice a Tongan adaptation of something imported from outside the Pacific.

The exhibition title comes from an article about Tongan society and its gender relationships, written by the archaeologist and historian Dr. Meredith Filihia, called Men are from Maama, Women are from Pulotu, and alluding to the bestselling book by John Gray about the psychology of gender. In Tongan culture, according to Filihia, women are from Pulotu, a paradisical island of plenty and constant regeneration, a before-and-after world, origin of life and chiefly heritage. Men on the other hand are of Maama: this world, a place that is a foil to Pulotu. Women (especially paternal sisters or aunties) have higher social ranking, even though they can’t own land.

Ane Tonga‘s exhibition is split diagonally across two linked rooms, with women (photographed ‘grill’ examples depicting only the mouth, lower nose and chin, and interviews) on the bottom / left, and men (surgical procedure and interviews) on the top / right. Grills sees the decorative dentistry as symbols of Tongan beauty (faka’ofo’ofa), questioning and exploring some aspects such as sino lelei (an idealised, full figured body), ngingila (shininess), and sino molu (soft and supple body). The interviews reveal the motivation for acquiring nifo koula includes pride in Tongan heritage, prestige in being able to afford the procedure, aesthetic or decorative (enjoying the gold’s colour and reflective qualities), and opportunity for design and conceptual innovation (the artist’s aunt has four letters lined up in a row saying ‘love’ - with the ‘o’ and ‘v’ made up of hearts).

Almost of the nifo koula recipients (men included) were inspired - or persuaded - to acquire them by their mother or some other female family member. However now, the government is considering banning the practice. Possible reasons include the fact that Tongan dental clinics often lack the equipment or training found in say, New Zealand, and that to make these adornments the teeth have to be ruined so they can be installed. Nifo koula has gone underground, with Tongan dentists now performing it under conditions of secrecy.

The Fakaētangata section, especially Tohoaki’i (to catch your eye), the video of interviews with male possessors of nifo koula, like Malimali (To Smile) in Grills, is a fascinating collection of interviews. One interviewee, a rugby player lets on (as does one of Tonga’s female relatives) that they are useful for hiding broken or chipped teeth, for nifo koula can wrap around them. Another spoke of his mother giving him a family ring as a reward for passing his fifth form exams, the next year half a ring for his sixth form exams, and then for the seventh form year - if he failed - half a ring for a nifo koula on his lower jaw.

Because there is no anaesthetic used, the trip and surgical process is a rite of passage for Tongans living outside New Zealand, a step for boys in acquiring manhood, as well as a distinctive decoration and symbol of their specific Pacific community. With the gold serving as an indication of wealth (some speakers in the Tohoaki’i video were sensitive to charges of exhibitionism or bragging, seeing it as more about identity) and the fahu system privileging with high rank the father’s paternal aunty or his eldest sister, nifo koula - as a body adornment - is the product of a highly complex social phenomenon.

Ane Tonga as artist, however, is not the dry ‘objective’ sociologist you might expect, for she - as an unseen participant using her own family community - has selected and grouped her material carefully, infusing an observant and poetic (even humorous) dimension in her Grills titles. Sometimes the subject’s name is used (Nan, Seta), or a reference to female attractiveness like Utu Loloa (Long Hair), Hinehina (Fair Skin), or an emotion, ‘Ofa (Love), and sometimes occasionally, an apparent family joke, Hoha’a (To Annoy).

This excellent and extremely informative Mangere exhibition is well worth visiting and investigating for yourself. Some of the links provided above might whet your appetite.