Kiwi Visitors to the East 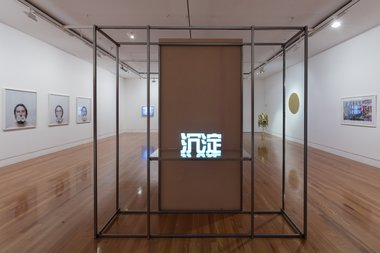 These contributions are consistently good and yet not necessarily coherent as a group. Although fragmented - these artists (of varied practice types and interests) have had studios in countries as disparate as China, Indonesia, India, Japan, Taiwan and South Korea - the show is exciting: a mixed bag in the best possible sense.

In this presentation of work from a dozen artists who have benefitted from the connections and funding of the Asia New Zealand Foundation, we find contributions that are consistently good and yet not necessarily coherent as a group. Although fragmented - these artists (of varied practice types and interests) have had studios in countries as disparate as China, Indonesia, India, Japan, Taiwan and South Korea - the show is exciting: a mixed bag in the best possible sense.

The moving image and photography component is especially impressive. Machine Wind, Fiona Amundsen and Tim Corballis’s film (screening in an adjacent room) I consider to be the show’s highlight, a fascinating examination of the rise of Japanese militarism in the late thirties, looking at the theories of Marxist philosopher, Tosaka Jun, his words (recited and discussed by Corballis) presented alongside archival film footage of Japanese military operations, and images of a military shrine in Singapore. This work follows on from Amundsen‘s dynamic show, The Imperial Body, at the Gus Fisher last June. Machine Wind can be viewed online here.

Jae Hoon Lee has two video screens butted together featuring male and female performers lifting dumbbells, but split so each screen has half a figure exercising their single arm with the weights. We don’t see coordinated lifting with both arms simultaneously. That lack of unity could be the reason they are here called dumbbells not barbells, for they are cast in the shape of pairs of Buddha heads: one in bronze, the other in volcanic ash and resin.

How does one interpret this fragmented activity, choice of materials, and possibly loaded title? Perhaps the work attacks the value of Buddhism as a social force that acknowledges both the heavenly and the earthbound? Or maybe the work does the opposite, and is like a Zen koan that promotes action that is free from the logic of thought or patterns of language - subverting the tyranny of the intellect by putting the body into automatic pilot?

Another fascinating video with paired screens comes from Matthew Cowan, with synchronised footage of two Japanese sportswomen practising golf swings and archery. Focussing on methods of fine tuning in order to achieve projectile accuracy, the video dwells on their patience, use of repetition, and positioning of a ‘mental’ target - to counter factors like wind or long distance.

Steve Carr contributes a sequence of four consecutive photographs, impassive self portraits but with an increasing number of shuttlecocks jammed into his mouth, that seems to be making a joke about sport and multi-lingualism. In these elegant but strangely disturbing images - they are subtly violent but symmetrically perfect - the sports equipment seems to double as a kind of feathery megaphone, or horn for verbal enunciation.

Christchurch photographer Tim Veling presents two photographs in glowing lightboxes, taken of villages and pathways in snowy Japanese landscapes. The detail and visual acuity of the local vegetation in these images startles. One photo has rushes and grasses poking out of a snowy bank but they look graphic and flat, as if rendered in an illustration.

Kushana Bush’s elegantly decorative gouaches on paper have the same delicacy, lots of intricate (or intimate) detail you can zero in on, a Klimtlike fussiness and elongation mixed with humour that comments on post-coital exhaustion. Ben Buchanan’s related vinyl-tape ‘paintings’ show no such restraint, and may look like pixelated mandalas, but in reality are central-state vulvas. Their large size, hot colours and hot subject-matter aggressively celebrate the power of the feminine.

The photographed collages of Kate Woods have a different type of politic. They look at the work of the radical Chinese Xiamen Dada group and their bonfires of their own artworks, but with her own motifs as well incorporated into a ‘documentation’ of their hardhitting performance/installation.

This show offers a rich selection of highly evocative items to think about. Some, like Reuben Paterson’s glitter covered synthetic plants, are well known, and are possibly over-exposed now. Most however, will surprise, inform and/or delight.