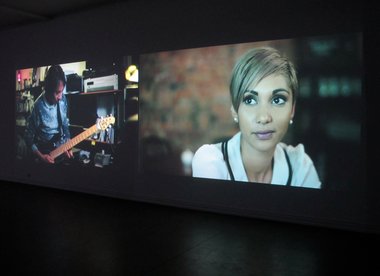 Gradually the music gets louder, and as notions of interiority and selfhood in the conversation get foregrounded we become aware of an appropriately overlaid, increasingly climatic and frenetic solo - watching also the little private smiles and ‘expressive' grimaces of the brilliantly improvising electric guitarist.

Currently on in Auckland at the same time as the large Robert Leonard curated Grant Stevens survey, What We Had Was Real at Wellington’s City Gallery, Hold together, Fall Apart - a dealer gallery show -presents three recent works in the large downstairs Starkwhite space. These present Stevens‘ usual theme of the ordinary non-academic person’s search for wisdom, their oscillation (when examining apparent banalities) between acceptance and cynical rejection. That within clusters of cringe-making clichés lie genuine philosophical insights and that sifting through the giggly non-sequiturs can produce pop psychology pearls. The trick is how to pick one from the other, or to decide if the possibly mischievous artist really cares.

With Our Thoughts We Make The World, 2014, is a two channel work that has a blues guitarist providing a constant musical backdrop. This varies from faint and discreet to eventually climatic waves of intense feeling that match the tone of a slightly disjointed but earnest philosophical conversation between a young woman and a male friend.

Here are some isolated samples from the dialogue:

(She) Words don’t express thoughts very well. Everything becomes a little different, a little distorted, a little foolish…
(He) Time is too large, it can’t be filled up. Everything you plunge into it is stretched and disintegrated…
(He) I exist, that is all. I find it nauseating…
(He) How well did you love, how full did you live, how deeply did you let go?

Gradually the music gets louder, and as notions of interiority and selfhood in the conversation get foregrounded we become aware of an appropriately overlaid, increasingly climatic and frenetic solo - watching also the little private smiles and ‘expressive’ grimaces of the brilliantly improvising electric guitarist.

Tranquility Falls, 2013 is a three minute work, where the words (alongside a spectacularly cascading waterfall) come and go on a vertical rectangle, alternating between top and bottom. Corny sentences like What we dwell on is who we become, challenges are gifts that force us to find a new centre of gravity come and go.

Sweetly arranged strings and acoustic guitar provide a soundtrack where they are gradually replaced by the sounds of turbulent wind and beating rain. At the same time the word sequences at the top of the screen start to begin prematurely more and more before the other sentences at the bottom are completed. In the end the fleeting phrases run in parallel, calculatingly frustrating even the most patient and attentive reader.

Haven, 2014 is similar. Ostensibly a New Age self help video (with the soothing aural ambience of a slick info-commercial) about simple relaxation, we see a slowly expanding and pulsing ‘tunnel’/amoeboid shape on the screen. It could also be spilt liquid. Gradually it dawns on you that this is really about masturbation and enjoying one’s own body. (This is your time, notice how you are feeling right now…Explore your private fantasies.) But as is often the case with Stevens, the ambiguous wit is accompanied by a sneaky twist. Though initially encouraging self pleasuring and letting the listener’s imagination run wild, the voiced over sentiments gradually become subtly derisive and slightly poisonous, before falling back into condescension about the guilt they have helped perpetuate. (For a moment you feel slightly less pathetic. Thank yourself and return to the physical reality around you…)

This is clever writing (or modified appropriation) from a great Australian artist, and I’m deeply envious of Wellington audiences having the opportunity to see the larger Leonard organised exhibition with its far wider range of work. It’s a shame it is not coming to Te Tuhi, Artspace, or St Paul St, although such a non-exclusive approach - for art tourism reasons - may not be on the organiser’s agenda.