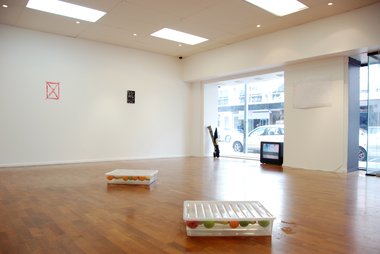 Sometimes one gets the feeling that we, the viewers, are being asked to give conceptual art an easier ride, indulge the artist or the work simply on the basis of it being idea based. It's thus given automatic and extra cachet merely for what it is. No such indulgence is required or asked for the current conceptual show at Pilot in Hamilton.

In a broad, generic sense conceptual art was born in 1915, just after the war broke out, and it never died. Dada (the precursor) introduced to the art world the pre-eminence of theory and idea over the retinal, as Duchamp expressed it. It has morphed since then, getting a second wind in the sixties after a hiatus when it discarded its nihilistic edge, breeding performance, Fluxus and process art. It is alive and well today in various guises, becoming the darling of curators at the top end who gush liberally over digital, video, internet and installation art. Some might claim that the term itself has become meaningless through overuse, but used generically to signal the primacy of the idea over the aesthetics of the pictorial, the label still has a place.

The reasons for its popularity among the art cognoscenti are fairly transparent, but it has to be said in its defence that when done well, conceptual art can trump the more conventional modes of creative endeavour. However it does often fail to live up to its billing, particularly when the idea is translated poorly, becomes repetitive, or is simply over intellectualised. Sometimes one gets the feeling that we, the viewers, are being asked to give it an easier ride, indulge the artist or the work simply on the basis of it being idea based. It’s thus given automatic and extra cachet merely for what it is.

No such indulgence is required or asked for in the current conceptual show at Pilot in Hamilton. Three Auckland artists are showing at the new Ward Street gallery (No. 5 Ward Street): David Ed Cooper, Thomas Hinton and James Wylie. What pulls their work together as a unit is not just the fact that their work is notional but there’s a shared overarching link to the notion of urban ambience. The idea they begin with is the perception that landscape is often forgotten about in an urban setting, that the city itself is the landscape urbanites live in.

Called RE: 400, the title refers to the now defunct Hamilton street car race the City Council backed and bankrolled to its later financial embarrassment. However rather than being consciously critical or political, the show has a light and sometimes whimsical touch, even a celebratory feel that embraces and celebrates the notion of cityscape in all its gaudy and quirky humorous ways.

One of the funniest ‘art’ works (and we’re using the term loosely here because another thematic unity operating in the show is the idea of approximation - that the pieces deliberately merely aspire to be art works and perhaps become such in the process of doing so) is the work of Thomas Hinton.

Entitled, Macphearson Men, the backstory involves the artist painting his mother’s house, stripped down to his underpants because of the heat and in the process of painting, wiping the spillage and excess onto his underwear. The splattered undergarment, Elle Macpherson range, was subsequently cut up and pulled over a stretcher to become an abstract creation, a gestural white on black production.

There are countless ironies and innuendoes operating here, but one of my favourites would have to be the dig at all the macho men, (Jackson Pollock and Co.) who worked the abstract expressionist trope back in the forties and fifties. Not often will conceptual work produce a laugh out loud moment. Hinton’s 33% Extra Free, using the same tack, sees pink toothpaste smeared on greaseproof paper in the shape of an X inside a delineated square, recalling Allen Maddox doing a wild de Kooning-like stroke. The mint smell of the toothpaste is still present, making the lampoon extra delicious.

David Ed Cooper and James Wylie continue the mode of aspirational art in their deliberate attempt to mimic ‘badly’ or comically with urban pizzazz the notion of a Still Life. The work consists of real fruit suspended in water inside a transparent plastic container with lid. Real apples, bananas, oranges float in an under-bed storage unit, motionless and thus very still. Art meets life which thus becomes art.

David Ed Cooper’s second contribution has elements of an altered readymade similar to the Gala x 2 floating fruit work. Scent 1 is made up of painted wood chips which are then simply adhered to the wall of the gallery via a sheet of Duraceal. The final appearance evokes a handmade abstract that might recall George Mathieu or even Malevich. Playful, cheeky and superbly irreverent.

The most engaging and complex work in the show is Bang, by Hinton. It’s a two part piece involving super 8 film, a pint of Guinness, a Guinness T shirt and a branch from a Hawthorn tree. The work has a long background but in brief, the father of the artist, living in England in the late seventies, made a short movie involving a toy gun in a forest that included inscribing the word “bang” in dirt on the forest floor. The father, who belonged to the 500 Guinness Club subsequently dies, the son moves to New Zealand, becomes an artist and replicates a version of the footage of the movie here in New Zealand against the backdrop of the sea - where the word “bang” is again drawn, this time into the sand.

Apparently belonging to the 500 Club means you receive the said T shirt each year, and the tradition continues on to the son despite the death of the original recipient. This must be one of the most elaborate and moving memento mori works on record, involving a creative process spanning a forty year period.

The final work in the show is a collaborative performance piece recorded on video where Hinton gives fellow artists, Wylie and Cooper a real hand-poked tattoo the form of which (a squiggly line resembling perhaps stylised hill formations) is based on a wall piece by Wylie - a wavy line of PVA glue which has had paprika blown onto it. The tattoo, incised on the arms and legs of the artists, recalls something of the extreme performance pieces of Marina Abramovic.

All of the items used in the art works were purchased in the city of Hamilton, including the Guinness. They’re all noted on Wylie’s wall map. At the opening, instead of the usual wine and cheese, the artists ordered takeaway pizzas, an urban dish in keeping with the down-home spirit of the show. Hinton made a pizza from concrete and sat it on top of one of the discarded pizza boxes as a makeshift plinth. You couldn’t get more celebratory urban than that.