Heaphy and Hughes in Christchurch 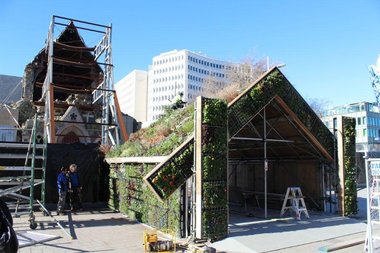 On Saturday 6 July Cathedral Square was reopened. It was the first time since the earthquake that devastated Christchurch in 2011 that the public had access to the symbolic centre of the city. Art is one way of re-enchanting a damaged public zone, to encourage the local people to once more feel an emotional connection with the city, resulting in dramatic installations by Chris Heaphy (Ngāi Tahu) and Sara Hughes that reflect Ngāi Tahu's historical relationship to the area.

Temporary Public Art in the Square

On Saturday 6 July Cathedral Square was reopened. It was the first time since the earthquake that devastated Christchurch in 2011 that the public had access to the symbolic centre of the city. Art is one way of re-enchanting a damaged public zone, to encourage the local people to once more feel an emotional connection with the city, resulting in dramatic installations by Chris Heaphy (Ngāi Tahu) and Sara Hughes that reflect Ngāi Tahu’s historical relationship to the area. The Transitional Cathedral Square Project was initiated by Christchurch City Council in collaboration with Te Rūnanga o Ngāi Tahu and Christchurch Art Gallery.

In Roman cities, the quadripartite Etruscan plan was based on the existence of two main orthogonal roads, the cardus and decumanus. Where the two roads intersected - the mundus or centre - the Forum and the main temple or Capitolium, the most important social sites, were located. The layout of Christchurch is similar and today Cathedral Square - even if not as lively as it was before suburban malls sucked the life out of it - remains a symbolically highly charged place, a focal point. Any changes to its built environment have significant implications as evidenced by the furore surrounding the installation of Neil Dawson’s Chalice in 2000.

Situated immediately in front of the Cathedral and suggestive of the security fencing that once barricaded many of the city’s streets, Heaphy’s geometric and symbolic style is immediately recognisable in the form of large black panels emblazoned with patterns of sign and symbol, blending Pākehā and Māori symbols (an allusion to Heaphy’s exploration of his bicultural identity) in circular patterns that suggest the Cathedral’s since removed rose window. Western butterflies symbolic of new life mingle with apotropaic manaia forms to ward off misfortune. Other forms suggest Pennsylvania Dutch hex signs, mandala and other talismans of protection, as well as architectural features.

The panels form a backdrop the other component of Heaphy’s installation: a Māori whare covered in live plants, many of them flowering in an obvious symbol of regeneration and an allusion to the kāinga nohoanga, Puāri, a major mahinga kai (customary food gathering place) located on the nearby banks of the Ōtākaro (Avon) River. There is perhaps also an echo of the playful pop spirit of Jeff Koons’ colossal exercise in flower arranging, Puppy. The proximity of the whare to the ruined shell of the Cathedral forms a visual link between the spiritual life of Ngāi Tahu and the Anglican Community - Christchurch being settled under the auspices of the Church of England and the pre-quake Christchurch Cathedral being the most obvious symbol of the city.

Hughes, also keeping to a theme of considering how the barricades changed the city, has contributed a towering flag wall and created bright patterns by inserting painted plastic cups into the mesh of security hurricane fencing. She was inspired by the embroidery in the Johnstone Collection of art and decorative art of the University of Canterbury, tukutuku patterns, and perhaps also by the kinds of spontaneous artworks similarly improvised in the fences, in memoriam and in protest, back in the days of the barricaded city. The use of industrial and mass produced materials firmly anchors the work in Hughes’ oeuvre , a creative process notable for innovative adaptations of commercial readymades and objets trouvé.

The art suggests some interesting questions as to how public art participates in revitalising a ruined community. Christchurch seems to be taking the cheerful and optimistic path in its post-quake artistic interventions rather than, say, something more meditative like Ossip Zadkine’s De Verwoeste Stad (‘The Destroyed City’) in Rotterdam, for example. It is an approach comparable to the pilot programme funded by Arts Queensland Australia Council for the Arts to support community recovery in three of the areas worst affected by the natural disasters of 2011. Perhaps it isn’t overly profound work, per se, but it is immediately accessible and intelligible by anyone. This is essential when the purpose of the art is to draw the public in, reduce feelings of isolation, encourage hope, and bring back to life the city’s dead heart, providing an overriding metanarrative to draw the fractured community back together and give them a sense of place to reconnect with.