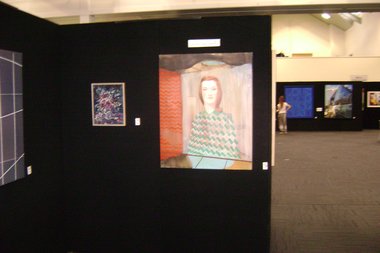 It’s certainly multifaceted, which is a good thing. No hegemony here, though the prescription of the award itself does deny other forms of art. But apart from a handful of works presented, the same old ground seems to be getting reworked without any serious advance.

Art competitions, by their very nature, hamstring the judge/curator. They have to deal with what they’re given and it’s only at the next stage in the proceedings that real selection takes place. You work with what you’re presented with.

Blair French, Director of Artspace Visual Arts Centre, Sydney, this year’s judge of the New Zealand Painting and Print Award, was given a large range of paintings and prints to deal with for the 2013 show, organized by the Waikato Society of Arts, Hamilton, and sponsored by the Philip Vela Family Trust to the tune of $20,000.

Nice work if you can win it. And the winner was Kirsten Roberts for her piece entitled Ocularis, a painting that plays with figure and abstract and the old outside and inside trope, a game fidgeted with by many artists before, Frances Hodgkins to name one.

A game the audience can play is “pick the winner” before it’s announced, a minor diversion to while away the minutes and test one’s own powers in the predictability category. It’s a simple exercise, especially if you’re up with the play with regard to curatorial predilections.

Of the forty eight works hung, just over half were of abstract orientation while at the other end of the spectrum the remaining entries formed a variety of figurative constructions, everything through to hyperrealism. There was also the usual pretentious art blab from artists to add to the entertainment. Who could go past stuff like, “the exploration of process and of horizontality”?

Some familiar faces keep turning up each year, artists who must do the competition rounds, but there were some pieces that demanded one stop and take a second look.

Barbara Smith’s Tiny Silent Events was an intriguing creation on perspex and vinyl, scratch marks and doodles, a sort of quieter version of Cy Twombly on a much smaller scale.

Kathryn Steven’s Cloak, (oil and flashe vinyl on canvas) possessed a nice modulation of colour and a dynamic format involving an inventive use of the grid.

The monoprint and intron print on book pages by Anneliese Hough, called Warp, weft, word, phrase,  accompanied by her own poetic gloss - (“Handsome language, you are a comfort blanket through the weave, in the space between that is where the rest of ‘I’ exists.”) combined figure and abstract in a delicate, engaging way.

Ayesha Green’s painting, Three as One Chair, needed no annotation and wasn’t given one, sufficient as it was unto itself. One couldn’t help think that this was a sly reference to Joseph Kosuth and his famous One and Three Chairs of 1965, ironically and cleverly reversing the conceptualists ban on traditional aesthetics. Perhaps Green is a Stuckist, but the added delight in this painterly work was the fact that it was rendered with simple charming understatement.

French made special mention of Mark Braunias’s The Male Gaze, (acrylic and book on board) which of course was a shoo-in given its subject matter.

What does all of this have to say about current and contemporary art practice in New Zealand? It’s certainly multifaceted, which is a good thing. No hegemony here, though the prescription of the award itself does deny other forms of art. But apart from a handful of works presented, the same old ground seems to be getting reworked without any serious advance.

And where are the works that deal direct with the human condition? “Find me a philosopher to help me in my old age”, the American artist Edward Hopper is reputed to have said. Has art forgone such exploration? Bring back McCahon, Michelangelo, Rothko, Giacometti. Or is that too much to ask from a couple of tiny Islands? And too much a modernist cry?