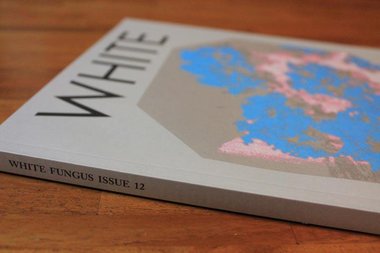 What is distinctive about the editor Ron Hanson and his brother co-designer Mark, is their individuality, their quirky diverse passions, their enthusiastic enthusiasm for their own taste. It is unabashedly fragmented, lacking any kind of thematic cohesion at all - only personal inclination and using a circle of trusted friends with specialist knowledge to help out.

It’s the best and fattest issue so far - # 12 - this vibrant collection of White Fungus‘ outspoken opinion, global information and entertaining reading, that is now being published with better paper quality. Printed comparatively cheaply in Taiwan where its editor Ron Hanson lives, the magazine (now with lots of Taiwanese content, some in Chinese translation) is currently getting a lot of recognition: this issue is included in the Millennium Magazines exhibition presently on show at MOMA in New York.

White Fungus is driven by activist politics, a concern with global issues and post-colonial history, mixed in with a love of experimental music, art, literature and comics. What is distinctive about the editor and his brother, co-designer Mark, is their individuality, their quirky diverse passions, and the unflagging enthusiasm of their own taste. It is unabashedly fragmented, lacking any kind of thematic cohesion at all - only personal inclination and using a circle of trusted friends with specialist knowledge to help out.

With the artist interviews (Carolee Schneemann, Yan Jun, Yao Jui-Chung) conducted by Ron Hanson, the flavour of the conversation is quite different from what you’d normally find in an art magazine. The discussions are sometimes rambling or wildly freewheeling; and give you a genuine sense of the interviewee’s personality. Plus there are also articles on artists (like Simon Denny - written about by Andrew Paul Wood) in the form of more carefully structured, conventional journalism.

Actually, to call this just an ‘art magazine’ is inaccurate. Politics and activist art are the dominant components but the ingredients tend to be a swirling mix, with lots of (as mentioned) music and literature, plus anthropology and history - all in the form of well researched articles by experienced writers.

For my own tastes, from looking closely at the three most recent issues, I now have a sense of what White Fungus contributors to look forward to with special anticipation. Ron Hanson is a gifted journalist who creates a lot of the publication’s content. His interviews and articles show great rapport with his subjects whom he skilfully draws out with carefully researched questions. Carolee Schneemann talking about her anti-Vietnam works of the mid-sixties, and feminist works of the early seventies is pretty amazing, as is her obsession with her cats. Of his articles, the one on Chen Chieh-jen reminds me of this artist’s remarkable Factory video Tobias Berger put on in Christchurch in 2004 as part of SCAPE.

I am particularly partial to Barry Linton‘s exotic Sci-Fi comics, made with glowing coloured pencil and loaded with cross-sectioned diagrams as if from Look and Learn or a child’s encyclopaedia. In this last issue he presents illustrations of different varieties of flying saucer, notably cyclotrons, synchronators, eternitrons and eventuators, lucidly explaining their developmental history, speed and firepower capabilities.

White Fungus‘s music tends to be experimental jazz, improv, noise or electronic, and often the performers interviewed in one issue appear in the enclosed CD of the next. The main music writer is Tobias Fischer who provides the sort of engrossing detailed information you expect to find in a specialist magazine like Wire. In White Fungus #12 he writes about accordion player/composer Pauline Oliveros, and Hanson interviews Annea Lockwood about poetry from Guantanamo Bay. Articles on these two musicians in general are quite rare.

Of the other regular contributors, Terry Bag writes in depth on nuclear testing in the Pacific, discussing the various personalities that shaped Aotearoa’s policies towards it, and the history of the protest movement. For readers under forty it is probably especially interesting to read this clearly set-out overview of our country’s participation in international events from the sixties on.

With this magazine, while its audience know that much of its writing will be passionately arguing for various leftwing causes, or promoting a certain kind of musical taste, other things densely packed between its covers will surprise. As an appetite-whetter - a generator of new intellectual explorations - it can’t be surpassed.