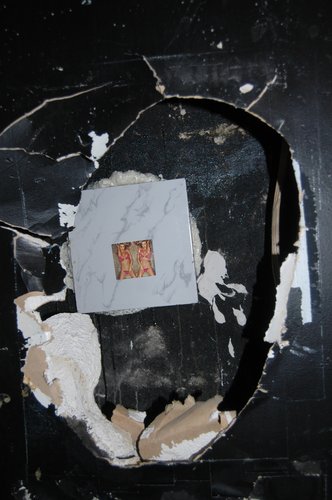 A lot of the work (Clement's especially) is Simon Dennyish in its exploration of digitally printing found images on odd surfaces. I found that stuff a bit icy and got more excited by the found and tweaked ventilator bits presented by Champion, and Clement's nutty Schindler and Montgomery escalator vids. The latter you can easily find on Youtube anyway.

Queens Chain sounds as if it is about the political control of and access to peripheral space, the title (a version of Queen’s Chain) referring to a side door that on opening night provided access to the building housing the basement and upper floor of Snake Pit - and featuring a staircase and some tiny narrow rooms not normally utilised. Although there are only five artists nominally showing here there are also the occasional guest appearances of work by friends.

Kennedy, Clement, Beekhuis and Tocker are quite individually distinctive, though overall the whole show - to be somewhat reductive - has a chaotically Gambia Castle ambience. The lighting is varied, within the building and throughout the day, making the work extremely hard to photograph accurately. The actual gallery illumination is not as grey or pink as the images here indicate.

Andrew Kennedy likes to make inkjet images of Northland landscapes or large container trucks and place them within mediating framing devices, such as planar sheets behind them, or within the screens of pictured monitors. This implies I think emotional distance from the visual content, a claim of indifference, a buffer that prevents immersed infatuation with the subject matter. Some of Ben Clement‘s digital images (or lighter stickers) positioned on ceramic tiles that have been propped up in holes in the wall, or cemented to the floor, again revel in unorthodox ‘framing.’

The most interesting work from Clement is a video frame taped to a long glass internal window where two-way mirror film is placed (bubbly and wrinkled) on the other side of the glass. The videos consist of eight bizarre clips of different escalators found in American shopping malls and department stores. These films are hard to see because of the reflections on the silvery film, the sheen from a nearby outside window that hides the moving imagery. Looking through that internal window from the other side emphasizes Clement’s black gaffer tape which formally interacts with a block of black vertical lines (The Box) positioned by Katrina Beekhuis on the far side of the room - an allusion to the original nightclub that was in the basement.

Beekhuis and Clement thus have a knack of collectively creating vibrant conversation through works that interact - despite their spatial separation. Another example is a printed-on mouse pad by Clement, on the floor and leaning against a wall. Its drab greyish colours repeat the sombre tones of a curtain Beekhuis has installed nearby on a wall, on a tracking rail. Singly the elements are forgettable, but together (perhaps coincidentally, perhaps not) they form something interesting.

Most of Beekhuis’s work here dwells on domestic fittings built or placed in the gallery through skilled carpentry - but not especially memorable (in terms of sensuality or idea) in their own right. They are a form of handcrafted readymade, not in the sense of replicas like Glen Hayward, but more like the product of a tradesperson - carefully built shelving, carpet and drapes fitted to be unnoticeable. More readymade service than readymade store item.

Oliver Tocker has made a set of cement coated, carved and crumbling polystyrene tables and chairs for the opening night festivities, and Champion’s paintings are found pieces of battered air conditioner that have gone mouldy and streaked with green, with occasional added highlights of cigarette filters stuck on with blobs of fluorescent orange paint. As gently tampered with, oddly shaped battered objects, these ‘found’ paintings are intriguing pieces of detritus, as are Champion’s blue lit installations in the skinny bedrooms.

Only the top floor has strong lighting so you have to peer intensely (or wear strong specs) to investigate the rest of it. To quote a Dylan line, it ‘looks so immaculately frightful’, for the shambles downstairs and in the stairway is deliberate. A lot of the work (Clement’s especially) is Simon Dennyish in its exploration of digitally printing found images on odd surfaces. I found that stuff a bit icy and dry. I got more excited by the found and tweaked ventilator bits presented by Champion (despite the appalling way they are hung) and Clement’s nutty Schindler or Montgomery escalator vids. The latter you can easily find on Youtube anyway - and are fun to watch at home.