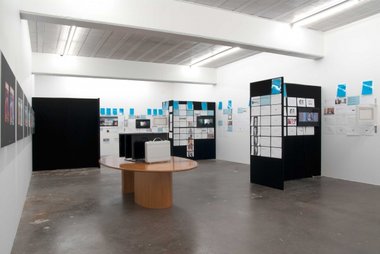 Yet Denny seems mesmerised by the capitalist ethos of this corporate community (most companies here being in Fortune 500 listings), almost thrilled by it. Alternatively his interest might be seen as a form of Warholian voyeurism, a titillation by the processes of making money, the mechanics and strategies of online global marketing.

As Simon Denny exhibitions go this is a particularly immersive installation, the A4 printout and canvas panel-covered walls and projecting screens being used to examine two forms of video publication, one a hard copy magazine that appeared after the eighties share crash, and the other a much more recent website using videoed testimonials for selling a digital board portal that presents essential corporate information on the laptops of board trustees.

First of all, whatever the reasons Denny has for being fascinated by corporate marketing within its own community, his treatment of both these products is highly entertaining when it comes to splicing in allusions to painting methodology and stretchers - something understood by the art community.

For the magazine Corporate Video Decisions he has made double panelled canvases (repeated in cross-section, not as extended planes) one hidden behind the other and in the wide rectangular format of a modern plasma screen. On the front one he has an image of the original magazine cover and on its right that cover photographed as if on an old television /video screen, distorted to fit the old screen proportions and given the optical granular textures of that medium. To speak McLuhanese, the medium here is the massage and the message.

The stacked club-sandwiching effect of these ‘paintings’ alludes to easy mechanical repetition, the sequencing of events within art history, and art feeding off itself. On an oval table Denny has aligned a group of plasma screens between two suitcases referencing the other product examined in his show, Diligent Boardbooks, digital portals that replace paper folios and dossiers as information sources for board committee members.

He also has some single canvases projecting out from the wall in Perspex boxes. On these and covering the walls are printouts from the Diligent marketing site and screens displaying interviews from enthusiastic reference providers. Denny is obviously curious about the use of a hardcopy magazine to promote video and a site using video to plug a software programme - in times of recession to reach corporate clients. And fascinated about corporate power’s embracing of time-based media like video as a means of facilitating sales, a method that through computers has replaced face-to-face interaction and printed brochures.

Much of this installation involves the obsessive printing of documents from the various headings within the Diligent site and using them to make quite an overwhelming installation as they seem to cascade down the walls. Yet Denny seems mesmerised by the capitalist ethos of this corporate community (most companies here being in Fortune 500 listings), almost thrilled by it. Alternatively his interest might be seen as a form of Warholian voyeurism, a titillation by the processes of making money, the mechanics and strategies of online global marketing.

This is an intriguing, uncharacteristically sprawling exhibition that transforms the smaller inside Lett space, one that is comparatively clinical and a far cry from the warmth of Denny’s earlier more organic, slightly hippie projects. Yet surprisingly it works, is not too dry, and ends up being subtle in its possible critique of corporate banality and its asinine, excruciatingly bland representatives.

Oh that's a good point, Jim, that I didn't realise the significance of. That Diligent are based in Christchurch and ...

I think you'll find that the software was developed in New Zealand which was part of the mix.

Certainly not biographical per se, but perhaps experienced or otherwise observed in the milieu. Having spent time in Frankfurt myself, ...

What is it with responses/comments on your critiques?
Where are they?
Are people afraid of being “wrong”....of being exposed as philistines at best or just morons at worst??
I am a post grad student at A.U.T and I don’t give a f**k what the Auckland art establishment thinks of me. Incidentally at Elam the students are required as part of their curriculum to blog their theoretical opinions....are no students interested in doing so if it is not part of the institutional regime? So much for “critical” thinking...in the absence of a A plus and a possible slot in an art institution, or chance of a curatorial exercise on K rd somewhere....it seems that engaging in discussion about our common culture just out of interest or curiosity is a foreign concept.
Killed by “criticality” as a means to an end.
Having cleared that particular log jam of invective let me comment on Denny’s work...
First off...I find it boring. It doesn’t hold my attention long enough for me to dwell on its somewhat earnest incursions into “capitalism is bad” territory. That’s not to say its “bad” art. For similar reasons I find the whole Warholian thing of endless movies of prominent buildings boring too. However I have been taught here at A.U.T. that boredom is not necessarily a sign that the art is lousy....in fact the message I get is that boredom could be the response to really good art as it means that such art undermines our media/corporate shaped desire for immediate gratification.
So the installation’s blandness is a “good” thing, then. Its good art precisely because it is boring.
At least that’s what I, and apparently John Hurrell...are told to believe.
However, that said I do get something from the scale and sense of obsessive energy entailed in the whole installation. However if I was a corporate type person I’m not certain if I would find it offensive....so if that’s its intention it fails on that score...not that I happen to think any artist has an “intention”.
Incidentally having just this afternoon visited the renovated Auckland City Art gallery and gaped at the huge fake flowers in the atrium/foyer area I am similarly undecided. It certainly does puncture bourgeois tastes in the same way Koon’s huge puppy pisses over them....but beyond a one-liner what else does it say???However as I gazed at them I found myself changing tack....cartoony kitsch does have its merits.


Reply to this thread

Where were you told that boring art means high quality? What moron told you that, Ross? With some work you might go past a certain threshold where boring suddenly transmutes into excitement, like an athlete's 'second wind' - but that's not the same. Art lovers aren't expected to flagellate themselves. The bodily experience is crucial. Pain is pain, not pleasure.

I never suggested Denny is boring. It is not Warholian in that it is ostensibly repetitive - even when opaque Denny is never that. It is concept based (idea as motor) and so not reliant on inventiveness within the installing process once it has started.

I wonder if it's the influence of being based in Frankfurt a lot? - On the one hand it's a city of banks and corporations, the financial hub of Europe (and a bit kitschy hideous with the new architecture and bad public art), on the other it's the birthplace of Goethe and has incredible art galleries and museums all along the banks of the Main.

Although some artworks can be consciously separated from personal biography (as a wilful strategy) you might be on to something here, Andrew. Even though America is the marketing source of the magazine and board-room software.

Certainly not biographical per se, but perhaps experienced or otherwise observed in the milieu. Having spent time in Frankfurt myself, there is a definite kind of deja vu for me in that regard. And unfortunately America exports its corporate culture - it's a universal cancer now.

I think you'll find that the software was developed in New Zealand which was part of the mix.

Oh that's a good point, Jim, that I didn't realise the significance of. That Diligent are based in Christchurch and New York, and that the software was developed in NZ.