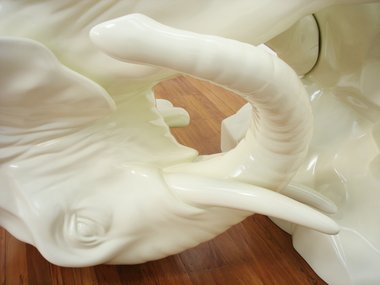 The parading cleverness of Parekowhai's art speaks about inclusiveness of community, critiques 19th century colonialism and effortlessly dismisses cultural cringe. It's an impressive performance, yet also one that plays to the converted, almost a placebo for museum and gallery professionals and their audiences.

Dominating Jonathan Smart’s gallery is a single sculpture by Michael Parekowhai, Te Ao Hurihuri (the world turns slowly). This large, seriously oversized bookend, inelegantly balanced by the figure of an elephant standing on its head and connected to a sprawling base upended against the gallery wall will be familiar to anyone who saw Parekowahi’s 2009 exhibition at Michael Lett’s gallery, The Moment of Cubism. Isolated from that show, it’s a no less impressive work of art, as family-friendly and entertaining as it art-savvy and irresistible to art historians and curators in its appropriations of local and international cultural references.

Smart commented that the decision to transport Te Ao Hurihuri from Auckland to Christchurch seemed like the ‘right thing to do,’ following the events of 22 February, and with the current absence of dealer galleries like the Brooke Gifford and the Christchurch Art Gallery still closed, Te Ao Hurihuri already feels like an exhibition highlight for 2011. As though Parekowhai has reminded the local community that works of art can be magical objects, this installation is informed by all the accompanying puzzlement, pleasure and cleverness that a single work by the artist can muster.
Simultaneously, Parekowhai does the ‘wow’ and conundrum factor in a way that his contemporaries can only dream of.

Indeed, the parading cleverness of Parekowhai’s art has been critical to its authority and also its constraints throughout his career. It entertains children and drives academics to overtime on their laptops. With intelligence and charm the artist’s work speaks about inclusiveness of community, critiques 19th century colonialism and effortlessly dismisses cultural cringe. It’s an impressive performance, yet also one that plays to the converted, almost a placebo for museum and gallery professionals and their audiences.

Te Ao Hurihuri is no exception. Rich in narratives and references to the history of Western Art, it is an interpretative goldmine: The wedgewood bookend and elephant as a symbol of nineteenth century colonisation, the classification of indigenous culture by Western society, the appropriation and intellectual ownership of same, the elephant in the room as a metaphor for collective denial of a glaringly evident problem, and the larger-than-life scale of the work, inviting all who view to reflect on their perception of familiar objects and known ‘truths.’ No New Zealand artist has ever created work so well-suited to the country’s art institutions.

Yet in spite of these reservations and the frustration of being constantly aware of the way Parekowhai art charms and challenges, it is seriously difficult not to be won over by the performance. Constructed in aluminium and fibreglass, and painted in shiny automobile cream, Te Ao Hurihuri is also more than a series of ideas and concepts. As a piece of sculpture, it is a sensuous and beautiful object, complete in its consideration of form and space, and delightful in its play of light and undulating surfaces.

Where many of Parekowhai’s contemporaries, and those immediately following his example, make works of art that seek to consciously entertain gallery audiences as a point of entry for more serious considerations, few are capable of sustaining the accompanying intellectual gravity and level of commentary that Parekowhai’s work encourages. Just as the hard-edged Pop-Art regionalism of Robin White and Don Binney perfectly expressed the cherished values of the New Zealand art world in the mid to late 1960s, the irony, appropriation, wit and humour of Parekowhai’s art seems so right for the early decades of the 21st century.