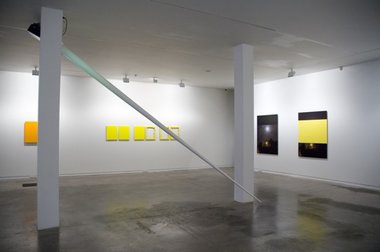 If one has the view that earlier modernist attempts to separate the world from the art borne within it were always misguided, that the most austere geometric work always has visual similarities with certain forms in nature, that all ‘realistic' painting is abstracted anyway (simply by being ‘art' and being in two dimensions - unlike ‘life'), and that even when looking at a blank canvas, one is aware of 'the world' in the form of amoebae scooting over one's eyeball, then perhaps Thomas is overstating his case. Being ‘AMID THE WORLD' is hardly a big deal.

David Thomas, a highly regarded art educator and artist from RMIT in Melbourne, has here organised a show with an international mix of artists that present works in varied media riffing off a postmodern approach to monochromatic painting. Instead of looking at antecedents such as the ‘inventors’ of the genre, like say Malevich or Rodchenko, one sees salutes to contemporaries like say Baldesarri (Thomas and Sequeira), McCall (Mackrell) or Polke (Benson). There is no interest in the transcendent. Instead of symbolism, colour as a physical phenomenon is overlaid with light and time.

Thomas puts it this way in his brief catalogue essay:

the exhibition brings the monochrome into the twenty-first century where it is employed as a device to manifest an awareness of colour, light, movement and time AMID THE WORLD in order to help us see our experiencing of the world.

Of course if one has the view that earlier modernist attempts to separate the world from the art borne within it were always misguided, that the most austere geometric work always has visual similarities with certain forms in nature, that all ‘realistic’ painting is abstracted anyway (simply by being ‘art’ and being in two dimensions - unlike ‘life’), and that even when looking at a blank canvas, one is aware of ‘the world’ in the form of amoebae scooting over one’s eyeball, then perhaps Thomas is overstating his case. Being ‘AMID THE WORLD’ is hardly a big deal.

However this show is clever in its selection - full of surprises - and a great introduction to New Zealand audiences of certain artists not known here. One can break down the (usually overlapping) elements within the three part title, linking them to certain contributing individuals by looking at the dominant characteristics:

The first is COLOUR…in the sense of the original holistic unmodulated monochrome, is a dominant feature of the work of Thomas, Noel Ivanoff, Sequeira and Deleget.

Thomas has two panels side by side showing a coloured photograph of an old shed at night. It is hidden in shadows cast by a full moon in a wispy sky, and an adjacent street light, but one panel has the photograph complete and the other is largely blocked out by a strident rectangle of saturated yellow. The intense colour teases you in imagining what is hidden underneath and so you look at the work next to it for details you can hold in your memory.

Thomas’ other work is like a curtain rail vertically descending down a projecting corner, with a red strip one side and slightly lower yellow one on the other. Viewer movement and memory are crucial for visitors to be able to compare chromatic alignments of the narrow planes in this extremely skinny but elegant painting - with its right-angled cross-section that prevents you from seeing it all at once.

Noel Ivanoff exploits the imagination more than memory because his high key paintings allude to the logistics of how they got to the gallery. Their transport and packing is presented for consideration as much as their gorgeously coloured rectangles. In showing paintings attached to fake plywood and polystyrene boxing he is raising questions of how authentic crates in the ‘real world’ might differ.

The projected DVD by David Sequeira shows two identical twins (or perhaps the artist in duplicate?) shaking hands while wearing superimposed monochromatic coloured shirts. The flickering optical bombardment of saturated colour is drolly amusing as an unstable foil to the enactment of a legal agreement, and this affability is a beautiful contrast to the violence of Matthew Deleget’s six panels positioned nearby.They are painted fluorescent yellow, and three have had their centres smashed out with a hammer.

Deleget’s action implies an antagonism to monochromes, if not a hostility to art in general, or perhaps the paint application of his own examples? He might be providing a gesture that is calculatedly open to any kind of interpretation, or he may simply be enraged by any implication of transcendental symbolism, or the hue yellow itself. Like Sequeira’s DVD the work palls quickly. It seems to be a shallow gag.

The second property is Light. That is showcased as a quality to reveal transparency or misty atmosphere in the works of Bandau, Morris, Dahlhausen, and Benson. Often combined with articulated chronological structures these works use diluted paint, glass strips or the chemicals of photographic paper to present underlying watercolour paper or a gallery wall that is illuminated (despite its being covered by layers) or sometimes reflected in angularly set, round mirrors. Probably the most intense and colourful light is provided by blue vinyl slivers inserted by Christoph Dahlhausen into the large window by the front door, while the most delicate yet hypnotic radiation comes from the large, ten stage, yellow ochre wall drawing by Simon Morris.

TIME, the last aspect of the title, is also intensely examined by Kosloff and Mackrell. Laresa Kosloff’s film presents a figure dancing around a studio wearing different large, distorted, coloured cubes from which her legs and an arm extend. The jigging clowning movement emphasises time through its spontaneity, introducing a narrative component and a clear sequence of ‘performances’.

William Mackrell’s sculpture consists of a long paper cone channelling light thrown down it from a projector suspended from the ceiling - so that it condenses into a bright spot on the floor near the tip. Whilst it clearly refers to light entering the human iris, it also comical in its ungainliness, stressing the time for light to travel down the cone’s length and the various postulated laws of physics that over the years have endeavoured to explain optical phenomena. Surprisingly there is lot of humour in this show but this work is an example of levity that resonates - that somehow goes beyond a quick giggle to seem enigmatic yet profound.

This is one of those unusual dealer gallery international group shows that is curated on a theme, like what Andrew Jensen did recently with Naked. It uses a large space to look at a topic with aspects not normally juxtaposed, and achieves an intellectually fecund presentation rarely seen in the local institutions. Too good to miss.

Matthew,could you tell us what you mean by 'the aesthetics of combat' and the significance of that particular yellow you've ...

Dear John, My name is Matthew Deleget and I'm an artist based in Brooklyn, New York, USA. I'm one of ...

Readers might be interested to know that the Matthew Deleget work 'Known and Unknown Knowns and Unknowns' refers in its ...

Readers might be interested to know that the Matthew Deleget work 'Known and Unknown Knowns and Unknowns' refers in its title to a speech by Donald Rumsfeld.
<http://en.wikipedia.org/wiki/Unknown_unknown>

My name is Matthew Deleget and I'm an artist based in Brooklyn, New York, USA. I'm one of the artists currently participating in Colour Light Time at Two Rooms. Curator/artist David Thomas forwarded me your review today and I'm emailing to thank you for taking the time to see and write about our exhibition. Your review was thorough and thoughtful. I feel David put together an excellent exhibition exploring the divergent tendencies of new monochrome painting. Monochrome painting today is not monolithic by any means.

I am also quite pleased with what you wrote about my work in the show, of course minus the "palls" and "shallow gag" statements. My work was obviously conceived and created in a completely different place and context from where it is currently being exhibited. And I never know what, if anything, will get lost in translation from point A to B.

What might not be clear about my work is that it is directly engaged with the current political situation in the United States, but in a deliberately non-editorializing manner. Your "open to interpretation" statement is precisely accurate here.

For context, the title of my piece "Known and Unknown Knowns and Unknowns" is directly derived from a quote by the former US Secretary of Defense Donald Rumsfeld (under George Bush). Rumsfeld was the architect of the two wars, in which we are still (!) currently engaged in Iraq and Afghanistan. The fluorescent yellow color I used is excerpted directly from the aesthetics of combat and the American military complex (munitions, etc.). And lastly, my work is intended to both pay homage to and subvert my monochrome precedents.

Matthew,could you tell us what you mean by 'the aesthetics of combat' and the significance of that particular yellow you've used? Where exactly would you come across it for example?