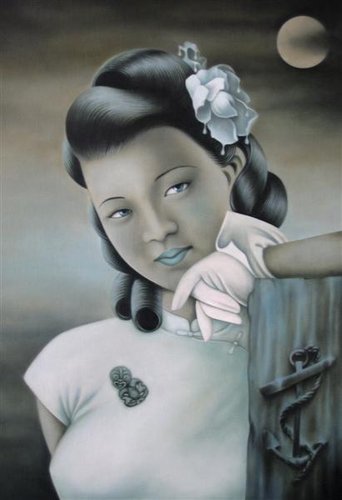 Something happens in the translating that affects the messages it sends out from those facial mechanisms that John Ward Knox in a recent NZ Herald interview has called ‘soul descriptors'. Old nuances get replaced by new ones. Often peculiar signals, sometimes foreboding, alarm or menace, start to appear. The affable radiance starts to fade and we might detect the beginning of a glower, the murmur of a sneer.

This intriguing little soft-cover publication is designed to go with the recent Straka exhibition in Dunedin. Its pages are a light card that makes the catalogue’s weight feels good in the hand, and many of the illustrations are close to identical, but not - being rendered images of one painting. Surprisingly they are copies of Straka’s work made by other artists working in a small Chinese town, Dafen, famous for its hand-painted copying industry. The replicas it produces, you have to look closely at to get their individuality. In fact there are 10 of the 50 in the show presented in this catalogue, all of a young ‘Shanghei girl’, incongruously perhaps wearing a tiki, looking sophisticated and appearing outward and friendly as if she is about to try to sell you something.

Each face has its own slightly unique flickering expression, a nuanced variation that with its mouth and eyes conveys that special little psychological something a little different from its neighbours. Included within the original gallery display amongst the 51 paintings was the original - a work Straka had appropriated from her own history, based on an earlier painting copied initially in 2007 from a cosmetic poster.

Notman’s interview with Straka discussing her experiences in China, and Kreisler’s essay about the permutations of her painting practice, make fascinating reading. Kreisler carefully explains the nature of the overlapping original and copies so that they become conceptually difficult to pry apart, soon becoming ‘original’ and ‘copies’, the terms thus being treated with suspicion - especially when the proud copyists have signed their labours with pictographs and Straka has added a fake Chinese identity of her own.

Kreisler’s text draws out the irony of depicted Chinese models wearing tikis, selling the culture of Aotearoa to Chinese, Chinese New Zealanders and non-Chinese New Zealanders alike, when you consider the history of Sinophobic racism in this country. And that shameful past is set out as a contextual backdrop in his essay and in the book’s endpapers and back cover.

The project though is also about eroticism, accidental as much as calculated, and what happens when artists try to replicate the fine features of a graphically simplified (through drawing on paper or make up in person) human face. Something happens in the translating that affects the messages it sends out from those facial mechanisms that John Ward Knox in a recent NZ Herald interview has called ‘soul descriptors’. Old nuances get replaced by new ones. Often peculiar signals, sometimes foreboding, alarm or menace, start to appear. The affable radiance starts to fade and we might detect the beginning of a glower, the murmur of a sneer.

Also with 51 near identical visages of the same person, we have here a project located somewhere between the screened coke bottles of Andy Warhol and the photographs of Roni Horn. With these reproductions an aura is retained because they are inventions (albeit unintended by the copyists) as much as attempted blind copies. And of course, in terms of political content, these works are about difference and racist generalisations about one ethnic group all looking the same. The avoidance of an I-Thou relationship (in Martin Buber’s terms). The sticking to an I-Thing mentality.

I like this little book enormously and would like to see the show close hand to see how the different individual versions affect you in terms of mood. Going through the lot one by one and thinking to yourself what is this face saying compared to its companions? What vibes is it sending I can think about?