Sliding Between Microcosm and Macrocosm 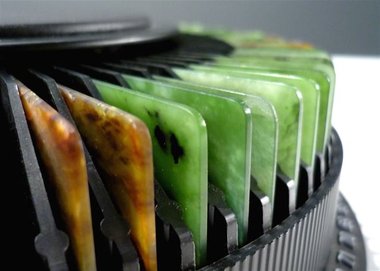 Yet the final experience here is so indisputably evocative, and unusual, transporting the viewer far away from the world of minerals and geological processes, that each visitor tends to experience it viscerally and instinctively, like that of privately watching a full moon on a cloudy night.

The genre of using a slide carousel for the purposes of an art installation is a rare and intriguing phenomenon, an art-historical genre in its own right. The best example I’ve seen is the site-specific work of John Dunkley-Smith (part of Paul Taylor’s 1983 Tall Poppies show held in the University of Melbourne’s art gallery), where the sequences of slides referred to the collection of aboriginal art displayed in same room but hidden in darkness. Another favourite is Fritz Balthaus’ work in QUOBO, the show of contemporary art from Berlin shown in Waikato Museum about five years ago. It wasn’t so much a carousel that got your attention but the automatic focus into which was placed a slide containing bubble wrap. The machine continually attempted to adjust to the two simultaneous focal points of the plastic bubbles, never stabilising or staying in one or the other - and so seemed in a constant state of exasperation.

Joe Sheehan is well known as a virtuoso carver of marble or jade, and famous for making things like solid greywacke versions of crunched up plastic milk containers washed up on the beach. Slide show is a conceptual project of sorts in that its replaces slides with sequences of slide-sized pieces of pounamu (greenstone), a jade found only in the South island and attributed by Maori with spiritual properties. Now and then other less precious rock types are used as well.

The geological slides are cut thin so the carousel can hold about eighty of them. Sheehan also drills in with a wide bit to make domelike indentations that are wafer thin. The veiny, watery-looking rock, also containing angular black specks and misty amber clouds, often looks like streaky or crumpled tissue paper - or even vigourous and moody watercolour studies of sky forms.

It is very strange to see a substance like rock, normally equated with solid mass, ‘dematerialised’ so that properties such as liquidity and transparency are emphasised. Sheehan’s problem is to make this go beyond facile gimmickry, so it has gravitas - although it might be argued that such effects of light-transmuted rock are more than enough for a memorable ‘art’ experience.

Sheehan has chosen to avoid digital PowerPoint technology, and so the Luddite carousel he relies on is noisy in its operation within the darkened Melville space. You never forget this clattering projector - and that fact is obviously calculated. The artist doesn’t want you too transported by optical sensation alone.

Perhaps with these thoughts in mind, he has devised three sorts of carousel program. One is the ‘plain’ variety described above. Another is with areas of the rock slide masked off with paint or tape so that triangular slivers of light peek through edges dramatically, like light under a shut door. The third is with slides that have maplike coastal contours, filled with black ink, engraved into the rock. The contours come from North Auckland islands and beaches.

I confess I’m not really sure about this installation, and the last two carousels particularly seem over-contrived. I’m greatly impressed by the inventive use of rock as a transparent medium for light to pass through to create richly layered associations with botany, astronomy and art history, but the use of drawing to refer to exploration, and the creation of a cavelike environs to achieve a theatrical ‘mysticism’, makes me a little wary. I tend to be cynical of all notions ‘spiritual’ so my temperament is not sympathetic to this sort of presentation - while I’m also hostile to science museum-type displays (showcasing information) in galleries too.

Yet the final experience here is so indisputably evocative, and unusual, transporting the viewer far away from the world of minerals and geological processes, that each visitor tends to experience it viscerally and instinctively, like that of privately watching a full moon on a cloudy night. It is sufficiently enjoyable on that level.