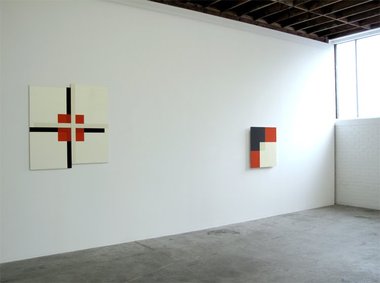 The affect from this taut interlocking tension is remarkable.

The painting is at the wall

Most Auckland gallery goers probably won’t be particularly surprised if I tell them that right now on the walls of the large downstairs space at Jensen, under natural light, are seven carefully positioned Bambury paintings, and while three others of paint and wax on stone tiles are also present in a flat vitrine, the seven panelled works make up an unusually absorbing installation. Jensen Gallery often has spare, somewhat austere, elegant hangs.

However it is not just the exactitude of their positioning within the architecture, and the way these works fit around the various wall lengths, staircases and adjacent corridors that is noteworthy. The paintings are of three compositional types: some have centrally located holes or accentuated corners made from when two diagonally opposite rectangles overlap on a single panel; others have thin, ‘sliding’ crosses placed over an accentuated middle on double panels; one other has a dominantly dark rusty half-panel – made from micaceous iron oxide and with cross lines of iron filings.

So standing in the centre of the very large space, and looking at the sequence in clockwise order, the types go: corner, middle, half, middle, corner, middle, corner. It’s a stuttering but persistent, irregular pulse. Made from elements that really vary - especially in the weight and positioning of the corners, or the positioning of the intersecting cross lines - despite their being classifiable into generic types.

Bambury has been making diptyches with spindly double crosses for many years now, and some of them don’t do much in terms of dynamic. However in this show, on the wall closest to the entrance door, the work called SC099151 is quite extraordinary. It generates its excitement through its two creamy panels not having flushed edges at the top and bottom but being raised higher on the right. For despite these incongruous jumps where they butt together, the central red square and its two crosses (the underlaid solid version and its negative overlaid ‘shadow’) remain perfectly in sync. The affect from this taut interlocking tension is remarkable.

Upstairs he attempts another sort of installation using a long burnt sienna brick wall and a line of six butted pairs of painted stretchers, aligned at diagonal angles. Within each pair, the top stretcher is slightly wider than the one below, the lopsided counterweight flicking a hint of centrifugal spin into the composition. The joined pairs alternate between same colours or contrasting ones - using red, white, and black – and are grouped in three sets of two, aligned to top left, top right and then top left again. Like this.

My feeling that is the angle of alignment is too steep to fully integrate the six doubles, and that the two angles of alignment might work better if they were closer to the vertical.

The downstairs installation is worth spending some serious time with. Of the three types, the paintings with holes, overlapping rectangles and pronounced corners aren’t as successful individually as the others, though their odd lack of balance and avoidance of delicate form or line makes them adventurous planar experiments. Worth visiting for SC099151 alone.