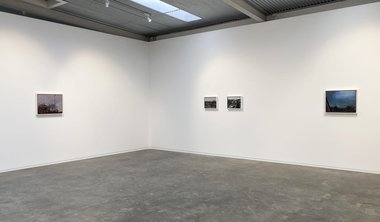 In the blue works, McMillan's pronounced blurs, runny streaks and drops accentuate the sense of one's body being speedily located amongst immersive hostile elements. Bodily though, the grey works have more impact as manipulators of illusory deep space. The blue paintings instead emphasise the gallery environs, providing blue ‘screens' instead of ‘windows.'

Gary McMillan is gradually getting known for his clever ‘pointillist’ paintings of vistas seen via the windows of a moving car. They intrigue because of their incorporation of the windscreen or side-window as a reflexive comment on the canvas surface, the use of blurs for passed and passing objects, and ambiguities about the window itself: is it being looked through (and out) from the inside, or being looked at (with attendant surface-accentuating reflections or drops of rain) from the outside; a sort of mirror that you can’t see through? In most of these Seurat-influenced works (exploiting shimmering fields of tiny dots) blue is the dominant colour. They are the recent works, made this year.

However there are also two other paintings from 2008 that are a pale browny-grey and not reliant on diminutive brush-tips. These are stylistically connected to seventies photo-realist painters like Richard Estes or more recently, James White. They have high horizon-lines and are mid-tone scenes of curved motorways and overpasses, featuring simplified chromatically nuanced forms aligned in deep perspective. Although the ghostly faint reflections on the window glass are important, a more salient aspect is that you are peering through them and out. With these warm grey works you are immediately struck by the elegance of the sweeping curved cantilevered shapes, the delicious pervading geometry of the angled rooftops, the pulling depth, and the watery gestural streaks in the advancing rain clouds.

The blue works in comparison have a lower horizon, show more sky, and include organic forms like bushy trees. The painting process is emphasised (proclaimed, even) and never hidden, be that the use of photographs or the obsessively repetitive painted dot application. Yet meteorological content (and the observation of light) is dominant, as is the technology of vehicular travel and acceleration. McMillan’s pronounced blurs, runny streaks and drops accentuate the sense of one’s body being speedily located amongst immersive hostile elements.

Bodily though, the grey works have more impact as manipulators of illusory space, for the blue paintings emphasise instead the gallery environs and the verticality of the walls, providing blue ‘screens’ instead of ‘windows.’ The show’s eight paintings are hung with finesse—structured as a kind of horizontal chromatic (clockwise) loop—starting with pinky grey-brown, brownish grey, grey blue, intense blue, and finally brown-grey blue. It works well. 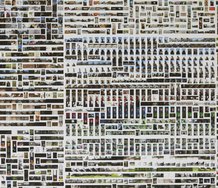