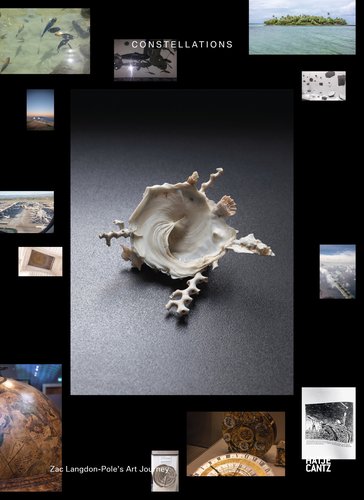 This beautifully designed publication is cleverly engineered to impart complicated information with maximum efficiency. It is divided into fifteen sections that include four blocks of differently sized illustrations of artworks or images (to suggest the dimensions of space and time), two interviews, two superb essays, assorted maps and timelines, and separate annotated indexes for both artworks and discovered images—the later often in a group termed 'Constellations.'

Berlin-based New Zealand artist, Zac Langdon-Pole‘s salient characteristic is to make visually mesmerising sculptures or images that tap into much wider complex multi-layered ideas. They have an intimacy that excite you to come close and ponder his hybrid forms and extraordinary choice of materials, and then take a big mental step back to explore the contextual referents such as the ones he also provides through this wonderful book: bodies of research to do with migration and navigation that he investigated during a twenty-three stop world trip (across Western Europe and the Pacific Islands) funded by BMW, that he was awarded.

This beautifully designed publication is cleverly engineered to impart complicated information with maximum efficiency. Significantly though many of the writers are academics, their texts are never turgid and always rich and exciting. The book is divided into fifteen sections that include four blocks of differently sized illustrations of artworks or images (to suggest the dimensions of space and time), two interviews, two superb essays, assorted maps and timelines, and separate annotated indexes for both artworks and discovered images—the later often in a group termed Constellations. The organisation and sequencing is very unusual.

As for the nature of these Constellations, in Langdon-Pole’s constantly researching—ever curious—poetic collagist hands, they can be part of a vast range of possibilities: configurations in the starry sky; blue wallpaper featuring pairs of snipped-off bird legs; gold-filled borer holes in a wooden cabinet; the catacomb burial tunnels of Paris; positions of moving carp in a shoal in a shallow pond; scattered site-specific granules of sand in multiple photograms; a shower of meteorites; spiralling sea shells, curlicued octopus membrane or scrolls of pandanus leaves; exposed components within flayed facial anatomy models—or a collection of meaningful objects/images that (though separated in space and time) together through cross-connections function like interpretable co-ordinates to render another significant form. Many of the images are recirculated and rejuxtaposed on other pages in a smaller thumbnail format.

Langdon-Pole’s conversations with András Szanto are fascinating reading, as are the commentaries from Marc Spiegler and Thomas Girst, but the most intriguing discussion (often mythological, zoological, navigational or anthropological) comes from the carefully structured essays of Christina Barton and Tendai John Mutambu which help set out the overlapping and partially entangled nets of (initially) disparate references that almost appear to exclude nothing. Configurations embedded in human and avian migration parallel myriad other formations that double as lopsided matrixes, resurfacing as avariciously inclusive semantic grids.

Plus there are a few baffling images that remain so; varieties of viewable object he does not attempt to present explications for. Often subjectively private reasons (and perhaps not even these) ensure he is not obliged to explain. He doesn’t shun mystery. Nor, by-the-way, heartfelt emotion.

Anybody who has ever visited Berlin will understand exactly why Langdon-Pole lives and studies there: it is a city bursting with all sorts of museums and other fabulous cultural resources. A great base for venturing beyond to research.

Langdon-Pole was very lucky to have made these global trips just before the pandemic erupted to thwart air travel and face-to-face conversation. Fortunately this lovely book—so loaded with evocative juxtapositions—is now out. It presents a lot of information about works that usually are visually compelling on their own. Understanding their conceptual exegesis is not essential for extracting pleasurable interest—but an optional and valuable bonus.