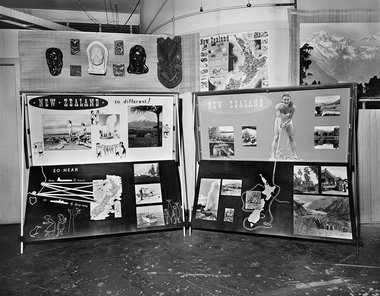 With the artist's discovery in Wellington of the copious NPS documentation—and their selected presentation here—we can analyse the display headings on the placards that guided their readers (as potential customers or retailers). They were designed to be eyecatching: NZ building a nation; NZ so different; NZ so near; NZ a world in itself; NZ is growing; This is NZ; Wonderful NZ; NZ glorious in the Autumn.

Old Government House (in the University of Auckland)

Seen initially as part of Robert Leonard and Aaron Lister’s sprawling City Gallery (Wellington) 2018 survey This is New Zealand, Emil McAvoy‘s historical study of the mechanisms of forties to sixties government publicity looks at ‘propaganda’—place-oriented conceptual structures—and how community identity is constructed. In Auckland, it is presented knowingly in Old Government House. In what is now the University staff common room.

The National Basement, McAvoy‘s 17 documentary photographs of tourism, farming / industry / trade sector promotional displays have been pulled out of the 250,000 images stored in the National Publicity Studios archives, and then digitally restored. Originally made to demonstrate usage, these shots of stands holding up publicity images of mountains and lakes, fly-fishing, shearing, whares, geothermal power and marlin fishing etc. (normally never made public) expose the processes of image and text presentation. McAvoy is interested in the cropping, and juxtaposition with language; how they were packaged; how they were treated to reach a wider audience.

Usually today these old archival shots look tacky or clunky—inadvertently amusing and naive in fact—especially in the way the photographs were originally shown in trade fairs or government foyers, often propped up on spindly metal stands with curling decorative scrolls at the sides and plastic balls for feet, or presented as multiple panels lined up in a grid, hanging off tabs nailed to a large wall.

This show however is only partially about presentational fashion or the vagaries of history. It is more a succinct way of encouraging us to think about the government agencies of the present as well as the past—and the ‘mythologies’ (to use Barthes’ famous term) they implement through the proliferation of images: how we evaluate them. Can we ever be confident that they accurately reflect the activities and mores of this country, especially as New Zealand Aotearoa contains many diverse communities?

With the artist‘s discovery in Wellington of the copious NPS documentation—and its selected presentation here—we can analyse the display headings on the placards that guided their readers (as potential customers or retailers). They were designed to be eyecatching: NZ building a nation; NZ so different; NZ so near; NZ a world in itself; NZ is growing; This is NZ; Wonderful NZ; NZ glorious in the Autumn.

Heady idealism and an ostrichlike wilful ignorance (if not quaint naivety) dominate. On seeing these very dated images today, with other once hidden subjects such as national pollution, racism, poverty, crime and child abuse now being much discussed, many viewers are likely to response with laughter or shock. We have to remind ourselves most of these photos are close to eighty years old.

To be historically succinct, ‘New Zealand’ (referencing Northern Atlantic cultures) is now fading fast while ‘Aotearoa’ (embedded in the South Pacific) grows in confidence and strength. It may be fanciful to imagine, but perhaps in another eighty years some currently unborn university academic will analyse today’s batch of assumed ‘truthful’ images—positioned from a third (notional) national entity we cannot even envisage yet?