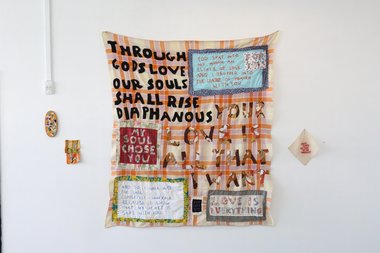 In 'Blankets for Angels 3', not only text proliferates but also the presence of embroidered hearts and flowers among the declarations of eternal love. Nothing cynical. In fact, the very opposite. It is like Fourie has deliberately gone overboard to mimic Emin's profligate rage but with a blatant positive spin.

In 1995 British art star Tracey Emin created a self-confessional and confrontational work, called Everyone I ever Slept With, 1963 - 1995. By her calculations the count came to a 102 (including family members who actually—and only—slept). She remembered all their names because they were embroidered onto the interior of a well-lit pup tent. It wouldn’t have past notice that it wasn’t just the subject of the work that was arresting, but also the medium used. This was a textile work that consciously employed the skills, medium and techniques associated with a long craft tradition almost exclusively the domain of women.

Emin was not only raising an awareness about sexual/gender politics in her piece-and slyly laughing at how sex can be sensationalised—but also showcasing art politics and the reclamation of ‘feminine’ crafts like knitting and embroidery.

That revolution continues and is celebrated today in the work of two New Zealand artists who showed recently at Never Project Space in Hamilton: Alice Alva and Wesley John Fourie.

The Tracey Emin influence is particularly evident in the large works of Fourie, not only in the medium utilised, the use of text, the configuration of materials, but also in relation to the subject matter. However, the angry, aggrieved and painful tone of Emin is replaced here by something strikingly more upbeat, ebullient, and darn right ecstatic when it comes to the question of emotional relationships. Fourie is in love, and there is no holding the artist back.

Blankets for Angels 2, a work with mixed fibres on wool blanket, shouts the message from the rooftops. Even God is called upon in this outpouring of sentiment, while Biblical connotations erupt everywhere in the text. Love is a form of Resurrection; it is souls coming together; it is unafraid to walk through the Valley of the Shadow; it is a kind of visceral miracle healing; echoing something from the New Testament. It is, in other words, Heaven itself.

While never is heard a discouraging word, certainly not something like, “At the age of 13 why the hell should I trust anyone. No fucking way“, (a detail from part of a work presented by Emin for the Turner Prize), Fourie consciously adopts her format—the bold lettering in different colours, the various window configurations to frame various texts, and the size of the works themselves.

The same applies for Blankets for Angels 3, where not only text proliferates, but also the presence of embroidered hearts and flowers among the declarations of eternal love. Nothing cynical. In fact, the very opposite. It is like the artist has deliberately gone overboard to mimic Emin’s profligate rage but with a blatant positive spin.

Where it gets a little more grunty is in a much smaller work, a delicate silk embroidery creation entitled Fuck me in the forest. Apart from the text, this tondo piece is completely abstract, and its subtle mix of greens and light blues suggest a bucolic Garden of Eden scene, a perfect setting for the act of rumpy pumpy.

And just to prove the artist doesn’t need text at all, Fourie produces a large, bold and audacious work, Forest Floor (Where we lay together in love), a silk cotton and wool on cotton production that unfurls down the gallery wall and along the floor. This piece de résistance, a long cotton drop of material, contains exquisite sewn images of flora—leaves, flowers, mushrooms, of multiple varieties, scattered across the ‘canvas’ like some kind of heraldic wall-hanging/carpet. A lover’s fairy tale dream come true.

The second artist in the show, Alice Alva, by contrast, works on a much smaller scale, miniature, when it comes to a textile piece like I’m running towards nothing. This cotton on linen sample, with Rewarewa frame, is a gem of a work. It succeeds in part because of the frame constriction, lending the simple floral piece power, focus and intensity.

Her Threads loose and Wildling demonstrate her capacity to change gear and become playfully abstract, using curvilinear microbial forms sewn on samples of hospital blankets in the case of Threads. A nod perhaps to our present pandemic conundrum. These dancing, free flowing compositions have a vibrancy and energy packed into a small space. Threads loose has an extra dynamic in that undulating forms are played off against the geometric pattern on the blanket, lending a nice frisson to the work.

Gimme! Gimme! Gimme! (A man after midnight), and Hung Up (I’m so hung up on you) take us back to the burning ardour and fervent passion expressed by Fourie. Say it with flowers is exemplified here with the use of found curtain material emblazoned with images of bright, bold floral blooms resembling a 1950’s aesthetic. The title, Gimme, straight out of ABBA with its jaunty upbeat Pop rhythms accompanying a forlorn pleading narrative, is camped up in the tondo work here with sequins, found plastic, glass and wood beads. Whether this is sufficient to “take me through the darkness”, is debatable, but one is reminded of those birds who decorate their nests with shiny acquired objects in order to attract a mate.

A similar pleading complaint is heard in Madonna’s song, Hung Up, which Alva directly alludes to in her work of the same name. Lovelorn and lonely (“Waiting for your call / Baby night and day“) gets identical treatment with marigolds surrounded by the same cheap tat.

We seem to oscillate in this show between heart on the wide sleeve sincerity and ironic playful self-mockery. In these confusing times, all innocence gone, it is difficult to know whether to play hardball or soft centre bonbon sweet. Fourie and Alva do both, and sometimes both at the same time. Gender politics (Fourie identifies as “they”), and art and sexual politics, continue adroitly here where Emin left off. 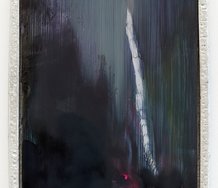 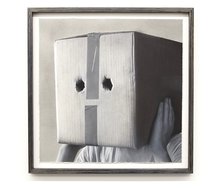