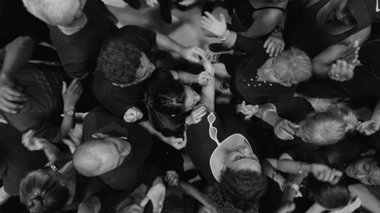 Maybe a religious interpretation is an old fashioned approach. I like the idea of 'Geometria Popular' being interpreted within a contemporary context, having vivid currency right now. Its positivity might be aligned to the Democratic Party recently picking Kamala Harris as a Vice Presidential candidate. A new meaning perhaps; a geometric sequence that gives the planet hope.

This is the third Te Tuhi online video exhibition, and obviously its timing is perfect for the current Auckland Level 3 Lockdown. It features a work by Cuban artist Dagoberto Rodriguez, who was a member of the Los Carpinteros collective until it disbanded a couple of years ago. They presented a large drawing (a study for a sculpture) at Trish Clark‘s about three years ago.

The five minute black and white video starts off with an unruly crowd scene, a square of about a hundred jostling shouting bad-tempered ruffians aggressively taunting their neighbours. Gradually within this morass of gesticulating bodies a diagonal pathway appears between the two halves that starts to widen. Beginning at ground level with vociferous yelling faces, the camera slowly rises to an aerial perspective so that the structure of the changing floorplan is formally made clear.

Two women appear who calm the incendiary mob down and shepherd the moving figures into two opposing triangles. and these in turn are reunited to transmute into an ordered empty circle three people thick. Like a moving tyre the wheel-rim turns in a clockwise direction.

Rodriguez’s project seems to be more than a choreographed exercise in crowd control, but a plea for unity in sorting out the planet’s social, ecological, economic and pandemic problems. The quietly turning circle is a pronounced contrast to the initial square of seething raucous humanity, a symbol of optimism and desire for constructive resolution.

As Salgado points out, the circle is an archetypal Jungian symbol that can also mean the doctrine of Samsara (essential to Hinduism, Buddhism, Jainism, and Sikhism), an endless turning cycle of metempsychosis (reincarnation) and continual rebirthing over thousands and thousands of years.

Maybe that religious fixation is an old fashioned approach? I like the idea of Geometria Popular being interpreted within a contemporary context, having vivid currency right now. For example, its positivity might be aligned to the Democratic Party recently picking Kamala Harris as a Vice Presidential candidate. A new meaning perhaps; a geometric sequence that gives the planet hope.

This reading is propelled by the restlessness and confrontation of the early crowd scenes, something that correlates with the fragmented polarisation of today’s zeitgeist—the lack of calm discussion; the avoidance of any willingness to compromise.

Having two Cuban women organise the two factions is an intriguing statement too, authoritative women who separate the populace like the Biblical Red Sea, and who then recoalesce them in an orderly fashion. Are men not capable of such insight or willpower?

The implication in this elegant project is they are not. For all the discussion that such postulation entails, the suggestion here is that such a revolution is imminent, and inevitable too.