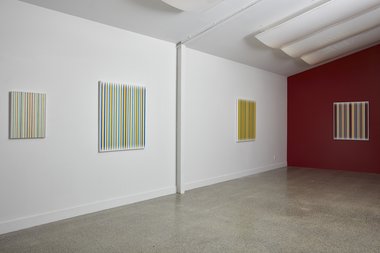 With the abstracted pointed leaves of the Harakeke paintings you wonder about them as tropes, for they are also rich in possibilities beyond that of representing a fibrous cultivar. Their functional shape could symbolise the picked-through options of consumerism (the choosing process), or sewing needles or piercing weapons, or community-protecting barricades.

Jon Tootill at Sanderson presents ten abstract paintings within two distinctive sets, both featuring coloured vertical stripes and symmetry. The larger and later one (Harakeke) has pointed tips aligned along the top and bottom ends of bands which represent a row of long harakeke leaves, while the smaller and earlier (Harakeke Iti) series is in the Bridget Riley, Gene Davis ‘optical’ tradition of the seventies. It uses rhythm and repetition, the clustered parallel stripes finishing at the horizontal stretcher edges.

With titles that clearly reference Māori flax weaving (raranga harakeke), we see a curious amalgam (imagewise) of national (Aotearoa) blended with international-historical (UK and USA). Their size makes them domestic and intimate, even though you could argue they historically reference the corporate, a genre of painting normally much larger.

Tootill’s Harakeke images have interesting figurative overtones when their bands show sharpened points. Besides harakeke leaves, they also could be palisades, toothpicks or pickup sticks (alluding to Parekowhai), and are far less regularly spaced than the Harakeke iti series—less predictable; more complex. Sometimes there are different thicknesses of white vertical linear negative spaces, and sometimes coloured bands are butted together with no separation, no enclosing—or dividing—white lines.

Even though earlier Tootill paintings reference basket weaving more overtly, these clusters of shimmering columns still do that—albeit not so literally with a tilted orthodox grid. Instead interspersed vertical elements are irregularly spaced, but mirrored along a horizontal axis. The scattered spread doesn’t abandon order (it is still present) and although the earlier works (from 2018) which use diagonal grids allude (in the painting tradition) to some Gordon Walters works, the quivering tips of these paintings have more pronounced similarities to related tactile elements developed by Richard Killeen and (later) Kathy Barry.

The four Harakeke Iti works—with their parallel bands—have visual cultural connections (from a distance) to deck chairs, awnings, Dashper, Buren and Noland. Not nearly as bodily as say Riley, they nevertheless pulse. They don’t have as perfect a finish as the larger more pristine Harakeke canvases, the thin paint being slightly blotchier and the line edges a little wobbly. Some will find those qualities a plus, such traces of manuality giving the work a vaguely folk art quality.

One unusual Harakeke work (no number) sits between the two series, having the ‘spears’ with points at only one end—and alternating top to bottom as your eye traverses across each painting’s width.

In his choice of palette Tootill tends to favour warm earth and plant colours that radiate an organic ambience to reference cultivars flourishing in a dry ochrey landscape. The mandala-like symmetry gives these abstractions an iconic quality, a contemplative ‘aura’ that draws you into the centre—to then pull out—so you can ponder the enclosing (balancing) triads of differently toned or thickened line, and various densities of white background in some, and the different angles of tremulous tip at certain points on the horizontal edges in others.

With the abstracted pointed leaves of the Harakeke paintings you wonder about them as tropes, for as indicated they are also rich in possibilities beyond that of representing a fibrous cultivar. Their functional shape could symbolise the picked-through options of consumerism (the choosing process), or sewing needles or piercing weapons, or community-protecting barricades.

One might also wonder if they might espouse a footnoted narrative that embraces the dominant decorative and musical effects of the stripes, as say a guitar pick might. Or have a purpose that is entirely optical and to do with the edge of the stretcher—created to diffuse the line ends via the encroaching white background field? Perhaps also revelling in the ‘prickling’ of the eye with the two ‘serrated’ borders that create a sawtooth sensation—emptying out the centre and fixating on their outer dramatically jagged shapes—a vibrating texture that brings a distinctive ‘timbre’ to the chordal clusters.