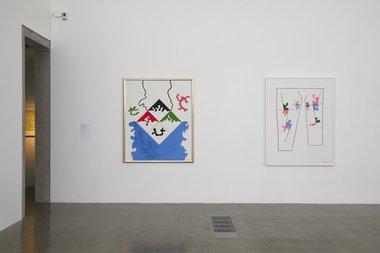 Schoon's white field works, though clumsy and lacking in approach the agonised-over finessed compositional finish of Walters, appeal by virtue of their rebus or puzzle-like quality, an aspect of Hattaway that Walters also developed with his en abyme and other works. They look at metamorphosis while being precursors of the processual paintings of an artist like Tomma Abts—though not about paint layering.

Organised around the four levels of the Te Uru building—and interspersed with a couple of other small shows—this iteration of the City Gallery Wellington exhibition gives us the chance to look at Theo Schoon‘s ideas and achievements via exhibits and contextualising wall labels.

It is pointedly not a Theo Schoon survey—nothing like say the Gordon Walters New Vision show of last year—though it is partially. It is more ambitious. Schoon’s artworks (though central) are mixed with those of a wide range of friends, colleagues and associates (some providing TS portraits), and at times are hard to distinguish.

Although like Picasso and Braque as innovative researchers (their names being often linked) Schoon’s interests and experiments were much wider ranging than Walters (who focussed solely on modernist painting apart from the occasional workshopped print) and less preoccupied with perfect finish. Schoon’s observations, speculative ideas and passions tended to be sprawling, traversing many geographic, cultural and disciplinary boundaries, while his innovative uses of different media formally and conceptually fed each other. A powerful catalyst who initiated and nurtured new ways of expanding the notion of ‘art practice’, he was a mentor for many, paradoxically (now) an enthusiastic dancer (in the Balinese genre) who was never filmed.

Although I would have preferred to see Schoon’s works in isolation, grouped together (even if some are a little battered) without company, it is easy to see what the curators are attempting to achieve with this multi-artist, multi media show—which (with its stress on interconnected social links) I think inevitably exasperates through overload. Yet both curators are superb communicators, and Skinner‘s Schoon biography a magnificent attempt to understand this highly complex, many facetted (at times fractious and disdainful) individual who had so many (in his time, unusual) enthusiasms. Plus Skinner and Lister have worked well together to construct the excellent online City Gallery publication, with the help of fellow contributors Nathan Pohio and Andrew Paul Wood.

For me the Rotorua mud pool photographs, the gourds, and some of his prints are Schoon’s greatest artistic achievement. (Others might prefer the jade carvings or ceramics.) However, I am also greatly fascinated by many of his paintings, especially those presenting undulating jigsaw-shaped motifs made with coloured lines on white fields (and not the more well known kowhaiwhai-based works). They seem to have been made intuitively and quickly, as if in a sort of trance, and were initially inspired by Rolfe Hattaway’s drawings, Schoon’s drawn versions of which also inspired Walters (but in a different direction). To perhaps grossly over simplify, Schoon was here obsessed with line, Walters with shape.

How do we interpret these strange ‘minimal’ works, that seem to vaguely suggest ‘painting by numbers’—but thwarting a mental ‘filling in’, with wobbly organic contours that change hue on opposing sides—and which (although Schoon is usually known for his admiration for Māori and Indonesian forms) seem vaguely influenced by the linear ‘anthropomorphism’ of French artists like Gaston Chaissac and Jean Dubuffet? Do they allude to rock forms or genitals—or standing figures line-dancing? Or amoebae or fingerlike Matissean oak leaves; perhaps board games—presenting parts of maps, with rivers maybe, or little peninsulas and connecting isthmuses?

And what of those stiff straight lines making up weird geometric configurations? Sometimes they refer to using a camera and male trousers (1). Other times it’s vaguer: the empty black linear forms providing armatures around which the squiggles with chroma linger.

Strangely, although I think these peculiar paintings are ultimately unresolved—Schoon being far less mono-focussed than Walters; not likely to gnaw at works over long periods like a dog on a bone—they still intrigue. They baffle in their awkwardness, while implying a structural logic hidden beneath the surface holding up the meandering marks. In a bizarre fanciful way they seem like a Salvador Dali version of Ian Scott’s Lattices, interwoven grids made of icing that have exploded and then melted to form puddles. Appearing to hover, they hint at a process of dismantling order.

Rolfe Hattaway’s skinny tremulous lines were obviously a great inspiration for Schoon (along with Māori rock art and linear European life drawing), but Schoon (by replacing a pencil with a brush, and extending his decoration of gourds) fattened the linear component, introducing a consciously organic quality and exploiting at times a cellular morphological repetition. (Hattaway (1907-1970) incidentally—with his ‘scripted’ pencil line—had a lot in common with the French art brut artist, Francis Palanc (1928-2015) whose descending line is more spiky, angular and less fluid.)

Schoon’s schematic white field works, though clumsy and lacking in approach the agonised-over, finessed, compositional finish of Walters, appeal by virtue of their rebus or puzzle-like quality, an aspect of Hattaway that Walters also developed with his en abyme and other works. They look at metamorphosis while being precursors of the processual paintings of an artist like Tomma Abts—though not about paint layering; more sequencing of shape.

This complex exhibition—with its especially witty title in Te Uru’s architectural context—has many points of access, and each visitor can (like me) zero in via their own pathway. Obviously I’ve developed here some investigative loci that I find fascinating and compelling (albeit a little strange): a few interests worthy of further discussion.

(1) As seen in the eponymous work. The same theme might also be seen in ‘Untitled’ 1965, which could represent a group of pornographic photographs of ejaculating penises, hanging up to dry in a darkroom. (See Skinner, p.73)