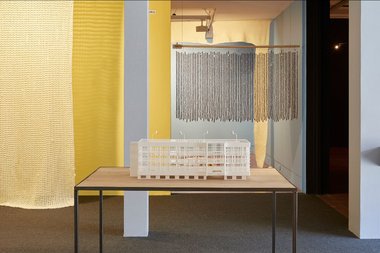 The context for Salgado's project is an awareness of Aotearoa's housing crisis (the urgent need for solving the problem of homelessness globally) blended with some contemporary Auckland comments on domestic home acquisition—plus an exuberant but brief look at the history of avant-garde experimentation. Maybe there is a look at the role of recreation (like sport or art) as well, and its role in the lives of the working, the unemployed and the retired.

For many decades now, modernist architecture has been under critique from within its ranks, testing the conceptual parameters of modernist architecture and its attendant social spaces-and noting its waste of resources and social sterility. In this fresh look, Gabriela Salgado brings together three Auckland artists and juxtaposes them with a playful film from the legendary seventies ‘anarchitect,’ Gordon Matta-Clark (1943-78)—famous for his carefully planned chainsaw ‘mutilations’ that exposed the ‘innards’ of about-to-be-demolished buildings in New York, Chicago and Paris.

The context for Salgado’s project is an awareness of Aotearoa’s housing crisis (the urgent need for solving the problem of homelessness globally) blended with some contemporary Auckland comments on domestic home acquisition—plus an exuberant but brief look at the history of avant-garde experimentation.  Maybe there is a look at the role of recreation (like sport or art) as well, and its role in the lives of the working, the unemployed and the retired.

Open House (1972) shows Matta-Clark holding a party with dancer and architect friends while constructing a narrow dwelling (Dumpster Duplex) inside a skip using scavenged building scraps found on Greene Street. The grainy and energetic film has a loose spontaneity as the small coterie of dancers, carpenters and other young friends goof around-leaping about, clowning, balancing on beams while twirling umbrellas—within the narrow corridors and doorways built inside the oblong roofless container. Matta-Clark and his pals pass the camera around, quickly organising carefully angled shots within the skip, and outside in the enclosing Bronx neighbourhood.

The resulting film has a big emphasis on the social and how collective energies can push a project through, as opposed to his other films like Splitting (1974) and Comical Intersect (1975) which emphasise the artist’s driving agency and its effect on the intervened space.

Yonel Watene opened his show in the Iris Fisher gallery with a ‘housewarming’ party, celebrating the building of a satirical house out of cardboard boxes (lined with newspaper)-as if it were his own home; a wharenui he will decorate with a large mural on the outside.

Watene has organised his space to include two videos—featuring appropriated music and artist interview material, and film from trips to Mexico, Germany and Poland-dividing the floor area up with the spatial layout that accompanies the pōwhiri ritual. He shows the hongi-based welcoming procedure with the pairing of different leaning-together beams—exploiting different types of timber that symbolically distinguish between the tangata whenua and manuhiri.

This artist has an aptitude for making interesting minimalist (and concept based) freestanding sculpture that often involves witty (self-mocking) wordplay—Wizard Staffs (unopened cans of beer that are painted black and made into vertical walking sticks), Hanging Out to Dry (strips of denim painted with oil paint and placed by a nervous painter on an A-Frame drying rack)—but not a flair for painting. The painting (scheduled to occur over a number of Saturdays) seems to be struggling in its execution. His talent lies elsewhere.

With Sosefina Andy’s installation in the Bev Smaill Gallery, an interpretation of her grandmother’s house in Samoa, I love the transformative pastel colours—painted on the walls and crocheted in netlike suspended woollen screens. The walls feature pale yellows and blues and intricate knotty textures that lift the viewer psychologically when they enter the intimate space. On the floor is a beautiful mat of over 300 fabric flowers, each quarter made up of vibrant concentric squares.

Inside there is a wonky linear chair (unusable and made of reinforcing rods designed for concrete) that is very funny, as is the thin crocheted woollen tree ascending to the ceiling—a reference to a tree similarly positioned in Samoa. This installation has a whimsical, exuberant quality quite different from the mathematical, calibration-oriented feel of her contribution to Iona Gordon-Smith’s Names Held in Our Mouths group show at Te Uru last year.

Overall in this Te Tuhi show, Matt Coldicutt is the dominant presence with his delicate ink drawings of ramshackle Heath Robinson-constructed basketball backboards (here symbols of vocational or fiscal attainment and personal achievement) based on photographs taken in Aotearoa, Mexico, Guatemala and Cuba (some with hoops or nets missing)—seen in two galleries-and various witty bronze, rubber or concrete basketball sculptures present in the building and in the forecourt. Some of the latter incorporate recycled kauri beams and painted-over recycled hoops.

There are also suites of pristine architectural models (made out of cut white plastic sheets) two showing rows of three-storied domestic apartments, with adjacent basketball courts (sometimes on the rooves). One other model has a court under a geodesic dome; another has a hoop in the centre of a winding maze.

The models look at the role of community sport and its relationship to functional housing. Just how close the relationship of that recreation is, and how it compares with other community relationships embraced by the building dwellers, is perhaps the point. Coldicutt here (with so many drawings, so many architectural models, and so many inventive types of sculpture) seems to be indicating his own personal enthusiasm for basketball. But perhaps he is critiquing New Zealanders’ obsession with sport. Or is he really making more of a disinterested social observation? He is ambiguous.

Sport (as we all know) rules on the screens of our mass media and contemporary art is invisible, yet it is sport—not visual art—that places ads on our channels greedily desiring even more viewer attention. Perhaps Creative New Zealand should fund some advertising for its own team—giving art’s profile a promotional leg up by bombarding the masses. Encouraging the view that regularly investigating galleries and museums is normal, and not the behaviour of freaks.

Mr Hurrell, your relentless and at-any-price adherence to a COMPULSORY AFFIRMATION of art displays a strong predisposition toward totalitarian (if ...

If literary and artistic creations merely write an account of the current situation, reveal an unmediated display of the repulsive ...

DRAFT FOR A BIG CHARACTER POSTER

Mr Hurrell, your relentless and at-any-price adherence to a COMPULSORY AFFIRMATION of art displays a strong predisposition toward totalitarian (if not to say fascist) thinking.

This is confirmed 100% by your above call for CNZ to spend what would amount to millions of dollars ‘bombarding the masses’ with an advertising (propaganda) campaign tasked with promoting art to a level of normalised popularity that today (and in your opinion) only sport enjoys.

In a gesture toward neutralising yr little fascist writing/war machine, I posted the above poem (artwork) named “Draft for a Big Character Poster”. In short, the poem is a call to BOMBARD EVERYBODY/EVERYTHING and thus clearly presents itself as a preposterous gag, a mix up, a farce. Hence the poem neither negates nor affirms art, but rather uses an artistic form in an attempt at rendering your call inoperative.

Likewise, I neither hate nor love art, but rather remain passionately neutral, indifferent to art as a generality. Or better, I dwell in art as in-difference.

If literary and artistic creations merely write an account of the current situation, reveal an unmediated display of the repulsive side of things, and do not extol their bright side, if they do not express ideals and guide morality, then they cannot inspire the people to advance.