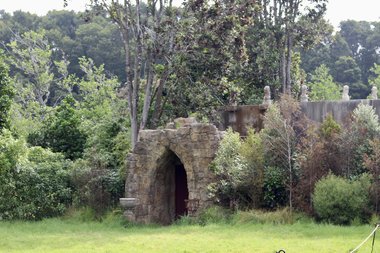 Designed to evoke feelings of beauty, to provide an escapist backdrop to upper class picnics and to invite philosophical or religious contemplation on creation, time, and the relation between the creative and rational aspects of the human mind and the organic development of nature, the Picturesque Garden originated in English and German speaking feudalist discourses that tried to overcome the alleged rigidity and artificiality of (French and Italian) Baroque and Rococo garden designs.

It is mindboggling: remnants of a fantastical 18th century Habsburg (‘Austrian’) Masonic story about ‘Ancient Egypt’ and the challenges and triumphs of modern concepts of rationality and love take postmodern shape in the suburban landscape architecture of the Hamilton Gardens. Alluding to 18th century European philosophical, novelistic and operatic traditions of the picturesque—particularly to Mozart’s opera Die Zauberflöte (The Magic Flute)—the Hamilton Gardens’ recent addition, the Picturesque Garden, represents an eclectically romantic, if ever so slightly spooky space that has instantly become popular with its visitors.

Full of aesthetic, cultural and philosophical references to historically, geographically and discursively remote places, with the Picturesque Garden the Hamilton Gardens have arguably received the most complex example of their attempt to adopt and represent diverse (horti)cultural concepts and constructions from around the globe. The result is a multiple paradox: for most visitors, the historical and ideological contexts of this new garden design will, in all probability, remain in the dark. But the way many visitors talk about and interact with (e.g. photograph) the new garden clearly shows that they perceive it as a kind of naturalistic stage set, which is fairly close to the intentions of the 18th century philosophical and artistic proponents of the picturesque.

What is on display here is the postmodern tourist’s appropriation of a complex space: an innocently simplistic, perhaps superficial appropriation. Canadian scholar and poet Robertson Davies—who was very fond of Mozart—once submitted that ‘one learns one’s mystery at the price of one’s innocence’; but in the case of the Hamilton Picturesque Garden it remains unclear if even its planners and sponsors have fully overcome the innocent view of the picturesque and contemplated the deeper mysteries of their newly commissioned space (as well as the philosophical topos).

The Hamilton Gardens are rich in lighter paradoxes. Built on the site of a former landfill, the public garden park is now a green landscaped area which has become one of the Waikato’s main tourist destinations. Attracting approximately a million visitors a year, the gardens are equally popular with domestic and international tourists. With the exception of the Te Parapara Māori Garden, the Mansfield Garden and perhaps the Sustainable Backyard Garden, for overseas tourists there are few parts of the 58 hectare space that are uniquely New Zealand.

All the major drawcards of the park—the Chinese Scholar’s Garden, the Italian Renaissance Garden, the Tudor Garden, the Char Bagh Garden or the American Modernist Garden—are copies of (horti)cultural traditions that have their origins thousands of kilometres away. For those New Zealand visitors of the estate who may not be able to travel overseas, the benefits of the gardens are significant; the 21 featured gardens provide an overview of major historical garden concepts and styles from all over the world. Botanical replicas of gardens from Ancient Egypt to the present day lie right at their doorstep.

Due to the varied financial resources of the planners and sponsors and the professional expertise of the designers and advisers, the presentation and curation of the individual gardens differs greatly. You may walk the magnificently laid out and well explained Chinese Scholar’s Garden or you may amble through much simpler designed and contextualised spaces such as the Jardin Hispanico or the Herb Garden. Overall there seems to be a lack of in-depth information or at even links to access comprehensive information about the horticultural designs, object d’arts and their cultural contexts. Due to its historical and discursive complexities, in the case of the Picturesque Garden, this deficit is particularly pertinent.

The Picturesque Garden which complements the Hamilton Gardens’ ‘Fantasy Collection’ was opened on 4 November 2019. Together with this new addition, the ‘Fantasy Collection’ comprises of the Tudor Garden, the Tropical Garden, the Chinoiserie and Concept Gardens, the Mansfield Garden and the Surrealist Garden. It is not entirely clear what exactly constitutes the criteria for  inclusion in this ‘Fantasy Collection’. A literary or (cultural) philosophical link springs to mind. But why then is the Tropical Garden included in this grouping but not, for example, the American Modernist or English College Garden?

The new Picturesque Garden may make one of the strongest claims to be part of the Fantasy Collection as its historical origins in European cultural philosophy and landscape architecture were deeply imbedded in the notion that the picturesque space or landscape was, to a large extent, a product of human perception, a catalyst and harbinger of human imagination in harmony with the creative forces of nature. As one of the first theoreticians of the picturesque, William Gilpin (who located the picturesque at the intersection of the sublime and the serene) put it: ‘[the picturesque] is expressive of that peculiar kind of beauty, which is agreeable in a picture.’ (1)

Designed to evoke feelings of beauty, to provide an escapist backdrop to upper class picnics and to invite philosophical or religious contemplation on creation, time, and the relation between the creative and rational aspects of the human mind and the organic development of nature, the Picturesque Garden originated in English and German speaking feudalist discourses that tried to overcome the alleged rigidity and artificiality of (French and Italian) Baroque and Rococo garden designs.

An early and stunning example of the English landscape design is Stowe Landscape Garden in Buckinghamshire, which comes complete with Elysian Fields, a Palladian bridge, a Temple to Ancient Virtues, a Cook Monument, Dido’s Cave and a beheaded statue of the de facto Prime Minister Robert Walpole (the political rival of Stowe Manor’s owner, Richard Temple, the 1st Viscount Cobham). Another fine example is the (landscape gardens) Landschaftspark Wörlitz some 60 kilometres Southwest of Berlin, which was built by Duke Leopold III. Friedrich Franz von Anhalt-Dessau and is today a UNESCO world heritage site. (2) It features a Gothic House, a Temple of Flora, a Doric Monopteros and a lake with an artificial island that is the also the site of a villa built as a gift for William Hamilton, the Duke’s friend. Next to the villa stands a 7 metre high artificial volcano, the ‘Wörlitzer Vesuv’, that has an inbuilt launching pad for fireworks.

Almost all of the picturesque landscape gardens included ‘artificial ruins’—replicas of fragmented and weather worn ‘ancient’ or ‘medieval’ architecture. The parks reminded their owners of the grand vistas and iconic artefacts that they had encountered on their ‘grand tours’ to Switzerland, Italy, Greece or other faraway lands. They also came in handy as an outdoor stage for concerts, operas and pastoral plays. Some enlightened rulers like Duke Leopold Friedrich Franz opened the parks to their subjects for recreational and educational purposes, reminding both the developing bourgeoisie and the peasants of the origins of ‘culture’ by pointing to its etymological roots: the ultimate refinement of nature through sophisticated horticultural and artistic endeavours. (Engl./ French ‘culture’, German ‘Kultur’; from Latin cultura, originally: tending, growing, cultivation). As a contemporary of the Duke, Friedrich von Schiller submitted: ‘The educated man befriends nature and honours her freedom while only constraining her capriciousness’. (3)

The Park in Wörlitz sits on 112 hectares of land, while the Hamilton Picturesque Garden occupies little more than half an hectare. That means that the grand vistas and the flamboyant diversity of temples, monuments and landmarks that the historical gardens displayed, could not be replicated in Hamilton. Much like its English and German predecessors though, the Hamilton Picturesque Garden is nicely connected with its natural surroundings: it is nestled in a stretch of partially revived natural bush near the Waikato River, which also provides some attractive viewpoints. It is a rather shady space, however atmospherically perhaps at least as conducive to the operatic and literary fantasies of ETA Hoffmann (one of the early godfathers of Science Fiction and one of Edgar Allan Poe’s heroes), Carl Maria von Weber and Mary Shelley as it is to Mozart.

The Picturesque Garden also sports an artificial ruin in the form of a castle gate and a few expertly crafted and positioned sculptures that refer to Mozart’s The Magic Flute—most notably a bronze statue of the bird catcher Papageno, a fantasy creature, himself half man, half beast. The charming statue was created by Christchurch-based artist Anneke Bester.

Faintly reminiscent of the Pseudo Palladian pavilions of European landscape gardens, the Hamilton Picturesque Garden has its own temple pavilion, if only of a miniature size. Underneath its architrave there is a copy of Karl Friedrich Schinkel’s iconic 1816 stage design painting for The Magic Flute that shows a roundelay of stars and, in its middle, the Queen of the Night floating on a moon sickle. One of the most seminal Central European architects, painters, city planners and designers of the first half of the 19th century, the multi-talented Prussian artist Schinkel was the student of David Gilly who, like his contemporaries Mozart and Goethe, was a Freemason. Similar to the Park an der Ilm in Weimar that Goethe helped design, the Hamilton Picturesque Garden refers to the ancient wisdom symbol of the sphinx that was of great significance to the secret society of the Masons.

Contemporary New Zealand Freemasons have been co-sponsors of the Hamilton Picturesque Garden and some Masonic symbols are alluded to through the artistic narrative of Mozart’s The Magic Flute. With Mozart, the (German) inscription of the Picturesque Garden’s gate, an old topos for rites of transition, points to ‘Natur, Vernunft, Weisheit’ (nature, reason, wisdom). The Magic Flute has often been read as an operatic depiction of some key ideas and practices in the Masonic tradition e.g. the maturing and refinement through challenges and rites of transition of the princely pair Tamino and Pamina and the more down-to-earth ‘buffo’ pair Papageno and Papagena. There are also theories that Mozart both presented and satirised key elements of 18th century arcane notions of eros, agape (charity), reason and science. A congenial, if ever so slightly poetically licentious depiction of Mozart’s life and the genesis of The Magic Flute is Miloš Foreman’s 1985 biopic Amadeus, which won 8 Academy Awards.(4)

The Picturesque Garden may be an attempt to (re)familiarise postmodern visitors with some grand narratives in the Enlightenment tradition. In order to do so, however, this novel and complex space requires much more contextualisation. Located at the intersection of the philosophically grounded ‘high art’ of the ‘Grand Opera’ and the sensual and entertaining tradition of the ‘Bürgeroper’ (‘folk opera’, ‘musical’), Mozart’s The Magic Flute may hint at how to do this successfully. 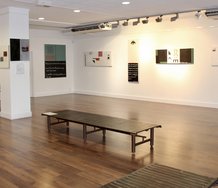