Stop All the Clocks 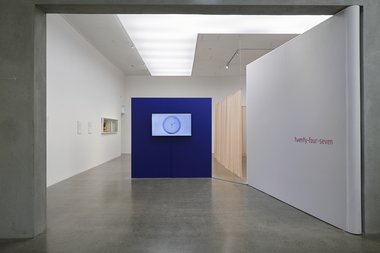 After a close look it soon becomes apparent how thematically tight this show is, for Natasha Matila-Smith's language-based installation, the Guttu and Kosugi film, and the Raqs Media Collective sculpture and photographs are all cross-connected. The processes of time and dreams are major components.

This excellent exhibition (the last one put together by Ioana Gordon-Smith for Te Uru before she moves south to Porirua) looks at the control of chronological duration, various social needs, and unexpected oneiric fantasies. Two of the artists are on the ground floor and the other two (collaborating filmmakers) are upstairs.

After a close look it soon becomes apparent how thematically tight this show is, for Natasha Matila-Smith’s language-based installation, the Guttu and Kosugi film, and the Raqs Media Collective sculpture and photographs are all cross-connected. The processes of time and dreams are major components.

The international trio, Raqs Media Collective, at the show’s entrance contribute a pristine clock with no numbers and manic (minute and hour) hands that move in unpredictable directions and speeds. Its erratic behaviour has more than a whiff of surrealism, with evocative pairs of words periodically appearing at the pointer tips. Sequentially these pairs suggest strangely ominous chopped up sentences being transmitted to the viewer from beyond. Here is an example: forage poison / where else disappear /simply levitate / hint taken / fervid metric / tight rope / free fall / horror concerto.

Further into the gallery are two horizontal photographs of published books on shelves, all devoid of text or lettering on their spines. These suggest questions like: is there thought without language? Can language be significant without some form of recording? If not, does documentation have a life span? Will all material containers of articulated ideas eventually fade or decay?

Natasha Matila-Smith’s installation filters emotions of loneliness, low self-esteem and depression through (what seem to be) the mingled methodologies of Jenny Holzer, Ruth Buchanan and Lawrence Weiner, using translucent curtains and texts on suspended banners.

Exuding the need for bodily contact and rich in heterosexual celebrity fantasy, the activated space—with texts like: I leave my laptop running all night long because somehow it makes me feel less alone—becomes an aching body/mind surrogate, channelling thwarted desire via the assumed speaking voice of the artist. It is entertaining and pathetic, absorbing and tragic, working superbly in the context that Ioana Gordon-Smith has created.

Upstairs the Ane Hjort Guttu and Daisuke Kosugi film tells the story of Naoki Hayakawa, an advertising director who while working extremely long hours, starts sleeping at his desk and having strange experiences there (such as watching his coffee cup move by itself across his desk, or finding a writhing fleece in his drawer, or being roughed up by his office colleagues) and on the bus (that is on one occasion filled with dried bamboo-stalks) home.

Hayakawa’s language (the storyteller is sensitively played by Kosugi) describing his ‘dreams’ is ambiguous. These occurrences could genuinely be oneiric, they might also be fanciful reverie (ie. imaginative daydreaming), or they could be vivid hallucinations (perhaps chemical in origin) that are experienced while he is fully conscious. It is not fully clear.

Concerned about his mental health he confides in his boss who consoles him by saying that a rich imagination produces better work results, and that he shouldn’t worry.

This is super-interesting show dwells on the vagaries of duration, rumination and perception at home or at work. Entertaining and thoughtful, it is well worth a trip to Titirangi.