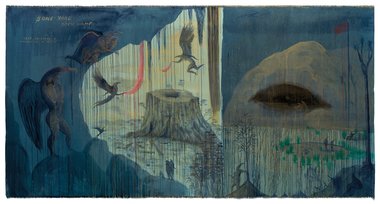 Hammond's love of music (decades ago he used to play in Christchurch's Band of Hope Jug Band) is obvious from the many song references in his painting titles—like those of an early influence, Philip Clairmont. He has often depicted musicians singing or playing instruments.

With its title referencing Bill Hammond‘s passion for drumming as well as painting, and pointing out the rhythmical cross-connections between the two, this new survey of about forty paintings—14 large canvases and 24 works on paper—celebrates both the raw earlier blockheaded ‘suburban neurosis’ (prevalent throughout the western world) and the later, much slicker, Aotearoa focussed ‘shag’ images. One deals with a sort of bored consumerist existential crisis, rock music-fuelled and spot-lit under electrical illumination; the other the beginnings of an environmental catastrophe, with avian-humans sitting in dripping forested landscapes, viewed under twilight.

Hammond’s love of music (decades ago he used to play in Christchurch’s Band of Hope Jug Band) is obvious from the many song references in his painting titles—like those of an early influence, Philip Clairmont. He has often depicted musicians singing or playing instruments.

We can see this in the strangely angled perspective of Radio On (1985), with its contortionist singers on stage, doubled over amid hovering shrieking woodgrains; or beneath the horse playing acoustic bass in Living Large 6 (1995), the constantly repeating foaming waves, shag beaks, treetops and vertical drips—set out like staves on a score, incessant shapes that can be played like notes in a Steve Reich composition. Or the curling background wallpaper motifs of Shag Pile (1994) or Staten Landt (1994) that softly pulse behind the dominant vertical (or drooping) bird forms.

In a sense, Hammond here is a grid-fixated abstractionist (like very early Larry Poons), not a storyteller as is sometimes believed. He likes manipulating form, flipping shapes around (or inverting them), mixing clashing ‘shoals’ or ‘flocks’ of different morphologies together so they mingle and interpenetrate.

Diversity is a keynote of this show. Though the event is not as sprawling as other surveys like Jingle Jangle Morning or 23 Big Pictures, there are plenty of surprises. Volcano Flag (1994) is a painting made on a canvas army tent, and with its geological, tattoo, bird and skeletal motifs floating in formally balanced isolation it clearly looks like a flag more than a fully spatially integrated painting.

Verdi Verde (2004-6) is related because of its lack of painted background. It references the botanical interests of Verdi the composer, but seems (because of its plant forms inside green portrait profiles) a nod to Alesso Baldovinetti (1426-1499) whose Portrait of a Lady in Yellow (c.1465) regularly appears in London’s National Gallery.

The black, white and red work on paper, Modern Dress Watch (1991), depicts a large digital Casio watch as a kind of theatre with curtains. It’s a dramatic setting, a peculiar slot that we peer into—where Macbeth is being staged. Through it we unexpectedly see some bikies in the foreground, having a barbeque in the sylvan countryside, and enjoying some drinks with live music.

A great show to linger in and explore, Playing the Drums is a marvellous introduction for those unfamiliar with or new to Hammond, and a terrific opportunity for further exploration for those who thought they had him sussed—and now realise they were mistaken. A treat.