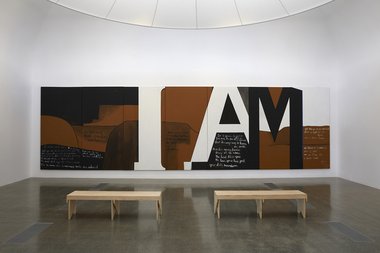 A 1970 work owned by the Victoria University of Wellington and toured by Adam Art Gallery Te Pātaka Toi as part of the centenary celebrations of McCahon's birth, the presentation helps introduce this extraordinarily painter to new generations, and spotlight his relevance to the current global zeitgeist, the planetary crisis.

Using the large gallery on the top floor of Te Uru, the one with the high dome that bathes the room in diffuse white daylight—and with no other paintings to compete with, only some illuminating correspondence and pamphlets in vitrines, and a contextualising video on nuclear testing—McCahon‘s whopper Gate III (motivated by his vehement opposition to nuclear testing, and conceived while he was living in Titirangi) has never ever looked so splendid.

A 1970 work owned by the Victoria University of Wellington and toured by Adam Art Gallery Te Pātaka Toi as part of the centenary celebrations of McCahon’s birth—with many McCahon events and exhibitions now occurring in the country’s main municipal galleries—the presentation helps introduce this extraordinarily painter to new generations, and spotlight his relevance to the current global zeitgeist, the planetary crisis. Along with much national activity will be a new batch of publications containing new biographical information and perhaps fresh interpretations of his momentous practice.

Looking closely at the painting, the most conspicuous words in the text (intertwined with its rolling landscape) make up the uppercase phrase I AM, referring not to what might seem to be a self-admiring artist but the wishes of the Christian God (New Testament in its compassionate ethos and human/divine conversation, but Old Testament in textual sourcing and transcendent tone) instructing humanity. (In the related popular music of the late sixties you can compare the self-absorbed lyrics of Neil Diamond with Leonard Cohen‘s invocation of the voice of Yahweh). In this theme Gate III links up with (amongst others) key works like I Am (1954), A Question of Faith (1970), and Victory Over Death 2 (1970).

With today’s currency of “In this dark night of Western Civilisation” (on the second panel) it thematically locks into the current disturbing era of Trump and Johnson, and possible war with Iran-as well as McCahon paintings like Scared (1976), Gate: Second Series (1962), or Mondrian’s Chrysanthemum (1971). We take the possibility that “the earth shall stagger like a drunken man” extremely seriously, and desperately hope that its guardians somehow “may enter the gate of wisdom.” For the sake of our planet and all its forms of life.

Gate III is not just impressively massive; it is stunningly designed, and the perfectly proportioned (for this installation) white wall on which it is placed showcases the “dark night” on the far left, and the beckoning blinding light above “the pure land” on the far right—a pre-Garden-of-Eden kingdom on which God pours his blessing and “saving power.” These contrasting skies balance out, in coordination with the dramatic white I and A and black M.

The painting is a perfect synthesis of an elegant visual arrangement and a hard-hitting message about the survival of our species. As Adam Director Christina Barton points out in her excellent introduction, this imposing work, commissioned initially for the touring Ten Big Paintings show presented by ACAG in 1971, never got included in any of the important touring McCahon surveys like Colin McCahon: Gates and Journeys (ACAG, 1988), Colin McCahon: A Question of Faith (Stedelijk, 2002) or I Will Need Words: Colin McCahon’s Word and Number Paintings (NAG, 1984). Perhaps with its huge size (7 portable panels that combine to make a work 3 metres high and 11 metres long) touring it was considered impossible.

This is a wonderful mural to experience in Titirangi. The intense white light of the room resonates with the flowing light of the text and the depicted light of McCahon’s sky and letter forms. A spectacular yet intimate artwork. Community-focussed yet individualistic.