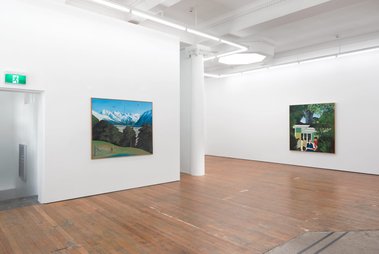 This is an intriguing show because of the complexity of Scott's practice and the different strands of imagery and thinking patterns he worked through. Though 'realist', these works tie in with his abstractions too.

In the large space on the ground floor, this posthumous show of five Ian Scott figurative paintings, all about fifty years old, intrigues for several reasons.

Firstly some of these are Pop art precursors (fifteen years too ‘new’) to ACAG’s New Image exhibition curated by Francis Pound in 1982, with Hartigan, Watkins, Frizzell, Chilcott, Killeen, Wong Tai Sai, and Baloghy. Works like Motor Rocker (1969-70) and Untitled (1966) probably would have fitted in easily.

Secondly their compositional structures often hint at the abstract grid paintings that Scott was making in the early eighties, and which got him included in ACAG’s The Grid: Lattice and Network exhibition, curated by Andrew Bogle. The diagonal vectors and triangular shapes of Mt Cook View (1966) anticipate the later diagonally aligned Lattice paintings, and the vertical rectangles and horizontal vectors of Untitled (1966) the more complex (diagonally, vertical and horizontally aligned) and sparer Lattice works.

Now the collection of works here is a mixed bag. My own view is that Scott’s Lattice works are far superior to his ‘realist’ paintings—they are on a par with the best of Walters—though many of his large panoramic ‘appropriation’ paintings are conceptually interesting and worth spending serious time with.

Some of his later works, in particular the series of young female models in their underwear, I dislike, not so much because their dodgy John Kacere-style content but because of what I see as dreadful painting technically (the problem with Mt Cook View here). Maybe he was stirring in a calculated fashion on both counts. Despite Ed Hanfling’s book, I’m baffled.

So this show that his son Christopher has put together…it mixes the great (Motor Rocker) with the awful (Mt Cook View). Motor Rocker is wacky but convincing. Despite its flaccid hands and crushed feet, I love its nutty wormlike clouds, sculpted lettered topiary, punctuating truncated (and phallic) trees, and stacked up composition. Odd though it is, it works. It is endlessly fascinating.

I find the two ‘plane’ paintings (Untitled, Chase (Over the Waimakariri Headwaters)) engrossing too. What’s with the aircraft? What we might have thought was an unfeasible explanation in 1966, is now (post 9/11) very real. Nothing can be ruled out, though in the bifurcated Untitled, one plane seems to have mysteriously crossed over from the righthand half to the left (to crash into another aircraft), and a mountain has shifted too. It is the sort of joke you might get in a Beano comic—skipping out of the frame—but in a large ‘serious’ figurative oil painting it is wildly audacious. Something Magritte might cook up.

This is an intriguing show to ponder because of the complexity of Scott’s practice and the different strands of imagery and thinking patterns he worked through—as indicated by Warwick Brown’s excellently informative book. As I’ve pointed out, though ‘realist’, some of these works compositionally tie in with his best abstractions too. That is where their real value lies.