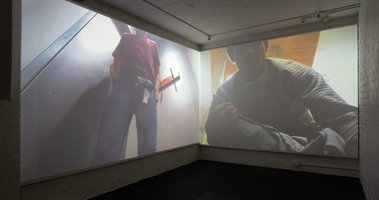 There is a layering theme common to both these sets of works, that of the paint-surfaced outer 'diary' layers (front and back covers) and the canvas supports that lie underneath; versus videoed jean fabric and the human body that comes to fill it—and how what is underneath comes to be exposed.

Two videos and six paintings (one in seven parts) by Campbell Patterson are being presented downstairs at Michael Lett.

The videos at the base of the stairs show Patterson in the mirrored changing rooms of various clothing stores, taking off his regular jeans and trying on a range of (usually much tighter) new ones. Squeezing into them, appraising his body shape, while grunting and huffing during the strenuous process of getting in or out—the sounds drowned out by loud music over the shop’s p.a.—is part of the work’s humour.

Also admirable is his lack of vanity, as men clambering around in t-shirts, socks and undies invariably look ridiculous. Especially when filmed from below—which foreshortens. Makes them pudgier.

Around the corner and down the far end of the corridor (past the toilets) are several sets of wonderful paintings, that could be mistaken for scratch works—or a type of sgraffito originally involving wax crayons.

With several colours under each undulating bending line, Patterson’s technique (with pale top coats and no masking) is very different—involving precise oil paint application with small brushes within the Mardenlike rhythmic cursive loops—building up the top layer to the edges of each line. They have an unentangled quality in their linear configurations, being not too complicated; not too busy.

Patterson here presents three particularly successful diptychs, each called diary (front/back), with the thin lines turning back gently at the rectangular canvas edges, without being abrupt, so that the change in direction is not sharply angular but curved. The thickness of the line allows easy detection of the changing blocks of colour underneath.

Another type of image, not with clusters of linked meandering overlapping lines but much simpler with delineations of basic wonky circle shapes, allows you to examine the top coat as a field. The lines deceptively appear more incised.

These Clock works reference not only the circular face of a standing horologe, but also the time it takes to visually track the presented line, appreciating the shifting colours beneath it. The use of line here is very loosely related to the ‘line paintings’ of Simon Morris, where total time of a work’s execution is coded into its displayed linear length and configuration.

Patterson’s videos are more about speed than time, really lack of speed as a source of laughter—and the sense of competition between taut stitched fabric and straining brute strength.

There is a layering theme common to both these sets of works, that of the paint-surfaced outer diary layers (front and back covers) and the undercoated multi-hued canvas supports that lie underneath; versus videoed jean fabric and the human body that comes to fill it—and how what is underneath comes to be exposed, only to be re-covered. Clever and engrossing art.