Yet the life of Tongans in Okaihau has in many ways been different from the life of the relatives they left behind in the Friendly Islands. The Okaihau Tongans plant and harvest, like their relatives and ancestors, but they do so without the rituals and celebrations that have justified and sanctified Tongan gardening for centuries.

Wendt’s passage shows us the irony of the way white New Zealanders, a group with only a couple of centuries of history in the South Pacific, sometimes query the indigenity of Pacific Island migrants. But Wendt’s words also express the paradox of Pacific Island identity in New Zealand. Many of the members of New Zealand’s Pasifika communities migrated south from tropical Polynesia relatively recently—a few years ago, or a few decades ago. And yet they share a deep history with the indigenous people of Aotearoa, and their languages and cultures are the result of centuries of adaption to life in the South Pacific. Are Pasifika New Zealanders immigrants, or indigenes, or both?

Matavai Taulangau is Tongan, but he grew up in the small Northland town of Okaihau, two thousand kilometres from the reefs and lagoons and talo plantations of his ancestral homeland.

Taulangau’s parents were both born in Tonga. They were part of the great migration that brought tens of thousands of Pacific Islanders to Australasia in the last decades of the twentieth century. In his famous essay ‘Our Sea of Islands’ Epeli Hau’ofa celebrates this migration as a re-enactment of the Homeric journeys his Polynesian ancestors made across the Pacific many centuries earlier. Where the ancient mariners used star compasses and bark cloth sails to find their way, their descendants turned, in the 1960s and ‘70s, to jet planes and passports. The journeys of modern Polynesians, though, were as perilous as those of their ancestors. In the cold cities of the south, they were greeted by a strange and often hostile people. They were given jobs that whites did not want, had their houses raided by white cops at dawn, and were beaten up in bars by drunken white racists.

Despite these troubles, Pasifika peoples have survived and thrived in the vast cold islands that Tongans call Nu’u Sila. Today the Auckland suburb of Otahuhu is nicknamed Little Tonga. Its streets are studded with kalapu, or kava clubs, and its clothing shops sell ta’ovala, the waistmats that are essential at formal community occasions in Tonga. Whenever Tonga’s rugby league team comes to town, the main thoroughfares of Otahuhu and adjacent suburbs are jammed by crowds dressed in red, waving the kingdom’s flag.

But Matavai Taulangau‘s parents did not follow most of their countrymen and women by settling in Auckland, or in one of New Zealand’s other cities. They headed, instead, to Okaihau, a town on the fertile ridge between the eastern end of Hokianga harbour and round shallow Lake Omapere. By settling in Okaihau, they isolated themselves from most of the Tongans in Nu’u Sila. At the same time, though, they were able to preserve the agricultural way of life they had learned in their homeland. Instead of getting a job in a factory, like so many Tongans in the cities, Taulangau’s father established a plantation where, with the help of his family, he grew kumara.

Tonga has an ancient and sophisticated farming tradition. When Captain Cook stopped at Tongatapu, the kingdom’s capital island, he marvelled at the order and fecundity of its gardens, which were laid out between a lapidarian network of roads. Tongatapu, Cook decided, was like a South Seas version of Holland.

A few other Tongan families joined the Taulangaus in Okaihau; together they were able to raise a small church, where their homeland’s idiosyncratic form of Wesleyanism could be preached. Taulangau’s father established a kalapu in the sleepout at the back of his home, and sat late into the night drinking kava with his family and friends. The community the Taulangaus helped found is still strong. Today five percent of the students at Okaihau’s primary school have Tongan blood running in their veins.

And yet the life of Tongans in Okaihau has in many ways been different from the life of the relatives they left behind in the Friendly Islands. The Okaihau Tongans plant and harvest, like their relatives and ancestors, but they do so without the rituals and celebrations that have justified and sanctified Tongan gardening for centuries.

In pre-Christian Tonga an ‘inasi, or festival of first fruits, marked each harvest. Farmers would present their best crops—yams and talo as long as paddles, coconuts swollen with fresh juice—to their shaman-king the Tu’i Tonga, amidst singing, dancing, kava drinking, feasting. The ‘inasi has mutated into an annual series of Royal Agricultural Shows, more sober events where members of Tonga’s modern royal family inspect the wares of farmers.

The crop Tongans call kumala was almost absent from ‘inasi, and is not prominent at today’s agricultural shows. In Tonga and in many other tropical Polynesian societies kumala is a marginal crop. It arrived less than a thousand years ago, after being brought back from South America by Polynesian explorers, and did not rival the popularity of yams and talo. Kumala only became important in the last five hundred years, on the cool southern and eastern fringes of Polynesia, where settlers learned it was tougher and more reliable than other root crops. In Te Ika a Maui, Rapa Iti, and Mangareva, kumara became a staple.

Even the kalapu where Matavai Taulangau’s father drank kava has less to do with Tongan tradition than we might think. For centuries, kava drinking was the preserve of the kingdom’s royals and chiefs, who sat around huge kava bowls in positions determined by their social rank. Drinking sessions were preceded and accompanied by elaborate and solemn speeches, and followed by feasts prepared by tu’a, or commoners.

But in the 1960s the Tongan philosopher Futa Helu began holding informal kava sessions with other commoners in his Nuku’alofa home, where social issues were frankly discussed. Helu later established a university called ‘Atenisi, where staff and students sat together around kava bowls. Influenced by ‘Atenisi, groups of commoners elsewhere began to build their own kalapu, and founded a network of kava clubs called Fofo’anga. Today, thanks to the Tongan diaspora, hundreds of Fofo’anga clubs exist, from Aotearoa to Australia to Alaska. The Okaihau kalapu where Matavai Taulangau’s father drank with family and friends was, then, an expression of the modern democratisation of Tongan culture, rather than the avatar of an ancient institution.

Matavai Taulangau migrated to Auckland after finishing school in Okaihau. Last year he went back to his birthplace, to film the kumara harvest on the plot of land his late father worked for so many years. As a kid Matavai met his father’s demands, and grudgingly pulled kumara from the earth of Okaihau. But the place of the crop and its harvest in his father’s and his community’s life never interested him. Now he wanted to look carefully, and make a record.

Matavai Taulangau’s film of the harvest shows members of his family and of the wider Tongan community moving amidst the furrows of a field guarded by groves of mature rimu and totara. A cardboard box half-filled with kumara floats on the gentle brown swell of earth. Taulangau’s camera zeroes in on a dozen kumara half immersed in soil. Their purple skins shine, like some rediscovered treasure. There are no tractors and no trucks in the film. The harvesters work with their hands and with their backs, the way their ancestors did. One of the few concessions to modernity is a green wheelbarrow. It brims with purple, seems about to capsize.

It is fascinating to compare Taulangau’s film with Expensive Movements, a much exhibited two-screen video installation whose scenes were shot by his fellow Tongan, Salome Tanuvasa, in an Auckland brewery and hotel several years ago.

Both Tanuvasa and Taulangau have unobtrusively filmed groups of men and women working hard. But where Tanuvasa’s film communicated a powerful sense of alienation, of disconnection—her factory workers seldom looked at each other, let alone communicated, and her hotel workers stared worriedly at the beds they were trying to repair (both sets of workers toiling in stark artificial light)—Taulangau’s piece suggests a different environment, and a different ambience. His workers stop to stretch, to chat, to smile, to breathe the country air. They are united, not separated, by their labour. Their workplace is also their community. Taulangau’s film is a homage to a people who have recreated and refined an ancient way of life in a new home. 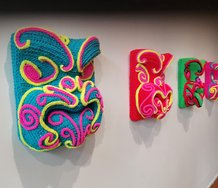 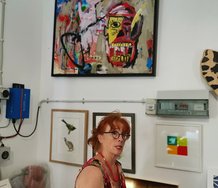 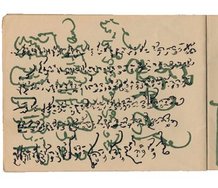 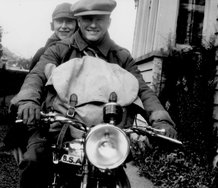