The ‘Paranormal’ at RAMP 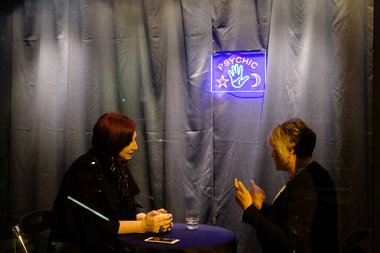 Many would balk at the notion that clairvoyance, telepathy, precognition, psychokinesis and other paranormal claims could be classed under the heading ‘sacred'. A category mistake, some might say. Psychic phenomena have more to do with mental processes that claim to contradict physical laws, while the sacred is usually associated with the realm of the gods inside a religious context, involving something worthy of worship.

In the world bequeathed us by contemporary philosophers and theorists where everything goes, where openness is embraced and the ‘other’ welcomed, the phenomena of psychics and physic readings is perhaps, even for epistemological pluralists, just a bridge too far. The neo-pragmatists may hold the floor, but even here the door to practices involving darkened rooms and messages arriving via mediums from the other side, is politely shut.

This subject is often associated with the arena of cheap hucksterism and quackery, exposed long ago by stuntman, Houdini, and more recently by James Randi--who put to the blowtorch all paranormal and pseudo-scientific claims.

Nevertheless, these are desperate times where hunger for the spiritual (spiritual but not religious)—for the sacred, the divine, the paranormal and things that go bump in the night—still prevails. The presence of current primetime television shows devoted to hunting such phenomena in ‘haunted’ dwellings attest to that. These breathless spook-filled ‘documentaries’ cater to a certain demographic among the populace.

This is the territory Jen Bowmast has chosen to explore in her recent show at Ramp, Sacred Sites. (It relates to similar explorations by curator Natasha Conland in her AAG international group show Mystic Truths, 2007.) Bowmast’s rationale, inside the world of the rational, is to valorise the intuitive and emotional as an alternative (even female) form of knowledge, as opposed to what she perceives as male intellectualism, especially of the French variety.

I missed the psychic readings that took place at the opening, but the two chairs and small oval table draped in a long black cloth, situated in the front gallery, remained as a testament to this performance piece that involved professional psychics plying their trade: “You are about to embark on a journey.” “You are at a crossroads in your life.”

Negotiating one’s way further into the gallery space involved parting thick black heavily-draped floor-to-ceiling curtains which gave way to Gallery One. Here, the viewer was confronted with three large photographic inkjet prints on the wall. The first, I am not sure that’s where your vibration is right now, is of course, standard fare in psychic parlance, and to certain ears sounds almost comical in its use of pseudoscientific terminology.

The depicted image appeared to be a large sheet of crumpled tinfoil embedded in what looked like pools of oil. This strange constructed ‘landscape’ shone out from a black background. The second image was a repetition of the first with the tinfoil sprinkled with what looked like turmeric. Entitled A gorgeous holy darkness, one couldn’t be sure if the artist was serious. The “holy darkness” looked too contrived and tinny to be convincing.

The inner sanctum of Gallery Two had to be negotiated through another layer of long black drapes, which on entering, plunged the viewer into a completely darkened space except for a small spot-lit area that illuminated a large table on which were placed, rune-like and in a circle, various ‘arcane’ objects. The spook factor was intensified by the fact that all the walls of the gallery space were covered in the same black, full length, curtains.

The objects in question—small bone-like pieces, peppercorn seeds, various items of wood, metal and stone (nephrite, jade, obsidian)—took on the appearance of things that might have been found near the cauldron of the Witch of Endor. Suspended just above this table top collection was a huge impressive bell structure whose clapper had been replaced by a large loop of rope. Here we are deep inside a world construed to evoke elements of ritualistic magic and divination, albeit a little clichéd and stereotypically creepy. Calling the divine was more voodoo meets Harry Potter than site of sacred enactment.

Many would balk at the notion that clairvoyance, telepathy, precognition, psychokinesis and other paranormal claims could be classed under the heading ‘sacred’. A category mistake, some might say. Psychic phenomena have more to do with mental processes that claim to contradict physical laws, while the sacred is usually associated with the realm of the gods inside a religious context, involving something worthy of worship.

Rudolf Otto in his classic, The Idea of the Holy, described the experience of the numinous as something that inspired dread and linked to the transcendental, producing a feeling of both trust and terror which worked itself out in myth and religious adoration. What is interesting, historically, is the late nineteenth century that witnessed the decline of religion, saw the rise of the psychic phenomena, spiritualism, mesmerism and the like fill the void. Perhaps history is repeating itself here. People crave magic, holding that the world is merely a flimsy veil hiding deep abiding truths that belong to other realms to do with one’s destiny that is written in the stars.

The growing secularisation of society has seen some pushback, with attempts to resacralise things like politics, ethics, personal development and even art. This is the context in which Bowmast is operating. The artist’s attempt here to broaden the boundaries didn’t quite come off, perhaps because the artificiality counted against it.

In some ways, Bowmast, who consults psychics as part of her art practice (just as Dane Mitchell once used witches for his installations), exemplifies a reversion to nineteenth century romantic ideas of the artist, conceived as shaman-like, gifted with exceptional vision, and possessed of transcendental and mystic connection—able to penetrate the secrets of life and nature.

The way the exhibition was constructed—heavily curtained dark rooms, the covering of the psychic’s table descending to the floor—took one back into that part of the Victorian world which revelled in the heterodox, caught up in millennial cults and popular ‘paranormal’ phenomena.

This show would have appealed to and excited all the New Age travellers out there among us, hungry for mystery and magic in a secularized economy, after the iconoclastic work of male philosophers and scientists, like Friedrich Nietzsche, Charles Darwin and Edwin Hubble have done their darndest. For the more sceptical however, the aesthetic theatricality of it all would have proved entertaining.