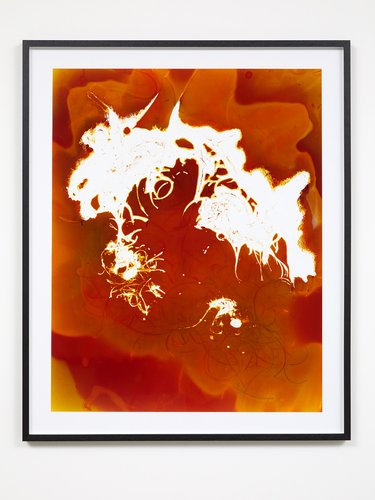 There are the meandering linear configurations or striations that have piercing white or cream light streaming through, butted hard against their slivered edges ('Cerebration', 'Alopecia', 'Hygiene'). Or there are others where there is a border line—usually dark blue or green—sticking closely to the wobbly, topographic contours ('Venom', 'Antidote', 'Ripe', 'Abrasion').

Seven photograms feature in Australian artist Justine Varga‘s presentation downstairs in Two Rooms, this photographer being first introduced to this country through the McNamara Gallery in Whanganui and then the Emanations exhibition in New Plymouth. Her colourful ‘chromogenic’ abstractions make for compelling viewing. With seeping colours that bleed at the edges and fields that sometimes looked bleached, they have high impact and look a little like large monoprints.

As cameraless photographs made by working directly onto film these images link to a feminist conceptualist history, let’s say like mixing Lee Miller with Cornelia Parker: the former a photography innovator; the latter a pioneer in transmuting unusual substances to draw out new possibilities of meaning.

In other words, in constructing her intensely saturated coloured images, Varga is very aware of the loaded connotations certain substances or corporeal materials (many of them-like blood, saliva or hair—from the female body, made by the female body, or damaging—like spider venom—to the female body) bring when used for masking out or manipulating light.

If you analyse the images there seem to be two groups, depending on how you view the organic bleached-out shapes surrounded by (usually) bright red fields. There are the meandering linear configurations or striations that have piercing white or cream light streaming through, butted hard against their slivered edges (Cerebration, Alopecia, Hygiene). Or there are others where there is a border line—usually dark blue or green—sticking closely to the wobbly, topographic contours (Venom, Antidote, Ripe, Abrasion).

To decipher Varga’s poetic gender-political tropes you have to look closely at the silhouettes and the work labels, and also at small islands of intricate coloured detail peeking through from photographic remnants lurking behind the dominant field. These photograms are complicated works, far more complex and physically layered than say, those by Miller, Ray, Lye, Kepes or Moholy-Nagy. They can easily be mistaken for abstractions, but they are not reductive and their symbolism is quite literal. There is a processual narrative to Varga’s process of selection of bodily elements and the placement of their marks.

Even though they are optically rich, because of the chosen (usually abject) incorporated items they are also oblique or imprecise; deliberately so—especially with titles like Cerebration that references the act of thinking. You look at the forms, try to decide on the origins of the different morphological traces—their provocative stimulii—and attempt to figure out which body part or secretion caused what negative forms or textural attribute, how they interconnect as a group to form a logical semantic statement beyond compositional positioning, and so on.

The title Memoire refers to a maternal feminist legacy—as well as a diary. With this in mind, you are encouraged to speculate on each substance’s or material’s impact—interpreting possible causal chains and the politics that drives them.