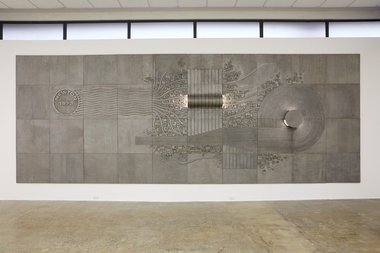 Apart from the splendid mural, the strongest works by far in the show are the six screen and woodblock prints in the narrow back room, while the weakest are the paintings that embrace abstraction while nervously flirting with a narrative symbolism.

Known in Auckland for his modernist bronze relief sculpture positioned outside Artspace Aotearoa on K’ Rd and for the large aluminium mural that used to be in that (once) Post Office building, the late Guy Ngan’s career is looked at here and in another survey currently being held in the Dowse Art Museum.

At Artspace Aotearoa, the PO mural is presented in all its abstracted glory—on a floor above where it used to be—a franking stamp represented as a ‘Newton’ comet with a ‘Gustav Klimt’ tail streaming over Auckland City and what could be interpreted as the swirling waters of the harbour, or spiralling vectors of mail vans bringing in letters and parcels.

The patterns and fine surface textures, along with the built-in radiating electrical lights, really make this deceptively heavy-looking work a treat. It looks stunning in this elegantly understated array of choice items, surrounded by various Ngan prints, maquettes, ink paintings, speculative texts, architectural projects, photographic documentation, and design proposals—all made available for prolonged consideration. Plus there are commissioned tributes from three other artists (Bronwyn Holloway-Smith, Stella Brennan, Mark Harvey), along with a very interesting timeline (designed by Kelvin Soh) setting out the historical contexts for his family’s (convoluted) interaction with China, New Zealand, and Europe.

Apart from the splendid mural, the strongest works by far in the show are the six screen and woodblock prints in the narrow back room, while the weakest are the paintings that embrace abstraction while nervously flirting with a narrative symbolism.

In the latter it is not the flirtation per se that is the problem (the interpretative ambiguity works well with the mural) but the timidity of insisting on presenting a story for the work to illustrate. For example, the beautiful abstraction Procreation #2, with its black, white and yellow concentric circular (and vertical rectangular) forms, has in its centre a tiny little (barely detectable—a third of the way up) heterosexual couple that makes you cringe. It seems to be motivated by an espousal of population growth. Noticing it (and the title) hamfistedly alters the meaning of the otherwise extremely inventive design.

Ngan’s colourful textured screenprints and woodcuts from the seventies—mostly aligned along one wall—are delicately gorgeous, and show his talent for clever organisation of tonal elements. They have held up well over time, and remind us what a great era for New Zealand printmaking the seventies was.

The other side room, one with shelves on a long slanting wall, shows mounted reproductions of various works that Ngan used for planning his survey exhibition at the Dowse. These images are memory aids, not artworks, and feel out of place in this show. They don’t have the technical finesse of the original items displayed elsewhere, none of the original surface qualities, so it is like looking at a scrapbook showing a career overview. Pieces of documentation that suggest you might like to visit Habitation in Lower Hutt.

That show is more physical with its scale, use of extended sumptuous colour, and density of small sculptures. This comparatively austere one is more about proffering a research opportunity for those interested in his writing on being a teacher and a designer, and providing a sample of work that might hook you; while the other seems more bodily immersive. One is cerebral, stately and cool; the other more experiential and exuberant.