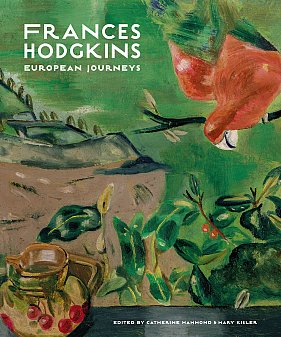 Particularly interesting, and something AAG did with their Gordon Walters publication as well, is the inclusion of a forensic exploration of Hodgkins' materials and technique by the gallery's principal conservator, Sarah Hillary. I am particularly appreciative of the way this brings to the fore an aspect of art that the public rarely gets exposed to. The book also helps to put to bed the peculiarly tenacious myth that Hodgkins was a late bloomer—this couldn't be further from the truth.

Coinciding with Auckland Art Gallery’s long-awaited Frances Hodgkins show of the same name celebrating the 150th anniversary of her birth, AAG and Auckland University Press have released this magnificent volume. Handsomely designed, it is lavishly illustrated with lengthy essays presented as chapters. That Kisler has contributed several of these is just icing on the cake, because I love her way with prose. It is always lively and informative, never dry or condescending. The cover design by Keely O’Shannessy is stunning.

Both the curation and editing of the book are no easy task, and Hammond and Kisler are to be commended for managing to corral together these wonderful highlights of Hodgkins’ half century living in the UK and Europe (she died in Dorset in 1947 as one of Britain’s pre-eminent artists, accorded the sort of attention rarely granted women artists mid-century). This volume pulls together some heavy hitters: Hammond and Kisler from Auckland Art Gallery; Frances Spalding, former editor of the Burlington Magazine and Fellow of Clare Hall, Cambridge University; and Elena Taylor of the University of New South Wales among them. There’s not much new to be said, but likewise there’s nothing overly contentious either.

Hodgkins’ geographical coverage and contact is astonishing, not settling for London or even Paris. She was there in the early days of St Ives, and ventured as far afield as the low countries, Italy, Catalunya, Ibiza and Morocco—and the book does a wonderful job putting that into digestible chunks of context. Hodgkins was present on the ground, engaging with the Seven & Five Society, Bloomsbury, and seeing innovations like Cubism when they were new. Even without visiting the exhibition, one gets an excellent, contextualised sense of the evolution of Hodgkins’ painting from gestural impressionism to something startlingly unique, conceptual—and impossible to put in an art historical box.

Particularly interesting is the inclusion of a forensic exploration of Hodgkins’ materials and technique by the gallery’s principal conservator, Sarah Hillary. I am particularly appreciative of the way this brings to the fore an aspect of art that the public rarely gets exposed to. The book also helps to put to bed the peculiarly tenacious myth that Hodgkins was a late bloomer—this couldn’t be further from the truth. She showed great promise even in New Zealand and was producing superlative work by the century’s turn. I find her portraits of Māori to be refreshingly free of Victorian sentimentality, something which probably owes much to Girolamo Nerli.

I do wonder though, given the framing, if more could have been made of her tutelage by Nerli in Dunedin (a rather brilliant itinerant painter of the Macchiaioli school and a very minor Italian aristocrat), as this was Hodgkins’ first direct contact with the European avant-garde. With the presence of Nerli, former Glasgow boy James Nairn (whose work Hodgkins knew) and Petrus van der Velden of the Hague school, some of the most interesting painting in New Zealand was happening in the South Island, with a strong Barbizon influence (hence all the plein air). The European voyages began in the mind—she was thirty-two when she left New Zealand, mentally a fully-formed adult.

Dare I say I also find it odd Peter Entwisle’s William Mathew Hodgkins & his Circle (Dunedin Public Art Gallery, 1984) isn’t in the bibliography? Anyway, these are the most minor of cavils. It’s a landmark book for a landmark exhibition and worthy of anyone’s bookshelf.