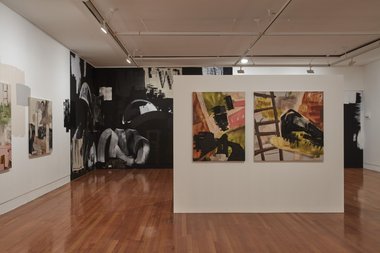 We have here political exhortation done via symbolism subtly—for no language is present (apart from the painting titles of mostly sixties/seventies pop hits from the United States that sometimes reflected the civil rights movement, and Salgado's essay in the brochure)—mixed with raw and eloquent markmaking (especially with dry brush and spray). Representation and abstraction mingled to become physically and mentally imposing.

This exhibition, an installation that is a lot more than the sum of its painting parts, carries on some of the suburban landscape themes of Pataialii’s RM show of six paintings last September. Now though, there are less vistas and more fragmentation—with AbEx gestural motifs spectacularly spilling across the wall, exploiting tonal contrasts of black and white in a vaguely Motherwellesque fashion—but with a mural and lots of rendered body and building parts, and tropes like ladders, yachts in the harbour, goalposts in the park, fences, boxing gloves, and crampons.

All to convey—using a misture of rollered, brushed on and sprayed linear or blocked black paint, with drawn charcoal and frottage-like printing methods—an assertive in-your-face liberatory ‘Proud to be a Black Woman pushing against the Dominant White/Western Hegemony’ Pasifika ethos. Looking closely at social mobility from the point of view of working class immigrants—and conceptually related to Peter Robinson’s ‘Maori’ car and plane sculptures of the mid-nineties.

Any political exhortation done via symbolism subtly—for no language is present (apart from the painting titles of mostly sixties/seventies pop hits from the United States that sometimes reflected the civil rights movement, and Salgado’s essay in the brochure)—mixed with raw and eloquent markmaking: especially with dry brush. Representation and abstraction mingled become physically and mentally imposing. Seventeen works total.

Walking around the perimeter containing the rectangle of her space allows you to detect the conceptual tensions within plush black velvety polyester that reference imperial eagles and ‘kitsch’ Chicano painting, and soft canvas dropcloths—with protruding seams, that hint at transience—attached flush to the walls.

Much of AbEx comes out of Surrealism, but this politico-symbolist work, though rich in emotional signifiers of expressive subjectivity, is much more community oriented than about the individual self and the unconscious. More anger than angst.

Seductive and spatial in its manipulation of tone, plane and quickly applied brusherly or rollered texture, and vaguely connected to the ‘macho’ aspirations of Katharina Grosse in its ambitious scale, the work avoids fiddliness in the artist’s touch, being boldly graphic, even sweepingly calligraphic. At tmes almost—strangely enough—Gimblettish.

The show is such you can decode its literalist symbolism with the clip-board eye of a sociologist or historian, or you can fixate on the formal arrangements of dramatic marks, ignoring community narratives. The marks are imbued with an art historical baggage (and masculinist ethos) from which they cannot be separated, but that tension adds interest. The looseness of the iconography allows the political content to be more furtive, to dissolve, shift and reappear: lurking in abstraction and processual bodily traces.