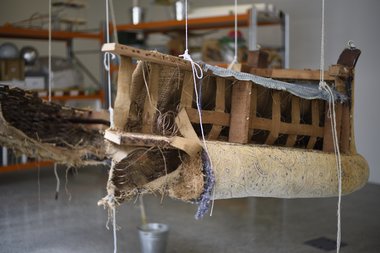 In Gallery Two we have the storage shelves that you can peruse closely to help jog your memory of past Cullen treats. At the other corner of the room is the suspended, spring-exposed Fainting Couch that he contributed to Allan Smith's 2012 'Running on Pebbles' Snakepit show. The title for Cullen's mutilated, bisected sofa is quite wonderful, implying what he surely must have always known, that he was great at producing fetish objects, and that the couch itself had fainted—its living spirit collapsed—not that of any adjacent gallery visitor.

Not a survey but a sampler that draws on many lesser known Paul Cullen sculptures and drawings, Building Structures + is cleverly divided into three carefully controlled spaces-each with a clearly distinctive identity. It is full of surprises, one being that Cullen‘s kinetic works are deliberately excluded (but visible: dismembered, bubble-wrapped and stashed in a ‘storage racks’ installation)—the stasis more hauntingly tragic for the late artist’s absence. Especially as it is where he used to teach.

Also missing are what I call the inverted ‘pinioned’ works, that turned high ceilings into ‘floors’ with propped up furniture. I adore their nihilist gesture, their brilliant stupidity.

In Gallery Two we have some storage shelves that you can peruse closely to help jog your memory of past Cullen treats, by examining a stashed selection. At the other corner of the room is the suspended, spring-exposed Fainting Couch that he contributed to Allan Smith‘s extraordinary 2012 Running on Pebbles: Through-lines with Incidents and Increments Snakepit show. The title for Cullen’s mutilated, bisected sofa is quite wonderful, implying what he surely must have always known, that he was great at producing fetish objects, and that the couch itself had fainted under duress from torture—its living spirit collapsed—not that of any adjacent gallery visitor.

Gallery One you can split in two. Ink drawings are seen in both halves, but on one side are some tables and a vitrine showing notebooks, storage boxes, posters, an architecturally modified stool and original balsa models. On the other side of the long dividing wall is a marvellous (partial) reconstruction by Marcus Moore of Cullen’s 1979 Barry Lett exhibition, of almost the same title, using mostly a wide strip of carpet, delicate struts of balsa, and fine wire mesh. A dozen small configurations comment on the then current, minimalist landscape sculpture gaining popularity in the States—and seemingly also, the Bechers’ ‘water-tower’ photography in Germany. These, being low, greatly test the passing viewer’s powers of observation. A Lilliputian sculpture park.

On the walls the two types of ink drawing intrigue, because they are so different. One with brushes that explore shape, looks at European landscape design (2002): the planting of trees in grids that can be split and disrupted by encroaching roads. The smaller, delicately linear, pen drawings (1975-7) on the other hand are Duchamp inspired, filtered through say Glen Baxter, Rei Hamon and science experiment diagrams. One looks down on the organisation of orchards and the surface of the earth; the other looks through the air, across at dematerialised fragmented forms hovering disconnected in space.

The biggest surprise for me is the group of Formica wall reliefs using toy train tracks (1991). The angular shaped Formica pieces have had their veneer pried off, and that’s been scrunched or folded over, and then reglued onto the chipboard base. They are very funny as acts of creative vandalism. Some have bits railway track nailed on, and sometimes those bits of curved track have sides missing. They’ve been maliciously tampered with. Sabotaged.

With the messed-up train tracks the reliefs appear to be a wry comment on colonialist expansionism, but showing it thwarted, parts severed—with a sense of separation incorporated, of isolation. As with the pencils, rules, buckets, tables, chairs and globes he liked to experiment with—ingredients to be added to or subtracted from—Cullen prods and squeezes the metaphor attendant to the (once-readymade) material/object, starting with instinct and transmuting his thoughts about symbolic substance into controlled and focussed semantic channelling.