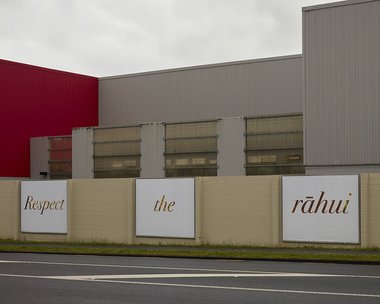 On the Reeves Rd site, opposite the gallery entrance and backing on to the Pakuranga Mall complex, Robyn Pickens’ three synchronised hoardings say it loud and clear: Te Kawerau ā Maki have asked us all to stay away from the Waitākere kauri forests, to minimalise contamination from dieback disease. Please co-operate.

Now Pickens could be accused of being too school-teacherish, too prone to finger wagging, and that some irresponsible readers (idiots who resent being told what to do) might deliberately go through the tracks out of spite—if the conservation discussion was suddenly new to them and they were prone to kneejerking, to being oppositionally inclined. However most civic minded people who love this country’s natural heritage will applaud her motivation, and the wishes of Te Kawerau ā Maki.

The glowing golden pieces of solidified resin in the background are toffeelike windows looking back in time, preserving creatures and plant parts from earlier aeons.

Pickens (with Browne’s help) seems to be saying: what about the creatures and plants of our own era, that can get trapped in the sticky sap of living kauri trees? Wouldn’t it be wonderful for future generations to discover that this process has kept on continuing, that these portals to the past have continued to be produced—and not suddenly stopped, to suddenly disappear. Let’s join together to keep these manufacturers of time capsules fully functioning.

The trouble is, asking for ‘respect’ does not imply backing of the law. A request can be legally ignored. Transgressors need to be heftily fined, and an order made that is enforced. If you step over that fence, you will get hammered. That needs to be made clear.