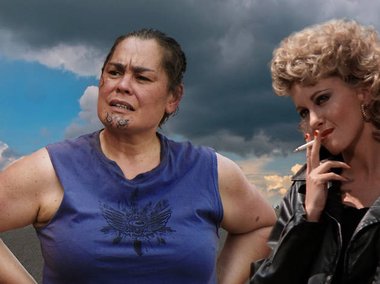 Simply put, TERROR NULLIUS is a tale of good versus evil. It is a political revenge fable which sees politicians like Pauline Hanson and Tony Abbot being decapitated by a boomerang, 'Romper’s Stomper''s Russell Crowe assassinated by an eagle, and the girls from 'Picnic at Hanging Rock' being savagely killed by Mick Taylor from 'Wolf Creek.'

SODA_JERK
Terror Nullius, 2018
Screening at City Gallery on the half hour. 55 mins long.

TERROR NULLIUS is a fast paced, hard-hitting monster of a film created by SODA_JERK, a duo comprising of Australian born, New York based sisters Dan and Dominique Angeloro. This 55 minute mash-up, now playing at City Gallery, seeks to undermine Australia’s cultural icons and political realities by cut-and-pasting borrowed images and sounds from the country’s moving image archive. Pitched as a “part political satire, eco-horror and road movie”, the film lurches between moments of silliness, sadness and unflinching social critique, leaving you to wonder about the country depicted.

The film initially attracted much interest after the Ian Potter Cultural Trust, a philanthropic trust who awarded SODA_JERK with $100,000 to fund the film, withdrew its promotional support only five days prior to its release. The trust deemed it “a very controversial piece of art” and, according to SODA_JERK, “un-Australian”. Unsurprisingly, this dummy-spit did not tarnish Terror Nullius‘ reputation in the slightest, and the film has since entered a worldwide tour—making its way from Lisbon, to Berwick, and now to Wellington. It was included in this year’s NZIFF.

Simply put, TERROR NULLIUS is a tale of good versus evil. It is a political revenge fable which sees politicians like Pauline Hanson and Tony Abbot being decapitated by a boomerang, Romper’s Stomper‘s Russell Crowe assassinated by an eagle, and the girls from Picnic at Hanging Rock being savagely killed by Mick Taylor from Wolf Creek. In fact, a large chunk of screen time is given to the girls from Picnic at Hanging Rock--a work of fiction that has plagued Australian audiences for centuries. (To this day, it is not uncommon for tourists to visit Hanging Rock in Victoria and re-enact scenes from the 1975 film, calling out “Miranda!” atop the rock, despite the site’s violent colonial past.)

The film uses animals as stand-ins when discussing Aboriginal rights and concerns. Whilst many animals take a more violent approach—eg. flesh eating sheep attacking a Bicentenary celebration—Skippy the Bush Kangaroo instead eloquently voices his frustration about the exploitation and commercialisation of traditional Aboriginal land. Here, he begs the question of whether the fate of the white girls in Picnic at Hanging Rock will become a “national obsession” that takes precedent over Aboriginal concerns.

TERROR NULLIUS undermines Australia’s cultural icons and celebrities, begging its Aussie audience to reconsider who they deem representative of their country. The film sees justice satisfyingly doled out to Australian poster boy Crocodile Dundee, as well as Mad Max‘s Mel Gibson—their sexist remarks as the cause of their demise. The death of baby-faced Mel Gibson is particularly extravagant, being prompted by his recorded abusive phone call to IRL ex-girlfriend Oksana Grigorieva. As payback, the feminist gang led by Mad Max: Fury Road‘s Charlize Theron wages war; violently trashing Gibson’s car and watching it burn. Following the wake of the Me Too and Times Up movements which saw the careers of Hollywood big-rigs and alleged sexual assaulters Harvey Weinstein, Louis CK and Kevin Spacey go up in flames, scenes like these feel refreshingly necessary.

TERROR NULLIUS is filled with moments of both humour and sadness; leaving you feeling giddy with excitement one minute, and defeated and powerless the next. The film lovingly embraces absurdist humour and meme culture in a way not unlike other Australian piss-takes: the web-series, The Big Lez Show and satirical news website, The Betoota Advocate. Most notably, the film playfully nods at the internet’s recent embrace of The Babadook as a queer icon: a top-hatted monster in the 2014 Australian horror film, directed by Jennifer Kent. However, skip to the end of Act 3 and you’re almost moved to tears as Lantana‘s Anthony LaPaglia listens to a tape where John Pilger speaks about Indigenous Australians from his 1986 documentary, The Secret Country, explaining how “Britain waged war, carried out in the name of God, king, anthropology, money and land.”

During Australia’s current political climate, which sees the country’s fourth prime minister in five years, TERROR NULLIUS feels timely and important. And although the act of watching vaguely feels like a protest, it is important to harness that anger and uncomfortability, and channel it into something physical. To educate, to protest, or as Ben Juers so eloquently put it in his review, ‘Some Big Fatalism‘, “to recruit and train birdlife to assassinate naff celebrities.”