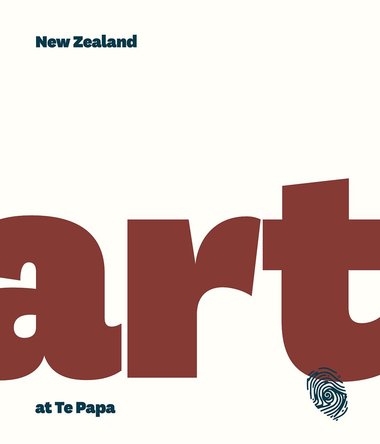 All that said, this is still an important reference book and a stunning object to own. It guides the casual reader through the richness of Te Papa's collections and may, perhaps, encourage them to check out the online catalogue of the collections on the museum website. Given the recent and alarming restructuring with the potential risk to the collections,the public needs to be informed about and encouraged to take an interest in this taonga and what happens to it.

To start with, I must say this is a beautifully produced book, well crafted, elegantly designed, highlighting 270 items from New Zealand’s national art collection (arguably Auckland Art Gallery’s collection is superior, but that’s a debate for another day), extensively illustrated (though better images are often to be found on the museum’s website). The editor, Dr Mark Stocker, is an experienced and knowledgeable art historian, and the contributors are all experts in their respective fields. Taken for what it is, it is a significant achievement and a worthy inclusion on any bookshelf or coffee table.

One of the chief strengths of the book is the highlighting of deserving, but lesser-known, artists and artworks that many readers might not be familiar with. Julian Hooper’s Queen (2008/2014) for example, Giovanni Intra’s exquisite 365 days (1991), Eileen Mayo’s Moths on the Window (1969), Olivia Spencer Bower’s Punakaiki Seas (c.1933), Rata Lovell-Smith’s Arbitus Berries (1936), Edith Collier’s charming Little Schoolboy of Bonmahon (c.1915)—although, does Herbert Dobbie‘s 1880 fern cyanotype really qualify as “art” rather than “natural history”? I really hate the book only capitalising the first letter and initial letters of proper nouns in the titles of artworks, and I refuse to perpetuate it here. If that’s Te Papa’s official style, they need to rethink it.

Something I like about the one work, one picture, one essay approach, combined with the chronological order, is that you can see how, for example, Frances Hodgkins’work dramatically evolved over decades. The format falls apart, however, with Colin McCahon’s Northland Panels (1958), oddly squished up in a corner over two pages. It’s a terrible design decision. Couldn’t they have included a detail or made an exception? A fold out, perhaps, or a three page spread? For one of our most revered art works this seems remarkably misjudged.

Relatively mediocre works seem to have got the nod on the basis of the famous names they’re attached to, or just really weird choices when there are far better or more informative works in the collection. For instance, Rudi Gopas is represented by the pretty enough, but rather tame, Lyttelton Landscape (1959), which shows nothing of the more interesting developments of Rocky Coast, Kaikoura (also 1959), or the truly cosmic works like Forming Matter (1972) or the rare photocopier work All Atoms (1979). The untitled 1969 Ralph Hotere included is far from the most interesting of his works in the collection when you have his illustrations for Hone Tuwhare, and dozens of other works to choose from. I appreciate the Black Paintings don’t lend themselves well to reproduction, although confusingly enough, eighteen pages later Orange on Black from the year before, 1968, is reproduced and discussed. But why there, when mostly the format of the book is to include similarly dated works by the same artist together?

In the acknowledgements, Stocker notes that “[t]he book is a successor to New Zealand Art: Cook to Contemporary“, William McAloon’s 2010 publication, puffing itself up as “an altogether more ambitious undertaking than its predecessor” to coincide with the opening of Toi Art, Te Papa’s new dedicated art gallery. However, it seems to ignore that it shares an almost identical title with another McAloon book, the 2009 Art at Te Papa (for which I can find no acknowledgment in this volume), prefixed with “New Zealand” to signpost the national focus. Surely that is going to be confusing?

Ironically, for a book on New Zealand art, early on, pages 26 and 27 are given over to Joseph Dufour and Jean-Gabriel Charvet’s famous wallpaper Les Sauvages de la mer Pacifique (1804), translated (as seems to be the done thing these days—Auckland Art Gallery does it too—and I understand the logic) as “The native peoples of the Pacific.” Look, we know the attitudes of the past are far from politically correct by today’s standards, but must even museums be so twee and euphemistic? The literal translation as “savages” gives a far more accurate flavour of the power dynamics and patronising European attitudes at play in historical context in my opinion.

Putting that aside, given Les Sauvages has no intrinsic connection to Aotearoa (it’s two eighteenth-century Frenchmen making wallpaper depicting Tahiti), and it seems obvious (to me, anyway) that it’s been shoehorned in because of its use as the substrate for Lisa Reihana’s In Pursuit of Venus [Infected] (2015), which, with some disingenuous tweaks, became Emissaries at the 2017 Venice Biennale. Rebecca Rice, Te Papa’s curator of historical art, doesn’t mention Reihana in her essay, but why not? That would at least justify the inclusion to the reader. Even if that wasn’t the reason, it seems entirely remiss not to draw attention to something that underscores the work’s ongoing significance.

As Stocker notes in his introduction, “[c]ustomary Māori art”—what truly odd phrasing — “is not discussed here.” Well it jolly well should be. “However, Māori and indigenous Pacific peoples and cultures, as depicted by Pākehā (European) artists visiting or inhabiting New Zealand, constitute a vital element of the collection…” I’m going to stop there because this part of the sentence needs unpicking. By “customary Māori art”, Stocker presumably means traditional Māori visual culture as historical artefact, and true to his word, the only Māori to be seen before the book hits the 1960s, are as passive subjects painted or photographed by white people (I find the definition of “Pākehā” as generically “European” to be problematic).

The trouble with this, aside from the obvious issues around arbitrarily carving up Māori art into pre and post European contact—thus privileging European perspectives, and the generally low level of Māori representation that results—is that it appears to have been extended to exclude a lot of Māori material from the collection that isn’t particularly traditional or “customary”, like the Te Kooti flag, or drawings of similar flags made by William Francis Gordon in the 1860s. There is Tene Waitere’s Tā Moko panel with the striking realism of its three-quarter profile, commissioned in 1899. Nor does it make much sense to me to exclude material that is an obvious precursor to Māori modernism, like Anaha Te Rahui’s carved patterns made in 1909. All of these are eminently worthy of inclusion and testify to Māori cultural dynamism in response to Western influences.

Declaring pre-20th century Māori art to be a distinct category of its own seem glaringly out of touch with modern thought. Consequently, it’s a very white book that seems to have more Canterbury regionalists in it than tangata whenua (with the caveat that I haven’t toted them up), and as such seems to deliberately absolve itself of having to meaningfully represent or serve 14.9% of the population who happen to be indigenous. That’s a most peculiar agenda for a publication from our national museum. The book begins in 1777 with Cook’s third voyage, for heaven’s sake, or at least works painted by the artist John Webber over the decade following his return from that fateful trip. It feels an incredibly regressive place to start such a publication in 2018. Who is the intended audience? Presumably not one familiar with the collection and with a narrowly European view of New Zealand history.

In the later twentieth century the absence of textiles also seems a striking omission. Perhaps this also reflects the book’s apparent exclusion of applied arts—odd, given Stocker’s interest in numismatics and Art Deco. But hang on, jewellery is applied arts, and included are Luisa Tora and Molly Rangiwai-McHale’s Dear Culture Vulture (2013), Areta Wilkinson’s Hei tupa (2013), and Neke Moa’s Kei hea te komako e ko (2014)—but no Lisa Walker (despite Justine Olsen, Curator Decorative Art and Design, having put together the major show of her work this year) and no Karl Fritsch—so again we are confronted with the book’s hopelessly arbitrary approach to interpreting its own criteria.

It is worth noting too that, except for very rare exceptions like Christine Hellyar’s installation Clutch, Brood and Echo (1990), ceramics don’t appear in the book at all, certainly not on their own terms, even as sculpture: no Ann Verdcourt, no Paul Rayner, no Madeleine Child and Philip Jarvis (all represented in the collection). That’s a ridiculous oversight.

The final section, “1999—2018: Art for a New Millennium” is decidedly thin, beginning with a mediocre modified found painting by Tony de Latour from 1999 and a couple of lacklustre Saskia Leeks from 2001, none of which are particularly distinguished from what they were doing in the tail-end of the previous century, but light years different from their work since 2010 or so. Peter Peryer? Really? However, Stocker is to be commended for the inclusion of video work such as Angela Tiatia’s Hibiscus rosa sinensis (2010) and Nathan Pohio’s Asleightofhandmanoeuvringofastillimageintosomethingmoving (2005). As a chapter, it doesn’t strike me as all that representative of the last twenty years of art practice in New Zealand—either that or it says something rather significant about Te Papa’s recent collecting of contemporary art. The historical content is definitely stronger.

All that said, this is still an important reference book and a stunning object to own. It guides the casual reader through the richness of Te Papa’s collections and may, perhaps, encourage them to check out the online catalogue of the collections on the museum website. Given the recent and alarming restructuring with the potential risk to the collections—not on the level of what happened to Brazil’s national museum—the public needs to be informed about and encouraged to take an interest in this taonga and what happens to it. A better way to do that, however, might be a broad range of smaller and more specific themed publications as educational resources, or something altogether more comprehensive and encompassing. I think I can confidently predict this volume will not be the last word, just as McAloon’s two weren’t, but we need to be looking forward rather than back in approach.