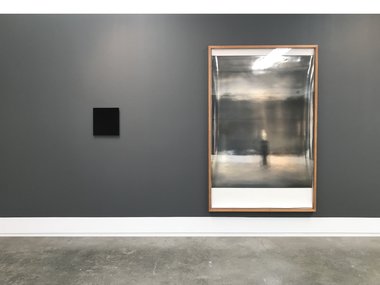 This twelve artist show looks at the notion of a ‘portrait' without a visage, a visual study of a human subject without a referenced physiognomy. Selected by Andrew Jensen, it presents a wide selection of sculpture and paintings, teasingly subverting the conventions of facial representation.

In this twelve artist show, Fox Jensen McCory look at the notion of a ‘portrait’ without a visage, a visual study of a human subject without a referenced physiognomy. Selected by Andrew Jensen and written about in an elegant pink catalogue, it presents a wide selection of sculpture and paintings, teasingly subverting the conventions of facial representation. The gallery walls have been painted a dark grey which makes the white sections of any painting or sculpture glow.

One of the artists, Gary McMillan, presents a realistic portrait of a head of a woman who is looking at a fence, focussing on her neck and the back of her head, Gerhard Richter style. McMillan’s painting method of course, is very different from Richter’s. It is not blurred or smeared, but with its fine horizontal lines, it looks more like an embroidered tapestry.

Sam Harrison’s white bronze bust of a woman’s head tightly covered with a pillowcase or sheet, faces the wall. A flap on the bedware could be a nose, and this ambiguously looks like a head facing into the room; a lovely surrealist object that is quite haunting.
Two other works, on opposite short walls, present mirroring: literal reflection—each a blurred configuration of the gazing gallery visitor’s face. Coen Young’s large rumpled vertical sheet of chemically treated, shiny, smoky-silver, heavy paper is presented versus the burnished graphite-on-linen stretcher of Matthew Allen where metallic silvery smears emerge from black streaks at the edges.

Günter Umberg’s dark square, projecting out from the wall on bevelled sides, shows a mystery self of deep deep blue, an internal void that reveals a refusal to step into the light. On the other hand Geoff Thornley’s relatively small canvas on the opposite wall, displays a closed doorway of pink flesh, with underpainted dragged lines blurred in the style of Francis Bacon—a restless, rectangular symbol of contained corporeality.

Two complex squares from Imi Knoebel use overlapping strips of paper—bearing ‘bristly’ brushed-on acrylic paint—as bordering frames that can be interpreted as looking through at the attire or furnishings of decoratively inclined personalities, while in the stockroom, as a two panel work set in a corner, Winston Roeth’s contribution seems related to Duchamp’s two portal/one door installation (Door as a Substitute for Two Doors, 1927) that can never shut off (or open) both entrances (to two rooms) simultaneously. It suggests a ‘cornered’ split self that alternates in its bid to escape, hugging the wall both times.

The precise industrial looking graphite drawing by Ceara Metlikovec seems like a large, extremely delicate, bar code that encodes a person whom scanning will vibrantly bring to life—in the context of this show a satire perhaps on bureaucratic procedures and governmental paperwork. Despite its ornate frame, the very large painting by Tomislav Nikolic on the longest wall is a sculptural object that encourages the viewer to examine it from all angles, checking out its coloured painted planes tucked into various unobtrusive spots. It could also be a metaphorical doorway the viewer is expected to step through, the softly painted canvas edges providing a sort of portal. It is the most imposing artwork in the room, just simply as a vertical rectangle.

Two wall reliefs by Jan Albers play with light and form, one in an acrylic box quite akin to a cubist portrait, with a soft orange luminosity on its top half of clustered triangular forms that suggest a complexly facetted head. The other work is an organic ceramic tray—glazed silver with empty gridded partitions, tilted floors and undulating sides—flat on the wall and proffering as nibbles enticing imaginary traits and visual charisma to keep you lingering.