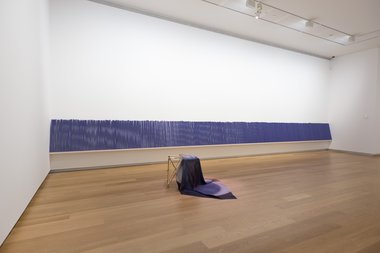 The sprayed on Shoyeido Incense is undetectable to the casual visitor but the aroma from the line of sticks is heavenly; quite overpoweringly delicious and not sickly. One odd byproduct is that your olfactories become resensitised. While looking at this show I became very aware of the various aftershaves and perfumes of the different male and female gallery guards as they did their rounds—walking past exhibits and visitors. It added another unforeseen, but pleasurable, dimension.

A very clever show-parts of which hark back to Radiant Matter Part 1, the elegant presentation Dane Mitchell did with (curator) Mercedes Vicente at the Govett-Brewster in March 2011—this complex exhibition again looks at the circulation of scent molecules in gallery space, but semantically (and architecturally—via layout) also stacks it up with other layers linked to sight and optics. This show was earlier presented in the Mori Art Museum.

‘Clever’ shows can be soul-less and forgettable. Here though, the olfactory sensations pack a lot of emotional punch. There are several types of ‘scent’ that waft into the nostrils of the attentive gallery visitor:

The first thing you come across is the Iris perfume constructed in collaboration with the Takasago International Corporation. It bubbles and percolates in an open glass bottle in the first space enter, its delicate aroma barely detectable.

In the second space there are also the undetectable (but pumped out) smells of the bell-jar / camera lens and a nearby Japanese (Edo period-influenced) parasol that is colour-matched with the grey-blue of Dane Mitchell‘s own irises. You will not notice them (it is impossible) but their emissions still being measured for “solid-phase microextraction technology sampling material”—this data to be later engraved as graphs and statistics on displayable brass plates that are placed in vitrines. An Iris flower also goes through the same process.

Then there are the two fusego (brass lattice racks) that hold up silk cloths on which are printed images of a young Dane Mitchell’s iris. One is sprayed daily with the Takasago scent. The other (two rooms along) is sprayed with an incense aroma created with Shoyeido Incense Co..

And most obvious of all—because they are leaning against the righthand wall in a long mauve row that extends through three consecutive rooms—there is the penetrating scent of unlit Shoyeido Incense sticks, so many (160 kilos) that it would take ten years to use them all up if burnt one at a time.

The sprayed on Shoyeido Incense is undetectable to the casual visitor but the aroma from the line of sticks is heavenly; quite overpoweringly delicious and not sickly. One odd byproduct is that your olfactories become resensitised. While looking at this show I became very aware of the various aftershaves and perfumes of the different male and female gallery guards as they did their rounds—walking past exhibits and visitors. It added another unforeseen, but pleasurable, dimension.

Like with any pungent smell, Mitchell’s exhibition ‘infuses’ (with its visual and olfactory presence) through the last three consecutive rooms, mixing with six works from Auckland Art Gallery’s international collection. Four of the six (from Terry Fox, Shusaku Arakawa, Richard Hamilton, Gerhard von Graevenitz) are in printed editions, while the other two are a film (Amie Siegel) and a unique, chemically-driven, sculpture (Alan Sonfist).

Of these Collection works, the two highlights I think (for what they bring to Iris Iris Iris) are the 1971 embossed tyre forms (Five Tyres Remould (Portfolio)) by Richard Hamilton—an early use of computer technology that ends up having unnerving similarities (in a sense merging into) with Hamilton’s other passion which he recreated, Duchamp’s very famous Large Glass—and Alan Sonfist’s 1965/1985 Crystal Enclosure, where crystals in a transparent acrylic box are constantly being replenished by the light and heat of a lamp encased in the supporting plinth below.

The porous conceptual and formal relationship between Mitchell’s Iris Iris Iris and the Collection works is repeated in the similarities between the computer tyre drawings shown by Hamilton, and Duchamp’s component Water Wheel (attached to The Glider) in The Large Glass, and the inverted parasol/funnel-shaped Sieves that capture the Illuminating Gas from the Malic Moulds. A less visual connection also can be detected in the relationship between the unseen (but obviously active) bulb and Sonfist’s crystal-lined acrylic box. A nice way to finish this (successively) five room show, one which could have ended up overly determined—but is not.