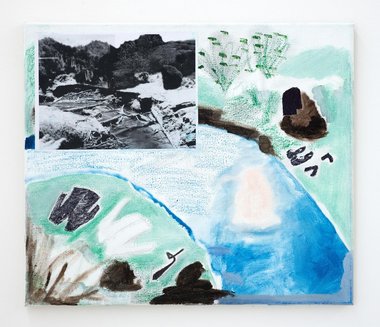 Ngakuru's paintings are similar to the sculptures with the comparisons. One, 'River Bathing (Mokau)', shows a photograph of a river bend stuck over the corner of a larger acrylic painting of that same river bend. You compare the landscapes, pondering over the trees and rocks. Then you notice a figure in the painted water, a blobby white figure. The gallery catalogue tells us that the land the river passes through is ancestral land.

The putting of these two artists together at Hopkinson Mossman is a bit of a puzzle—apart from the NA/AN thing of their initials—although there is perhaps a vaguely Gambia Castle ad hoc feel in Ngakuru’s practice. However Gambia Castle usually didn’t stick tightly to a visual brand, the participating individuals being quite varied in their practices—and Nick Austin was particularly distinctive. He lives in Dunedin now after moving there from Auckland for a Frances Hodgkins Fellowship, and is an established name. For Ammon Ngakuru on the other hand, this is his first dealer show.

Austin presents thirteen acrylic-on-canvas paintings of Christmas present wrapping paper: painted ‘parcels’ that are really relief sculptures as the painting extends round the sides. In this light the birthday present exhibition title is pretty funny, while the works reference early Pop Art and the methodology of artists like Malcolm Morley who gridded up postcards and handpainted enlarged versions with a fine brush. With Austin, there is no change in scale, and the rhythms of his loose paint application are what make the works—along with the unintended (but good) inaccuracies in the proportions of the duplicated letters that reference the original ornamental paper.

Austin’s obsessively repetitive paintings, with their pencil lines that peek through and small white gaps, have an appealing rawness. They vary in the saturation of the decorative colours (some are more pastel) and the density of patterned Christmas motif (others have less background). My favourites are the small ones. They have a compressed power akin to the block paintings of John Nixon. Another work—midsized—of a crowd of hovering Santa hats, has the gentle rhythms of very late de Kooning.

These ‘empty parcel’ works are called Metaphysical Present(s), a pun on ‘presence.’ They allude to structures or forces that are not detected by our senses—only by logic—and which may not exist anyway outside our bodies.

One painting is surrounded by six cellophane wrapped greeting cards depicting carp or goldfish. They are positioned like a sort of halo. The goldfish could be a symbol for spirit or souls, while also referencing an earlier Aquarium series of paintings made over 2008-12. When you look at that series closely you then realise Austin has made these printed card images from his earlier work, and that the metaphysical connection refers to the body from which we can’t escape, like a goldfish trapped in a tank. The Christmas-papered Metaphysical Present canvas is a kind of tank.

Ammon Ngakuru’s three sculptures and two paintings seem to semantically play off rival internal elements jammed together. A thin yellow plastic PAKn’SAVE bag is dumped on the floor, filled with a large sprig of flowering gorse. Is it about consumerist buying patterns and the cost of essential groceries, or the pleasure of comparing the yellows? The Hedging title teases us about any certainty of interpretation.

A flat oblong plinth rests on four homeopathic medicine bottles labelled ‘Flower Remedy’ and listed as ‘crisis support’, each standing bottle tucked under a corner. Is the plinth a substitute for a horizontal reclining body that wishes for better mental health? The title says Great Spacious Living so maybe it is about a domestic architectural environs on the verge of collapsing?

A tangled bundle of tiny glowing LED lights lies on the floor, in close proximity to a handful of raisins scattered nearby. Is this a mathematical test? Do the numbers match up? Should we be counting? On the other hand, the title, For Energy, sets out a functional relationship, a causal connection for consumers of raisins.

Ngakuru’s paintings are similar with the paired comparisons. One, River Bathing (Mokau), shows a photograph of a river bend stuck over the corner of a larger acrylic painting of that same river bend. You compare the landscapes, pondering over the trees and rocks. Then you notice a figure in the painted water, a blobby white figure. The gallery catalogue tells us that the land the river passes through is ancestral land.

Another painting, The Neighbourhood, again has a subtle tension. It has an opened-up, shallow, cardboard box flattened and cut to resemble four houses lined up on the street. Thin exuberant watercolour is very loosely applied, but a black house on the far left seems to have newspaper collage pasted underneath. As a sardonic comment on the aspiration of a harmonious community we see scrawled across the bottom, the words: ‘to the fiction.’

Ngakuru provides a nice foil to Austin’s cheery ‘metaphysical’ prezzies, one that brings an unforeseen symbolic dimension to the raisins on the floor, and the living space balanced on medicines. From both artists: clever work.