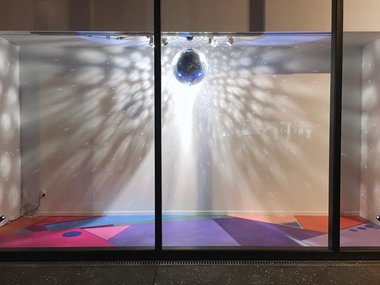 The colourful funky geometric shapes themselves suggest the work of the world's first abstractionist, the Russian Vassily Kandinsky. Kandinsky was a synesthetic. When he saw colour he heard sound, and Novak has paid homage to the great pioneer by constructing, in video format, such an experience. Moving images (coloured triangles, circles, squares) play across the screen while soft and singular piano notes accompany the visuals. It is video art at its best.

One of the most famous paintings of the late nineteenth century would have to be Edvard Munch’s The Scream. What is instructive about the iconic work is that the artist took the latest graphics from the then new design movement, art nouveau, and employed them in his famous painting. The whiplash line helped convey the existential anguish of Munch’s traumatized figure positioned on a narrow bridge in Norway, somewhere above a mental asylum where Munch’s own sister was incarcerated.

The world of art and the world of design often coincide. Each employs the same ingredients — shape, line, colour, composition. And there has been a fruitful interchange between the two disciplines, historically. A twentieth century example would be Jackson Pollock’s famous slash and drip paintings which became the inspiration for wallpaper design in the 1950s; as well as a stimulus for skater patterns found on the latest kitchen lino floorings from the period.

Another would be Roy Lichtenstein who took a black and white newspaper image advertising holiday ventures, involving a girl catching a ball at the beach, and translated it into Pop Art. Then a New Zealand advertising executive returned the favour, in 1990, by using Lichtenstein’s remake and incorporating it into a video clip advertising Pineapple Lumps. The woman from the painting comes alive, leaps into the air and catches a bag of lollies.

I mention all of this because at Wintec’s Ramp Gallery, Auckland artist Shannon Novak, seventy years after the Pollock lino debut, has combined graphic design and art in his current show, Unbounded. And one of the works is a piece of lino fitted onto the floor of the gallery space, on which are printed various hard-edged abstract forms using a high-end commercial Pop Art palette, exploiting all the wild and abrupt geometric shapes that are part of the artist’s oeuvre. The effect is stunning. And yes, you are allowed to walk on it, although it seems a sin to do so.

Entitled Open, the work is positioned in a narrow alley just behind the gallery window facing onto the street. The slightly cramped space enhances the meaning of the piece (originally called Bound) which referred to feeling confined and unable to express ones true self, in the artist’s case, about being gay. Hanging from the ceiling is a large disco mirror ball which carries historic connotations associated with homosexual liberation.

The colourful funky geometric shapes themselves suggest the work of the world’s first abstractionist, the Russian Vassily Kandinsky. Kandinsky was a synesthetic. When he saw colour he heard sound, and Novak has paid homage to the great pioneer by constructing, in video format, such an experience. Moving images (coloured triangles, circles, squares) play across the screen while soft and singular piano notes accompany the visuals. It is video art at its best.

Visually it recalls the appearance of a monitor screen displaying something like the rhythms of a heartbeat or alternatively the radar signals of incoming aircraft. Flight Tracks connects to both allusions given that the artist’s partner is a pilot flying in and out of Auckland. “The different colours and shapes,” Novak states, “represented the different emotional states our relationship was in at each time interval.”

Also in the show is a series of small works, 30 in number, entitled 30 Nights on Queen Street, prompted by the artist spending the same number of nights on the Auckland’s main street collecting promo material handed to him, mostly religious flyers to do with homophobic propaganda. In an act of purifying redemption, he recycled the flyers to make blank paper on which he printed his colourful abstractions. Poetic justice, art style.

These small framed works, ‘visual scores’, employ a minimalist aesthetic, usually no more than four triangular high-coloured shapes, where warm and hot pinks predominate. Rainbow community meets abstraction.There is a touch of irony in these configurations in that they recall, in close-up, aspects of stain-glass that decorate panes seen on ecclesiastical windows.

A further work in the exhibition, The Christian Man, continues the gay theme associated with religious control and repression. Its construction again engages with playful irony. A work on canvas, it employs acrylic, dye and red wine to cue the last supper and the narrative of Jesus’s imminent death, the death, some would claim, of a young homosexual man. The painting has an autobiographical touch in that the piece was inspired by the artist’s ex-partner who underwent conversion therapy, married a woman, had children and lived the straight life.

Parental reaction in the whole ‘coming out’ drama is a big factor in the gay experience, and in the artist’s case, his parents’ enlightened response becomes a point of celebration in two abstract portraits of them both. Using the same severe geometric forms from Open and 30 Nights, he differentiates between them by using more circular forms for the female and rectangular for the male. But the larger issue at work here is the idea that homosexuality is, in the end, simply a product of genetics.

Abstraction historically has taken myriad forms and been employed in a variety of causes, often quasi spiritual in nature. Novak in many ways continues this tradition, ringing the changes in terms of pulsing dynamic form and vibrant decorative colour, while working those elements in new ways (where design meets art) to explore and express the personal and political in the arena of sexual identity.