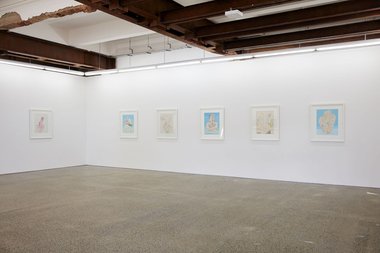 Of the thirteen works here, six were made in 1976, and make an intriguing suite. There is a churning symbolism at work, dominated by blue skies beneath which underground strata are alive, seething with unseen corrosive activity. In one a woman's torso seems constructed out of tumescent penises—a dig perhaps at the fascism of hetero male desire and also Freud, with his ridiculous castration theories with ‘male' templates placed over female bodies.

This selection of Vivian Lynn works on paper—drawings and prints that straddle the seventies—picked by Christina Barton, the curator of Lynn’s I, Here, Now, 2008 survey, should be of immense interest to those curious about early feminist paperworks in Aotearoa, and also those fascinated by Lynn’s sculptures, such as her extraordinary G(u)arden Gates now owned by Te Papa. Barton reminds us of the importance of printmaking, the value of that community (Lynn, Cleavin, Webb etc) in the late sixties/early seventies with its international bonds to artists like Hayter and Paolozzi, and how Lynn introduced a fetishistic eroticism coupled with a very early political edge.

It is great to have the chance to re-examine these drawn or printed images. One assumes Lynn was familiar with Georgia O’Keeffe’s legacy of ‘flower’ paintings at the time, their empowering nature for the artist, and judging from her contribution to Auckland City Art Gallery’s Anxious Images (1984), what an accomplished painter also Lynn herself was. (Looking at the catalogue, her Juggernaut (1982) is a memorably terrifying image, a monster that is pregnant).

Today, some of the images look a bit tired, and their titles corny, such as Erections I and II, critiquing male architectural monumentality. Others like The Hypocrites, and What a Conversation are astonishingly prescient in their satirical take on male chatter, being sardonic and vehemently scathing—an ornithological variation of mansplaining—dominated by gossiping gulls, gannets, pelicans and boobies: men maliciously talking about (not down to) women.

Of the thirteen works here, six were made in 1976, and make an intriguing suite. There is a churning symbolism at work, dominated by blue skies beneath which underground strata are alive, seething with unseen corrosive activity. In one a woman’s torso seems constructed out of tumescent penises—a dig perhaps at the fascism of hetero male desire and also Freud, with his ridiculous castration theories with ‘male’ templates placed over female bodies.

Lynn’s greatest achievement—in my opinion—is her body of ‘hair works’ of the early eighties (especially G(u)arden Gates, Stain, Self Portrait, Restoration Piece), sculptures that use human or synthetic hair to critique patriarchal dominancy but which cross-connect with other sculptures and earlier paintings. They are fascinating on many levels, and their conceptual complexity allows shows like this one to add to their resonances. With a symbolism that’s about empowering versus being controlled, they also reference head versus body versus pubic hair, genital versus botanical ‘gardens’, allure versus repulsion, geometry versus organicism, and community consensus versus strident individual will. They connect very cleverly with her vaginal Asherim installation and drawings.

As an artist Lynn dislikes being limited by the term ‘feminist,’ despite her profound contributions to that cause, and it is easy to see that she is mentally complex, plus there are internal, vacillating ambivalences, including a hatred as well as a love of the female human body. Plus her range of interests are so wide there are even science fiction elements in her art, all sorts of unexpected contradictory conflictual energies swirling around that draw you to ‘minor’ works that might shed light on her ‘major’ ones.

As I’ve hinted, to me not all of Lynn’s work is successful, the result perhaps of her driving, almost superhuman, energy where she experiments with many types of stylistically diverse methods. The installation, Gates of the Goddess, owned by Auckland Art Gallery, for example is overstated, theatrical and dated, plus laden with political problems (via the tapa) to do with cultural appropriation—but that’s easy to say in hindsight. I have a fantasy that maybe one day the magnificent G(u)arden Gates will be shown in Auckland. Te Papa and AAG could do a swap.

I have just heard that Vivian has passed away. A remarkable artist with many many facets, her extraordinary contributions to ...

I have just heard that Vivian has passed away. A remarkable artist with many many facets, her extraordinary contributions to feminist debate will always be hugely regarded--despite her vehement objections to such categorising. Our thoughts are with Jurgen and her family.