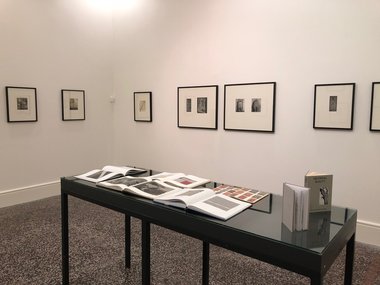 ‘Emotional' is an interesting word to apply to Walters paintings (it might surprise some), because the colourful gouaches and the black and white acrylic korus are intensely emotional by virtue of their hot hues or rhythmic formal construction. Yet I don't think the term applies to some of the other more schematic works which are clever and intriguing perceptually, but not viscerally stirring. They don't start palpitations. The best of the korus and gouaches do, and the early tree photos tap into that. They are a revelation.

On at the same time as New Vision—the magnificent touring exhibition of Walters paintings (up from Dunedin) that has just opened—Photographs is a satellite display put together by Laurence Simmons, one of the three curators of the AAG show. When taken these photographs were aids for Walters’ painting construction. They were not intended to be artworks in their own right—photography didn’t have that status here in the mid-forties—but were made to help his thinking in terms of composition: the placement of linear or shapely elements.

There are three types of gelatin silver print image: various twisted trees in desolate landscapes (c. 1943); Papua New Guinean, Aboriginal or Māori designs that he often discovered in museums; and his private documentation of preparatory collages, or completed paintings, that sometimes he later destroyed.

With the tree photos we can see how he is investigating dramatic contrasts between light and dark, getting a feel for such outdoors drama, and how in a year or two he begins to draw austere rocky landscapes in charcoal. The moody arboreal photographs are interesting because many of the buckled trunks and stretched out branches are anthropomorphic, appearing to be surrogates for the stressed, physically contorted human figure. They have an expressionistic, organic, highly emotional feel, surprisingly suggesting a distraught or anxious identification from the artist. This could be interpreted as a constructed persona or an authentic correlating match for the artist’s interiority.

‘Emotional’ is an interesting word to apply to Walters paintings (it might surprise some), because the colourful gouaches and the black and white acrylic korus are intensely emotional by virtue of their hot hues or rhythmic formal construction. Yet I don’t think the term applies to some of the other, more schematic works which are clever and intriguing perceptually—good to think about as shapely cerebral diagrams—but not viscerally stirring. They don’t start palpitations. They don’t agitate. The best of the korus and gouaches do, and the early tree photos tap into that. They are a revelation.

The photographic ethnographic records presented here show Walters checking out the design aspects of Papua New Guinean shields, Aboriginal bark paintings, Solomon Island clam shell carving, and Maori kowhaiwhai rafter painting. He admires these images at a time when many Pakeha art lovers would have dismissed these Pacific artefacts as ‘primitive.’ Walters found this material (discovered in institutions and private collections) inspirational. Drawing from the photographs, he later riffed on their formal visual qualities (in the sense of examining thematic variations and carefully selecting—not spontaneous improvisation) as he explored the activity of painting, extrapolating through a continuously developing modernist sensibility.

The other photos tell us a lot about Walters’ painting process. Looking at his images of collaged mock ups for paintings, you can detect the bumpy joins of the juxtaposed glued paper pieces, the roughness of this early stage of research where he recomposed by cutting up photocopies of earlier works and repositioning the sections. Then he did a more pristine enlarged version as an ink on paper drawing (clarifying the black horizontal shapes) after which he did the final acrylic/pva painting. The koru motif he straighted out and aligned horizontally while the ancestral figures from Maori rock drawings he turned into rectangles while straightening the limbs and making them vertical.

This show works beautifully with the Auckland Art Gallery presentation (it is only a few blocks away) so you can contemplate the two together, going back and forth, comparing related components. Note also that the Gus Fisher exhibition has a elegant Inhouse designed free catalogue with an informative essay from Laurence Simmons. It is well illustrated and very lucid—an excellent supplement to the wonderful New Vision publication. The photographs are up till 25 July, so take advantage of this exciting opportunity.