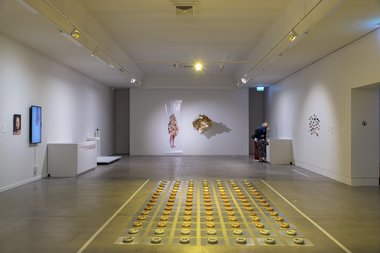 In 'The Language of Things', jewellery is not considered on only a personal level. Rather, the contemporary jewellers on display in this exhibition use jewellery and the idea of the self to explore wider issues. They are concerned with social, cultural and political matters, that are both wider than the self—but still encompassing the self.

International jewellery show
The Language of Things: Meaning and Value in Contemporary Jewellery

Think about the jewellery you’re wearing, if any. Most days I wear a watch, earrings, a few rings. But to me they are more than these four metal objects. Even looking at them, memories, stories and questions are evoked. They are not defined by their materials - gold, silver, gems and more, but also everything that underpins why I wear them. The Language of Things at the Dowse Art Museum draws out such feelings and examines how the value of materials has changed over time. Value, in this case, could be considered in monetary, cultural or sentimental terms. Personal meaning alongside jewellery does not only come from those stories and memories, but also can be triggered and associated with the materials that our precious objects are created from. Not only can these jewels stimulate memories for us and be valuable to us, they can also communicate these stories and values to others.

As the introductory wall text explains, over history, jewellery has been used as a symbol of ‘wealth or status’ and generally conveyed through the value of precious materials. A shift occurs at some point, and the preciousness of the material becomes secondary, in some instances in order to favour another value such as scent. In the 1940s and 50s jewellers begin to shift to more available materials and move beyond commerciality to make jewellery accessible for all—a complete paradox to its origins. As curator Sian van Dyk writes, by the latter half of the 20th century there is a ‘critique of preciousness’.

In The Language of Things, jewellery is not considered on only a personal level. Rather, the contemporary jewellers on display in this exhibition use jewellery and the idea of the self to explore wider issues. They are concerned with social, cultural and political matters, that are both wider than the self—but still encompassing the self.

The Language of Things is large—it takes over a good chunk of the Dowse’s main gallery. I enjoyed the curatorial choices. The spaces are both uncluttered and clear, but there is an abundance of artworks to view and admire. Some are large, others tiny. There is jewellery in the more recognisable forms such as bangles, and others that remain more conceptual, such as photographs—really pushing the boundaries of what we traditionally perceive as ‘jewellery’.

The exhibition begins with an unlikely medium to represent jewellery, the moving image. Conveying ideas of status and entertainment, Suska Mackert and duo Conversation Piece have videos displayed next to each other. Mackert films herself painting jewellery house names such as Tiffany & Co. and Cartier in her studio. Conversation Piece montage clips from movies featuring jewellery— such as ‘Breakfast at Tiffany’s‘ and ‘The Hunger Games’. Each video is very engaging and captivating, I didn’t skip on the viewing - which is a rare occurrence for me.

Renowned jeweller, Otto Künzli’s participation is marked by a seemingly plain black rubber bracelet. Titled Gold makes blind, 1980, it almost resembles a dog’s rubber chew toy. However unknown to us, unless you read the label accompanying the vitrine, is that the piece has a gold centre. Once worn long enough the rubber will deteriorate and the gold will show. The two materials are juxtaposed, rubber—usually associated with car tyres and other mass produced products, and gold—the most precious metal of them all. Wearing this bracelet takes on a whole new meaning—as the label suggests it will become more important personally than monetarily over time. Gold makes blind provokes a lot of questions about its wearer and materials. I wonder if the wearer takes on a challenge by owning this object, acquiring a sense of obligation to wear it until the black rubber fades into gold. Further, what if this obligation becomes a hindrance to the wearer, rather than providing pleasure. Assumingly it is a pricey object—Künzli’s artworks are high end—does the wearer necessarily like the look of the rubber bangle or is it the idea of the gold underneath that encourages them to purchase. Important to consider is what material is prioritised in this trade off. Or is the bangle simply a piece of art rather than a functional piece of jewellery. When and does this shift occur?

Liesbet Bussche’s Blueprint of an entire Jewelry collection in 11 pieces, 2015 is a poignant reminder of consumerism and marketing. Based on an article suggesting which generic jewellery women should buy, it comments on stereotypes of what women should wear and how they should behave. By using cyanotypes, or blueprints, Bussche alludes to the prototype, the original product that everything is based off and large corporations take advantage of. The cyanotypes are captivating, they are delicate yet strong, with the outline of shapes layered with a more photographic case. Each one is numbered (1-11) accompanied by a description from the article. I end up reading every account. For example, ‘Pendant: A pendant necklace is one of the best ways to express your personality.’ The thoughts of what is conveyed in jewellery is perpetuated by the article, outlining for the reader what their choice of jewellery says about them.

Tiffany Parbs touches on issues of gender and society, especially in relation to women becoming mothers and potential loss and self-sacrifice. Parbs covers her eyes and mouth giving a sense of anonymity in gold leaf, and her fingers bleed silver. Presented as a photograph beside a video, the artwork is striking and touching, staying with me long after I walk away.

Susan Cohn’s Way Past Real, 1994, suggests that authenticity in jewellery is not important. An installation on the floor of the gallery, it is made up of 105 perfectly round gold bracelets. They are all made of different make ups of gold, such as gold leaf, gold dust, gold paint etc. Our first impression—that they are all gold—is what’s important in this narrative. Then comes the realisation that we can get joy out of things not considered ‘authentic’. The jewellery does not necessarily need to be made from the most precious jewels and metals for it to be perceived as valuable. Being used to hearing and asking ‘is that real gold?’ or ‘what carat is that?’, we realise that there is a strong focus on the materiality of the object, rather than the value seen by the wearer of the piece.

The largest piece in The Language of Things is Yuka Oyama’s Helpers—Changing Hours, 2018. A large cardboard structure sits in the middle of the exhibition. It is accompanied by a videoed performance, and 3D printed models displayed as pendants. Oyama was Te Whare Hēra’s artist-in-residence from November 2017 to January 2018. As part of her residency, Oyama interviewed people about their experience with immigration, centring around the intimate relationship they had with the objects they bought with them, and if these in turn created a sense of home or belonging.

Oyama made seven sculptures. These were created out of moving company cardboard and able to be climbed into and walked around in by their participants—as if they were hermit crabs. The site of her performance was Wellington’s waterfront, a symbol of arrival with a strong connection to the city. It is an area of commuting, leisure and arrival when we see it driving into the city. Oyama also made pendants of 3D scans of the sculptures, representing souvenirs of home. Helpers—Changing Hours pushes our boundaries of what we believe jewellery to be, and what it is made of. It conveys that the material is not always the focus or value of the jewellery, but something very integral to its reading.

The Language of Things is a rich exhibition, with much to take on board. It demonstrates the significance of the messages and questions that are intertwined with contemporary jewellery’s premise and underpin the objective of these artists’ practice. The show encourages a consideration of the place of these specific artworks in the larger narrative of contemporary jewellery in the 21st century. If you visit, you won’t be disappointed. 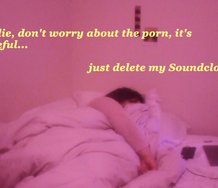 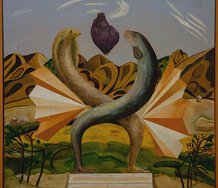 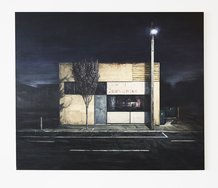 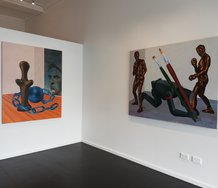