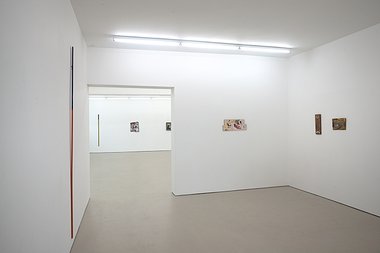 Four artists have here been juxtaposed by ex-pat Australian curator Rob McKenzie for this presentation that in its selection looks sideways at identity. The work mostly deals with sexuality, but is not all figurative or laden with symbolism. In this show, collage, expressionistic painting and drawing are dominant—with the overall emphasis on ad hoc improvisation and spontaneous energy. In this meditation on identity's uncertainty we have a mixing of opposites.

Four artists (two North American, one Australian, one Austrian) have here been juxtaposed by ex-pat Australian curator Rob McKenzie for this Hopkinson-Mossman presentation that in its selection looks sideways (I think) at identity. Two women: two men. Two of these artists are also occasional curators.

The work mostly deals with sexuality, but is not all figurative or laden with symbolism. In this show, collage, expressionistic painting and drawing are dominant—with the overall emphasis on ad hoc improvisation and spontaneous energy.

Ellen Cantor (1961-2013) was known in New York as a gifted curator, filmmaker and painter. She is represented here by a suite of small paintings that have not been shown before, and a couple of rhythmical pencil drawings. There are two sorts of subject-matter: two women making passionate love around giant tumescent male genitalia, and mythic scenes of a moonlit ocean with a large whale (Moby Dick) bearing down on a tiny ship. The two drawings have a delicacy and intricate layering not found in the more oafish and raw paintings, but maybe that is the nature of the medium.

Robert Bittenbender’s densely detailed, fetishistic collages are like a combination of Kurt Schwitters and Cathy de Monchaux, but emphasising found scraps of materials that have been abandoned. Thick and undulating—projecting out from the wall—they feature lines of hammered pins and nails, and wrapped-around silver wire, with impaled pieces of plastic drawn-on photographs, and street detritus, like crushed cans. With occasional torn photographs of studded leather harnesses or cocks they reference S & M (not exclusively gay), and body piercing, blending pleasure and pain.

Jennifer McCamley usually shows work in partnership with Janet Burchill, so seeing solo projects from her is quite rare—in Australia or New Zealand. One painting is a beautifully delicate, large watercolour of the late Chantelle Akerman, the feminist icon and radical filmmaker. In contradistinction to this luminous lyrical portrait she also presents three minimal abstractions. These are vertical two-colour wall reliefs that look like horizontally compressed Elsworth Kellys. As ‘slits’ made on an ash wooden support (not stainless steel with an industrial finish) they show a narrow band where a lower female body (or section of land) meets the higher positioned sky. Where they intersect reveals a join that is concavely feminine. They are like horizontal slices of undulating landscape that have been turned 90 degrees.

Josef Strau presents his beaten, uncrumpled, flattened metal collages on the wall mingled with tear-shaped texts that express his admiration of the famous Austrian environmental artist, architect and designer, Freidensreich Hundertwasser (1928-2000), who lived for 25 years in Northland. Hundertwasser, like Strau, was interested in combining colour with reflective metal patinas. Strau’s collages are abundant with peek-a-boo holes, through which can be seen canvas or paper stained with diluted acrylic. The tin appears to be a sort of fabric in the way it is treated, and different pieces have different rhythms.

When one reads Strau’s texts, one discovers that Hundertwasser, when young, joined the Hitler Youth movement to help hide the fact that he was Jewish. That split fits in well with the examination of identity proposed by Rob McKenzie here for the overall show—as in the works themselves (rather than his essay which gushily focuses on inspiration from the four individuals who exemplify the exhibition’s title). Nothing is clear cut when you look at the work; putative descriptions of a subject are always ambiguous; appearances invariably deceptive.

This most interesting show about selfhood (its spuriousness perhaps, when part of communities) presents artists very rarely seen here. Though the essay doesn’t provide much information about the specifics of selection, the work holds up. McKenzie’s unravelling combinations make it a must to visit.