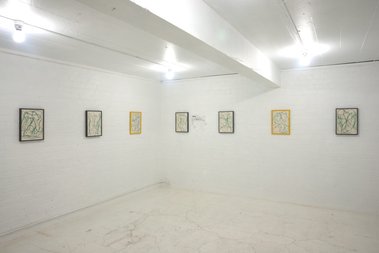 In that white bank safe you check to see if the curving Nau Sea images have been repeated or inverted, or the same ones duplicated and drawn on further. They haven't. Like the Kold video, the suite pushes the limits of memory and observation. You scratching your head and wondering.

Campbell Patterson is normally known for his carefully installed performance videos that explore process, though he often makes paintings and…thinking of his work…it was some of those that I last wrote about. Moods of Infinity features a suite of a dozen photocopied drawings, a painting and two video works, one with seven channels. At Michael Lett’s, his show is downstairs, with a dozen linear framed photocopies in the ‘white vault’ and the videos and a painting on the brick walls of the narrow surrounding corridors.

The green ink Nau Sea drawings, photocopied for archival reasons so they don’t fade, present overlapping curvilinear lines, arabesques that splay out at the line tips and condense in the ‘stalks’ in the middle. Framed in dark grey or yellow, they seem to have been made using clusters of pens that spread or overlap according to each twist of the artist’s wrist; they are also like Brice Marden in monoprint, but more complex and delicate. Spatially very intricate and weblike, they are dominated by arching, curvey rhythms with different densities of tone and thickness. Fascinating images.

Patteson’s painting is a flesh-coloured piano shape covered at the picture plane by a meshlike grid made from lines resulting from masked off string. It looks vaguely like a foreshortened looming animal constrained within a cage, and is intriguing.

The two videos are wonderful. Nostalgia is one channel and shows the artist in a darkened room lying naked on a mattress on a bed, facing the camera. On one side of the bed he lights two candles and on the other he lights two. They are flat candles in very small shallow dishes. The process involves moving the candles (one at a time) from side to side in a high arch, delivering each one to its opposite side and picking up another to bring back. As the candles melt the dishes fill up with molten wax, so Patterson has to be very careful not to spill hot wax on himself while he twists and turns his torso to convey the receptacles. The work stops when the candles start to extinguish. It looks like a strange ecclesiastical ritual, but with danger and potential pain mixed in.

The other work, Kold (beard, sock, glove, underpants, hat, sunglasses, t-shirt), has seven channels lined up on the corridor walls and going round a corner. Made on a winter’s night, the soundtrack is that of the artist shivering and the roar of traffic on a nearby motorway. The scene in each channel is a front porch overlooking a dark garden. Every now and then the artist appears briefly in six of the monitors. (In one he never shows up.) He is standing naked except for one wearable item: a tee-shirt, a pair of sunglasses, a Tibetan woolly hat, his undies, a black lefthanded glove, a tidy beard. (I visited this show twice: the first time there was a sock as well—as part of eight channels.)

Patterson’s installation shrewdly exploits the corridor corner. You have to move around it (back and forth) to check on each looped video, to see if the artist is present or absent—for you can’t see all of the screens at once. It’s teasing, messing with your perception and your memory.

The Nau Sea drawings are oddly similar because in that white bank safe you check to see if the curving images have been repeated or inverted, or the same ones duplicated and drawn on further. They haven’t. Again, the suite pushes the limits of memory and observation. You scratching your head and wondering.

Thanks for those clarifications, Campbell. Obviously I misunderstood the nature of the process, especially regarding the photocopies. Your explanation is ...

Hey, thanks for the review. I am pedantic though and can't help but leave this as a footnote. 1/ the ...

Hey, thanks for the review. I am pedantic though and can't help but leave this as a footnote. 1/ the ...

Hey, thanks for the review. I am pedantic though and can't help but leave this as a footnote. 1/ the drawings are not photocopies of originals but rather the originals themselves, drawings made by photocopying used dental floss. 2/ there were only ever seven channels to the multichannel video piece. I think the works list mistakenly referred to it as an eight channel work. The sock was there all along! 3/ no string is used in the making of my paintings. only paint and brush. Cheers :-)

Thanks for those clarifications, Campbell. Obviously I misunderstood the nature of the process, especially regarding the photocopies. Your explanation is much appreciated.
J