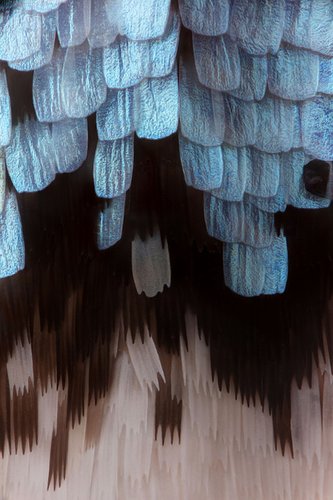 In this set of images the eight works featuring vertical or horizontal wing scales are in a league of their own. This is because of their quality of light, the way certain parts are localised, translucent and glowing, while other parts are kept in the shadows creating a mystical-type ambience. There is a particular mood in the light that the other works lack, a magical radiance, a mysterious form of back lighting that brings out the thinness of each fluttering scale.

The last show Fiona Pardington presented at Starkwhite was her exuberant photographic suite of little glass horse table ornaments, with colourfully lit backdrops and refractive distortions. This new work, recently presented in the Honolulu Biennial, goes off in a totally different direction, examining the obsessive butterfly collecting and scientific research by the brilliant writer, Vladimir Nabokov, famous globally for his stunning novel, Lolita. Nabokov’s scientific discoveries were taken seriously by other scientists. He was considered their equal, not a dabbling dilettante.

Through her friendship with Brian Boyd, the Auckland academic who has written and edited several authoritative books on Nabokov (including - with Robert Michael Pile - an edited anthology of Nabokov’s butterfly writings), Pardington - a longtime Nabokov reader - has been given access to Nabokov’s specimens, drawings, diagrams, Lepidoptera watercolour paintings, annotated reference books and index-carded notes, scattered amongst different libraries and universities in New York and Lausanne (in Switzerland), and so - using a special camera used for examining microscopic detail - she has zeroed in on tiny sections and blown them up macroenlarged.

Unlike her glass horse images which were hung separately along the walls, the 23 coloured images here are butted together in two groupings on opposite sides of the large downstairs Starkwhite space, in a densely positioned, sequential manner that we often see in Gavin Hipkins exhibitions. Pardington’s juxtapositions in comparison seem a little awkward and less fluid, the result I think of her very wide range of source types. Spatially they jump about.

Those familiar with Pardington’s wide corpus of photographs, or who saw her innovative touring survey, A Beautiful Hesitation, will recognise various formal and thematic preoccupations that resurface again here. The similarities between enlarged feather filaments and butterfly wing scales is one obvious example. Her interest in cursive handwriting, spelling mistakes and corrections is another.

In this set of images the eight works featuring vertical or horizontal wing scales, I think, are in a league of their own. This is because of their quality of light, the way certain parts are localised, translucent and glowing, while other parts are kept in the shadows creating a mystical-type ambience. There is a particular mood in the light that the other works (of whole butterflies or Nabokov’s handwritten notes and drawings) lack, a magical radiance, a mysterious form of back lighting that brings out the thinness of each fluttering (very soft) scale.

Some of these ‘wing scale’ enlargements look like the decorative parts of Māori cloaks, something Pardington obviously intended. Others look like carefully spaced apart brushmarks, the work of say, the Swiss artist, Niele Toroni, who places measured out isolated brush marks on gallery walls. They have that sort of cadence.

Two or three of the enlarged Nabokov drawings are absolutely intriguing. One knockout is an image of butterfly wings converted into a swirling map-like grid. The oddity of its propellerish shape and the diagonal alignment of its intersecting axes, make it an eye-catching, very distinctive sketch - an unusual chart or diagram.

In fact the best images here are the ones that make you forget these are butterflies at all, Nabokov’s ‘treasures’ which Pardington has documented. The enlargements which accentuate wing-scale rhythm and pattern, or inky tree-like, drawn spindly genital forms, become intriguing abstractions that make compelling viewing, rather than other shots (of whole insects, or rows of them) which could be regarded as conventional Lepidoptera illustrations.

If Pardington had presented half the number of works here, spread apart and carefully selected, the show would have been a lot more concise visually - but admittedly that would have been more oblique in terms of information. What she has done with her enlarging lens might not have been so clear in terms of the bigger process - and perhaps Nabokov himself might have been less conspicuous as a dynamic, formidably energetic personality hovering with a net in the background - but edited, the works collectively would have been more unified with greater impact.