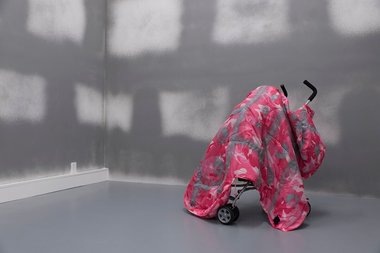 Charging the room beautifully, the lynchpin of the installation is on the floor - a cheap baby buggy covered by a painting, like a blanket designed to get baby to sleep, shielding the child from the surrounding visual noise. It speaks powerfully of the cacophony that surrounds us, delivering the data storm of the world outside the gallery into the space, and the need to find our own places of quiet. Blackout.

Are words here necessary at all? This is a show full of ideas, but fed principally through the eyes - and about making sense of the confusion that those eyes meet. The show is introduced beautifully in the installations shots gathered with this article. Robert Heald’s gallery is transformed.

There’s a real fresh visual wallop. I don’t intend to make broad comparisons but I’m reminded of great familiar formative ‘now I get it’ experiences of painting when seen in the flesh for the first time: Van Gogh’s Sunflowers at London’s National Gallery, a Rothko retrospective in Paris, a wee painting of a melon by Manet at Melbourne’s NGV or, recently McCahon’s ‘French Bay’ in AAG’s Freedom and Structure at Pataka. Words don’t need to translate. But here goes.

It was McCahon from whom curators and writers adopted the slogan “I will need words.” He felt the need. Arps flies in the face of that. Not as some revitaliser of abstract expressionism - though there is that - but because he smartly, potently, manages to both absorb this painting history and debunk it.

This exhibition expresses a heightened contemporary moment where that need for an artist such as McCahon to question but embrace faith can feel disingenuous. Arps though is not preaching his ambivalences. In one of a number of McCahonesque moments made new - a small acrylic on paper work - two words do appear: ‘No idea’. In another, I.T. features on blackboard, a whitewash horizontal dragging of paint between the letters. The natural inference is that Information technology can create as much daze as it does knowledge.

In the two large canvases the anarchy symbol is lightly visible in the circuit board worm paths of the paint. Heald directs me to the trademark Mrkusich triangular framing device in the corners of Untitled (Purple Haze). But again just as it embraces that abstract glory, at the same time it’s as if a kid has come in and defaced it. It strikes this balance beautifully. Artful art brut on frayed pieces of found patterned material.

Sensory overload, stepping into the gallery the work speaks to the brain as a test of its visual processing. Synaesthesia, where stimulation of one sensory or cognitive pathway slides into another, comes to mind. Individual works are hung against an impressive wall painting - Franz Josef - a rough spray-gunned pattern of vertical columns, horizontal beams in grey acrylic house paint. The aping of domestic walls about to be properly painted recalls the installation design of Auckland Art Gallery’s Necessary Distraction: A Painting Show of 2015-2016, in which Arps appeared. But where that felt trite and try-hard at the expense of the artists’ work (competing with them), Arps’ design here is in beautiful visual and conceptual rhythm with the collection of works on and around it.

The wall painting design could be McCahon’s capital Times New Roman ‘I’s conjoined, but the spaces in between each have a light spray blooms, like atmospheric cloud bursts. Again, the brain hovers between the action’s slap dash fill-a-wall nature and the resonances of other ideas.

Mostly though I’m reminded of whiteout, the weather condition in which visibility and contrast are severely reduced by snow. When matched with the large paintings my first thought is a recall of reading as a youngster Michael Guy’s 1980 ‘true account’ of the Air New Zealand Flight 901 crash on Mount Erebus, Antarctica (White Out!). The vivid recount from the recovered cockpit voice recorder of the pilots’ navigation aids and computer systems failing them, flying straight into the mountain when they thought they were above the McMurdo Sound, well to the West. History fails us as technology does.

The key shape in the first large painting Untitled (Educational Field) reads - as the subtitle suggests - as an instrument, but it’s undone. Like a piece of computer componentry placed over the found fabric pattern of polka dots, a data read-out of code is made stupidly human by the deliberately uneven and sloppy application of paint, leftover pencil markings and the visibility of the canvases grid beneath. It is both elegant and raw in its sophistication.

Charging the room beautifully, the lynchpin of the installation is on the floor - a cheap baby buggy covered by a painting, like a blanket designed to get baby to sleep, shielding the child from the surrounding visual noise. The base pattern is in fact a readymade turned inside out, a pink camouflage sleeping bag, with a grid of lines and circles employing the same grey house paint as the surrounding walls. It speaks powerfully of the cacophony that surrounds us, delivering the data storm of the world outside the gallery into the space, and the need to find our own places of quiet. Blackout.

The show is finished by a series of smaller works. Toughly painted symbols and diagrams are crossed out or debased. Life Study comes on like one of those eye puzzles. Look at it first and it’s a cartoonish image of a foot. Look at it again and I’m reminded of Len Lye’s paintings, with all their chemical synapses and body arteries and organs. A maggot in the brain neural passages. Not Yet Titled, highlighting the provisional fluid nature of everything Arps seems to be doing features the words ‘Fuck You’ and a thinly painted, crude warped swastika - reminiscent of early Peter Robinson work.

Arp’s title Tinnitis Miracle translates the visual into the audio. That sense in our lives that there is always a ringing and buzzing in our ears created by the ever-crowded cacophony around us. Yet in the word ‘miracle’ is for me a recognition that Arps’ is finding a way to translate all that accumulated crap and knowledge into visual impressions that navigate between the mess and a place of reflection.